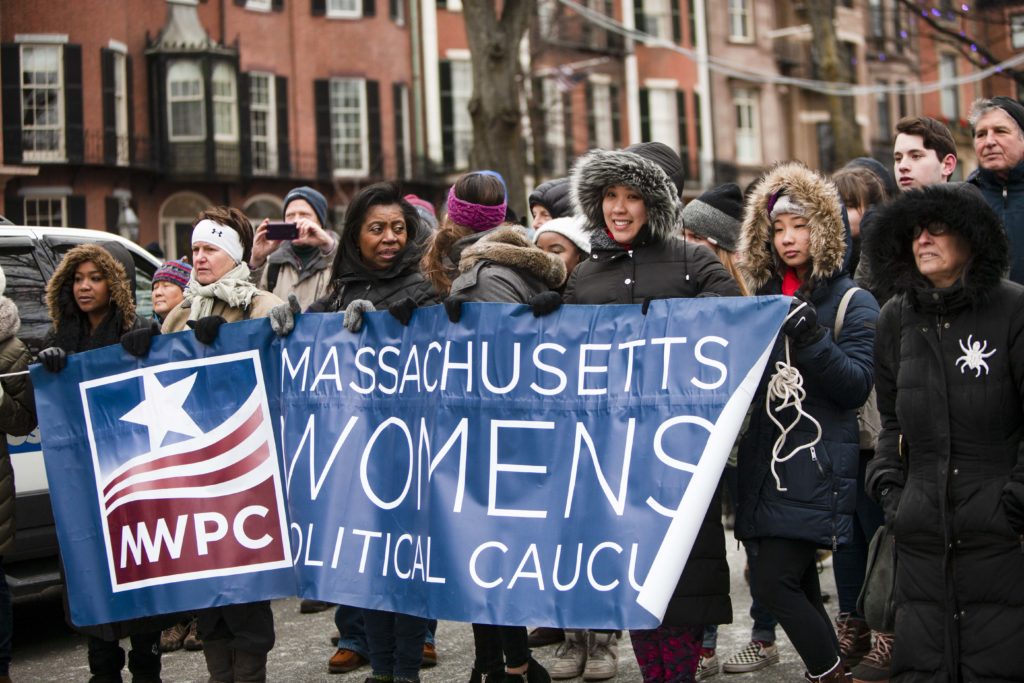 A woman peered to get a look at the Massachusetts Women’s Political Caucus (MWPC) banner, trying to read what it said. When she was able to see the name on the 10-foot-long flag, she went up to Laurie, executive director of the MWPC, who was standing in the middle and shook her hand.

“You endorsed me in 2012,” she said to the row of people who had gathered for the third annual Women’s March in Boston Common.

“She” was Sarah K. Peake, the representative for the fourth Barnstable District in the House. Just more than eight years ago, she was one of the female candidates supported by the MWPC. Each year, the organization filters through the dozens of applications submitted by women seeking support. Its goal is to increase the number of women in public office.

Ninety-two percent of female legislators in Massachusetts are endorsed by MWPC. Many of them find their start in politics with school boards, Laurie explained, before moving on to local or state government.

One young woman named Antonia stopped when she saw the banner and walked up to the group holding it. She said she’s been meaning to try to get more into politics, but doesn’t know how. Laurie told her about the endorsement part of the MWPC, offered her card, and told Antonia to send her an email. Antonia wasn’t the only person to stop and check out the group of women with the hard-to-miss sign.

Mass. Senator Ed Markey walked up wearing a hot pink scarf—”Like my scarf?”—and asked to take a picture. The MWPC members greeted him with enthusiasm, asking if he was going to be marching with them again, as they said he did two years earlier. He laughed and took his place behind the banner, before disappearing backstage again.

For the march in 2017, the MWPC was a fiscal sponsor, meaning that it lent its legal and tax-exempt status to the Women’s March, giving it a larger role in the march’s assemblance. Although MWPC has not reprised its role, Laurie did serve on the steering committee, which consists of women from a variety of social justice backgrounds.

The executive director chatted about her experiences in the MWPC and on the steering committee, often pausing to admire the signs that were passing by as people headed closer to the stage.

“I love your p—y hat!” Laurie called out more than once, referencing the pink cat ear-like knit hats that have become a symbol of female empowerment since the first march in 2017.

Caitlyn turned to Emily, the president of MWPC, and pointed out a sign that someone had just put up in the air ahead of the group. The sign read “You should run for office more.” The two laughed and voiced their approval of the message.

Throughout the day, the group evaluated the size of the crowd compared to past years. The first year, Emily said, the event was so crowded that you could barely walk. People were pushed all the way to the police barricades on the edges of the Common. This year, though, the crowd was congregated in front of the stage, with plenty of breathing room.

The lower turnout could be because people don’t think that there’s a point anymore, but there is, Caitlyn said. Deloris, treasurer of the MWPC and director of Internal Audit at Boston College, said that some people feel that there isn’t enough unity within the march and that there’s no direct issue that they’re pushing for. Still, she said, the march sends a message that women have a voice.

Other possibilities that the women floated were that there wasn’t enough publicity. Emily said that her all-women gym had been sending out reminders, but some of the others said they hadn’t seen advertising for it at all outside of the MWPC.

Deloris turned to her daughter Mira, a junior in high school who came along with her mother to the march. Deloris asked if she’d seen anything for the march on Instagram, to which Mira replied, “no.” Mira said that some of her friends were going to come to the march, but a lot of other kids her age just aren’t politically active.

As the speakers neared an end, the group moved closer to the stage—nobody wanted to miss the words of Ayanna Pressley, Massachusetts’ first African American woman in Congress. Laurie and some of the others from MWPC chatted about her cadence, saying that her voice sometimes sounds like a preacher’s. When the Democrat came to the stage, the women cheered and clapped, nodding along to her words and putting their hands up in support.

As the speeches wrapped up, the group quickly did a 180, getting its banner in position along the walking route. As the rest of the women at the march assembled to begin their walk, the MWPC stood at the front of the line, waving and waiting to step off for their third march. 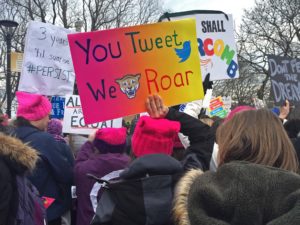