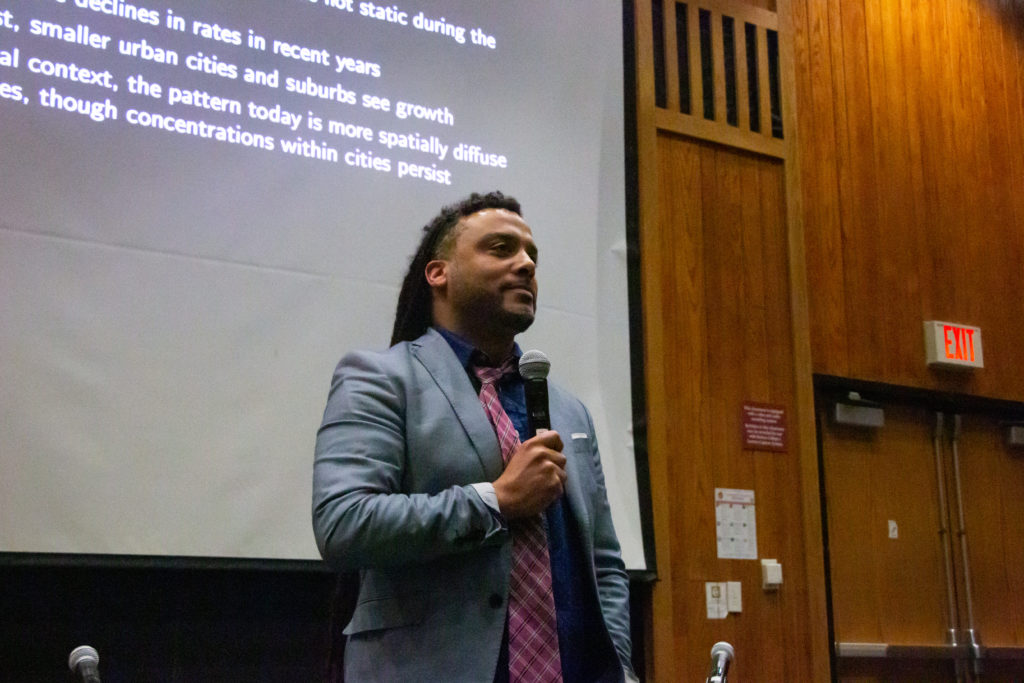 This year’s second Rise3 Symposium—Race, Place, Poverty, and Outcomes—explored the social disadvantages caused by incarceration through the findings of Adam Foss, a former assistant district attorney in the Suffolk County District Attorney’s Office, and Jessica Simes, a sociology professor at Boston University.

The United States has undergone a radical social transformation driven by high incarceration rates, according to Simes, and racial disparities are a defining feature of the U.S. criminal justice system.

“Place has enormous implications for both the social meaning and the practical consequences of incarceration,” she said.

Mass incarceration and durable neighborhood inequality are fundamentally linked, Simes said. In Greater Boston, poverty and violence have been concentrated in historically black neighborhoods, including Roxbury, Mattapan, and Dorchester.

“There is a subtle racism in assuming that just black neighborhoods have very high incarceration rates,” she said.

High incarceration rates are found in neighborhoods where the population is almost entirely white, Simes said, citing Fall River and Brockton as examples.

“Race is a strong predictor of incarceration,” she said. “It is particularly pronounced in the smaller cities, meaning that a large portion of the non-white population in small cities is going to prison.”

This diffusion is due in part to gentrification, Foss said. The former assistant DA was named one of the 100 most influential African-Americans by The Root in 2016. Foss, who has lived in Dorchester for 10 years, said he noticed that his neighbors don’t look the same way they used to.

“This is one of the greatest human and civil rights crises of our time, and its happening on our watch,” he said. “We’re about to leave it to kids. So we have to do something about it.”

“It’s a shame and an embarrassment that we don’t want to be remembered for 50 years from now—the same way that we look at images of 50 years ago,” Foss said.

Mass incarceration could end in four years if society could figure out a way to keep people out of prison, Foss said. In the moderated debate, Foss and Simes discussed the potential policies that should be put in place to help solve mass incarceration.

Simes said that if she were to put a policy in place, she would subsidize housing for women who are housing the people coming out of prison.

“People need to live somewhere, and the lack of dignity and offerings in terms of housing is a total black mark on the greater Boston area, in particular,” said Simes. “People have nowhere to live. We don’t have a good handle on housing insecurity because we don’t define homelessness in the right ways.”

Housing is the number one need expressed by people who have been affected by the criminal justice system, with transportation and reinstating driver’s licenses being the next most important, according to Foss. As a result of gentrification in major cities, re-entrees are forced to live farther away from where they’re employed in homes that they can afford, often without access to public transportation.

“We create some utter paradoxes and contradictions in how people are supposed to access their resources,” Simes said. “You can’t get your license reinstated, but then we expect you to be at this job that you are supposed to drive two hours to. You’re violating parole if you don’t keep that job, so you’re going to drive without a license, which is also a parole violation.”

Foss and Simes highlighted the flaws in governance and how the racial disparities in incarceration are a form of social deprivation. They proposed changes to policies surrounding housing and transportation post-prison, in order to position people in the best situation to succeed.