Home » Mindful of Boston’s Past, Mikkelsen Supports its Next Generation 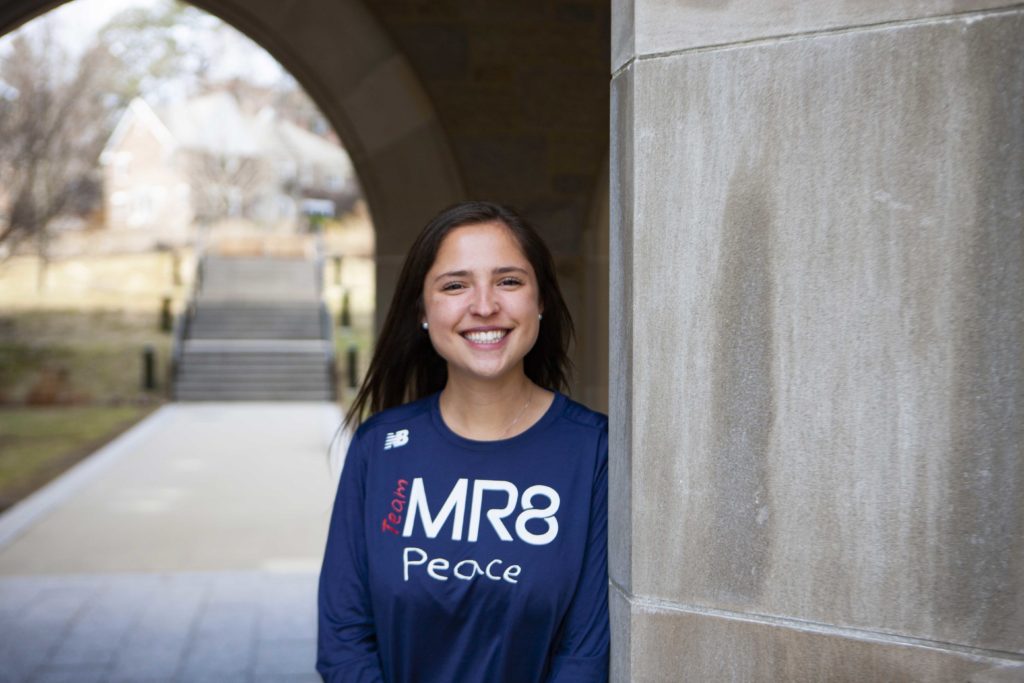 Mindful of Boston’s Past, Mikkelsen Supports its Next Generation

After two bombs exploded at the Boston Marathon back in 2013, killing three and leaving countless injured, Boston unified in strength and decided as a community that it would endure beyond the hateful actions of one dark day. As months of recovery progressed, a spirit of resilience permeated throughout the city.

When Mallie Mikkelsen, MCAS ’19, arrived in Boston to tour Boston College and witnessed firsthand the community and action of a city still rebuilding, she was instantly struck by that very aura of tenacity its citizens embodied.

“I remember seeing all of the memorials and things that were still set up around the finish line,” she said. “I thought that was very meaningful and showed the community around the marathon.”

On Monday, April 15, five years after being inspired by Boston’s response to that horrific day, Mikkelson will continue the Beantown tradition by running in the name of a charity named after a young boy killed in the 2013 terrorist attack.

The Martin Richard Foundation was created in memory of Martin Richard, an 8-year-old who was one of the three people killed in the Boston Marathon bombing. The organization focuses on helping young people spread peace and engage with their communities through projects like the Kindness Library, which provides children with diverse and inclusive texts that promote kindness and open their eyes to new perspectives.

Now, Mikkelsen has been given a chance to take part in the community that had sparked her desire to run the marathon in the first place, with the added benefit of connecting to one of the definitive aspects of her time at BC: kids. Mikkelsen, who has been a nanny for the past four years, worked at a preschool as a freshman. Looking to continue her involvement with children, she decided to serve as a tutor within the PULSE program her sophomore year.

The marathon is not the only goal Mikkelsen is accomplishing this year, though. She is also closing out her time with the Office of First Year Experience (FYE).

“Similar to running the marathon, I loved my freshman orientation when I came here,” she said. “I told myself, ‘This is something I really want to do […] I want to give back. I want to provide the experience I had for freshmen coming in.’”

She began this journey by taking Courage to Know, going on 48Hours, and trying to meet the people who worked in FYE during her freshman year. That summer, her dream of being an Orientation Leader came to fruition.

Her journey with FYE did not stop there. She has since led 48Hours, and this past fall, she was a teaching assistant for Courage to Know with Ryan Mulderrig—the same professor that she had as a freshman, who is now assistant director of academic advising and a big supporter of Mikkelsen.

“She just has the best disposition ever, she’s always with a smile on her face, and I think sometimes people overlook her intelligence because she gives off such a warm and kind of fuzzy disposition that you forget that she’s also brilliant at the same time,” said Mulderrig. “She’s just one of the nicest, most genuine people you’ll meet.”

Mikkelsen has treated others with that same cheerful demeanor that Mulderrig describes, but she was surprised when all of that love came right back to her during her fundraising for the marathon.

“[Fundraising] was honestly what I was most nervous about,” she said. “Especially going into it, like I said, I can make myself run faster but I can’t really make people give me money and donate.”

At first, she tried to focus her fundraising back home in Washington. Her efforts didn’t go as well as planned, so she refocused on reaching out to people in Boston, despite not having many family members or friends outside of BC. She worried about not being able to reach her goal. But she was overwhelmed by the support she felt from those at the University and beyond. She specifically recalls a fundraiser she held earlier this semester at Cityside as the moment when she realized how many people she had in her corner.

“I was shocked and amazed by all the people that came—people that I wouldn’t even consider my close friends, necessarily,” she said. “It was friends of friends who were there that had heard and were really excited for me, and that was the first time that I realized how much support I had from people at BC.”

She also found unexpected support from acquaintances in the Boston area, even receiving a surprise, generous donation from her boss at a summer internship.

This support has also extended to her training for the race, which has been both a rewarding and challenging aspect of her marathon journey.

Around the end of February, right when Mikkelsen felt like she was making the most progress, she faced a setback. She strained her foot and had to take a few weeks off, missing some crucial long runs. She worried about whether or not this would impact her ability to continue with her training plan, but again, the Boston community rallied around her. She credits those people who cheered her on with helping her complete her longest training run with other charity runners yet.

“[We] recently had our longest run which was 20 miles, and I was pretty nervous for it since I had missed a few long runs,” Mikkelsen said. “I was thinking ‘Geez, I don’t know if I’m going to be able to finish this,’ but just the number of people that came out, not even in downtown but even as far out as Wellesley—the whole main street was lined with people cheering, and it wasn’t even the marathon, it was literally just a training run—seeing people out there every weekend who don’t have to be is very rewarding and encouraging.”

The glory she felt on that day in February was just a taste of what will come next Monday, as Mikkelsen plants herself as part of Boston history, fulfilling the inspiration she witnessed five years ago and helping the city that has become her home over the past four years continue to carry on its tradition of strength and resilience.