With summer right around the corner and the Jonas Brothers finally back together, fans can expect “Cool”—the second single from the recently reformed trio—to be gracing their stereos often in the coming months. The music video, released on April 5, depicts the Jonas Brothers throwing an old-school beach party on the warm shores of Miami Beach.

“Cool” is full of homages to ’80s culture as well as references to their Disney days. Reminiscent of their “Burnin’ Up” music video, this video begins with the Jonas Brothers performing poolside for a group of older women at “bingo night.” The boys, decked out in Miami Vice-like attire complete with matching shades, are the picture of suave as they perform for the admittedly rowdy audience.

The video pans out in a three-part act, with each of the brothers getting up to their own shenanigans. In one scene we see Nick strutting down a brightly lit Miami street trailed by an orange ferrari. Two lines of dancers flank him, all dressed in colorful outfits on par with the ’80s theme. Nick even takes the time to shamelessly advertise his fragrance in collaboration with John Varvatos, spraying a healthy dose all over himself before blowing a kiss to the camera. Another scene finds the brothers on the beach, Joe belting out the lyrics with a boombox hanging off his shoulder evocative of John Cusack in the classic ’80s film Say Anything. A third scene finds Kevin on a boardwalk, two vibrant parrots hanging atop each arm before cutting to a shot of the brothers winding down on a yacht at the end of the day.

“Cool” lacks a coherent storyline, but the Jonas Brothers seem to be having enough fun to make up for it. If there is any fault to be found in their latest music video, it’s that Kevin is severely underutilized. While it may be hard to give him a larger role, considering he acts mainly as the band’s lead guitarist, he deserves a part in the music video that is at least equal to that of Nick and Joe. Nonetheless, “Cool” serves up a fresh dosage of summer fun and assures fans that the Jonas Brothers are here to stay. 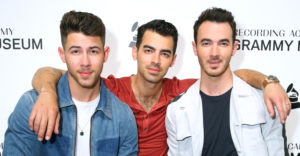