In their first holiday tune in 11 years, the Jonas Brothers manifest the elation of eagerly sprinting down the stairs on Christmas morning and the warmth of a freshly baked peanut butter Hershey Kiss cookie. More precisely, though, the song acutely emulates the true essence of the holiday season: spending time with loved ones.

Nick’s melodious vocals begin the toe-tapping festive anthem and once again remind us all that the Jonas Brothers are back. The jubilant, lighthearted energy crescendos throughout, as euphonious harmonies create layers of sonic joy.

Although the band embeds clichés referencing “the snow on the ground, the love in the air,” brassy trumpets and silver bells successfully drown them out. The message fails to unearth any revolutionary wisdom, but the simplistic and altruistic lyrics ultimately come off as refreshing. In “Like it’s Christmas,” The Jonas Brothers will indubitably urge you to throw on your reindeer pajamas, record Elf on your DVR, and get in the holiday spirit.

“Into the Unknown” – Panic! At the Disco

In a cover version of the lead song in the Frozen 2 soundtrack, Brandon Urie’s astounding vocals cannot mask the ambiguously banal lyrics of a number that seemingly lacks substance. Eerie but off-beat questions such as “Are you out there? Do you know me? Can you feel me? Can you show me?” accompany electric guitars and heavy percussion, resulting in an angsty attempt to portray Elsa’s deepest moral convictions. Although the instrumental in this Panic! At the Disco cover is intriguing, no rendition will live up to the empowering and lyrical instant classic that is “Let It Go.”

“Push My Luck” – The Chainsmokers

Saturated with vacant lyrics and over-synthesized electronics, “Push My Luck” begins with the inadvertently comical rhyme “Yeah, we met over sake, might have started off rocky.” It then persists with soft vocals and light acoustics that ultimately create a soothing yet imminently forgettable melody. In this desperate attempt to recreate “Closer,” The Chainsmokers once again write about a roommate and a mattress, but fall evidently short in a scattered composition of rhetorical questions.

jonas brothers Frozen the chainsmokers panic! at the disco like it's christmas frozen 2 push my luck
Eagles Use Third-Period Rally, Defeat BU in Battle of Comm. Ave
mxmtoon Brings Teeny Authenticity to The Sinclair 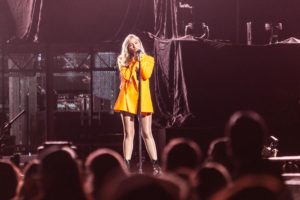