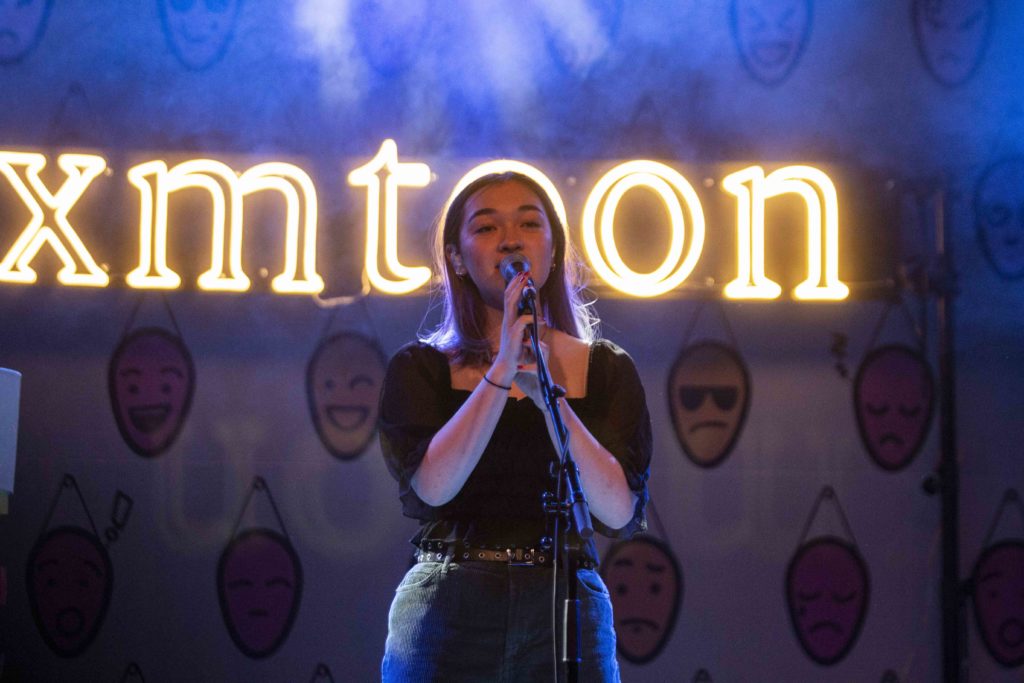 At her Boston show, mxmtoon told the packed crowd of teenage girls that when you step into her concert, you “voluntarily step into the emo zone.” The Sinclair became the “emo zone” on Friday, and proved the perfect venue for an intimate and memorable show from mxmtoon, a 19-year-old California native also known as Maia.

The stage was set up with a fuzzy rug, a lamp adorned with origami, succulents, and of course, a Peppa Pig stuffed animal. All of the decorations perfectly matched the lo-fi mood of mxmtoon’s second studio album the masquerade, which made the listeners feel as if they were reading straight from the unedited pages of a teen’s diary, or better, their unedited TikTok drafts—as mxmtoon often uses the popular app as an outlet.

Immediately before mxmtoon took the stage, an altered, synth version of opening song “blame game” was teased while the audience buzzed in anticipation of mxmtoon’s entrance. She eventually walked out, ukulele in hand, and completed “blame game” before chatting with the audience a bit about her cowboy hat, which she wore because she “had a point to be made, period.” Next up was “unspoken words,” where she expressed her love for Boston by altering the lyric “I love you, you know it’s true,” to the exclamation “I love you, I do Boston!”

This relatability extended throughout the entire show, whether it was through her humor or song lyrics. At multiple points throughout the set, mxmtoon joked about having the “bubonic plague” (the common cold), and upon dropping her ukulele, she laughed along with the audience at her stumble. Before “suffice,” a song about being unable to express your love and thus sufficing for friendship, mxmtoon offered a “group high-five” between her and the crowd. These intimate, wholesome audience and performer moments made hard-to-swallow lyrics like those in “suffice,” which read, “I have only loved without confession / I’d rather settle for a never-ending stream of self-questioning” much easier to digest.

mxmtoon continuously strummed her ukulele, giving the entire concert an acoustic feel. Deeply emotional songs were able to shine brightest this way. “late nights,” written when she had only 200 Soundcloud followers, and “untitled” are best heard stripped down and vulnerable, just the way the lyrics tug at feelings we would all rather forget. The show eventually transitioned into a completely acoustic set, bringing back equally tear-jerking tracks like “feelings are fatal,” from her debut album plum blossom. Here, mxmtoon reminded the audience that “it’s okay to cry.”

Even her most high-energy songs allowed the audience to embrace their emotions. During fan-favorite “seasonal depression,” the audience sang along flawlessly to upbeat yet earnest lyrics about staying in bed all day and lacking motivation. Clearly, the crowd understood teenage angst and was not afraid to show it. The defining moment of the set, however, came when a disco ball descended as mxmtoon sang “prom dress,” one of her biggest hits to date—partially due to its TikTok popularity—which digs into the emptiness of high school with the lyrics “I’m sitting here crying in my prom dress / I’d be the prom queen if crying was a contest.”

Ultimately, mxmtoon succeeds because her audience, comprised heavily of angsty Gen Z-ers, can relate to everything she does and sings. This was echoed throughout her entire show, where she identified with the crowd through memes—“Peppa, what are you doing at the mxmtoon concert?”—all while knowing when to allow for a moment of vulnerability. From deep acoustic moments to wistful high school memories, mxmtoon’s concert was like crying in your prom dress, but in the best way possible.