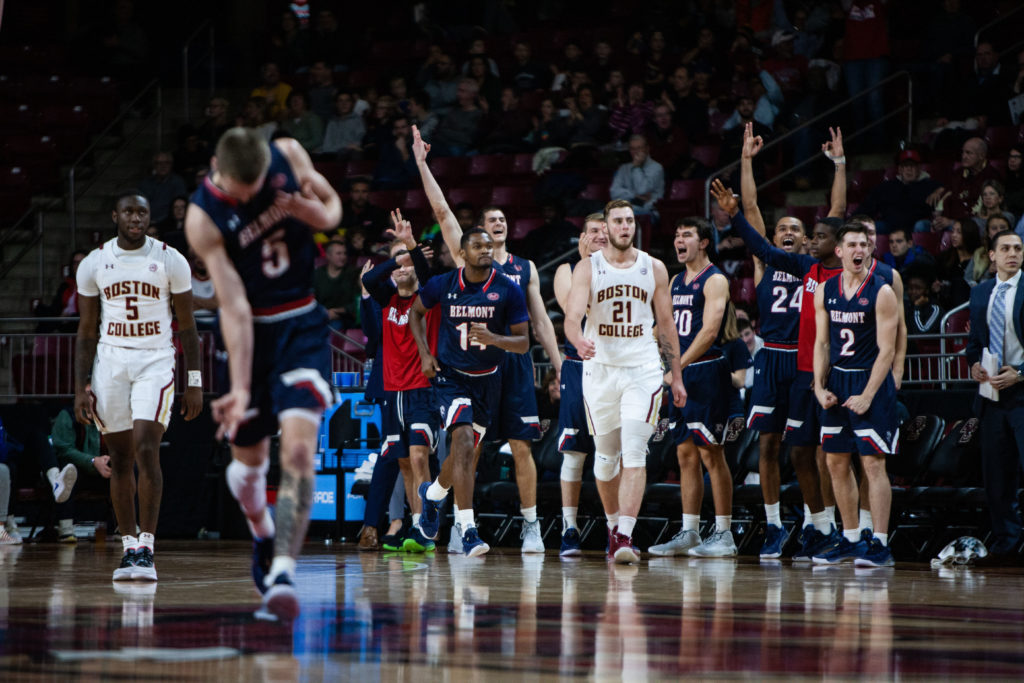 Coming out of halftime, it appeared that Boston College men’s basketball and Belmont were in for a good old-fashioned shootout. The teams had combined for a whopping 94 points in the first 20 minutes of Saturday’s Gotham Classic matchup, and were shooting a combined 58 percent from the floor. The Bruins certainly upheld their end of the bargain. The Eagles, on the other hand, did not.

In the first eight minutes of the second half, Belmont simply couldn’t miss, sinking 9-of-11 shots from the floor and nailing six 3-pointers. BC, meanwhile, went cold, scoring just nine points and routinely falling asleep on defense. The 30-9 swing put the Eagles in a 25-point hole they couldn’t recover from, and when the final horn sounded, the Bruins had handed BC its first loss of the season, 100-85.

On Wednesday, in the first game of the Gotham Classic, the Eagles (3-1, 1-0 Atlantic Coast) suffocated High Point, holding the Panthers scoreless for over 10 minutes at the start of the second half and limiting them to 33 total points.

Against Belmont (2-1), though, it seemed like defense was optional for both teams throughout most of the first half. The Bruins hit the 33-point mark with eight minutes to play in the opening period. In fact, BC and the Bruins combined to begin the game 27-of-40 from the floor, and entered the locker room a combined 12-of-22 from beyond the arc.

It was a breathtaking display of offensive basketball, and it was made even more entertaining by the fact that neither team could manage to pull away in any significant fashion. After Nick Hopkins buried a triple from the left corner to put Belmont up, 10-7, early, BC’s Nik Popovic immediately responded with the first of his three 3-pointers to tie the game. The largest lead either team had in the first half was five points, and that came after Derryck Thornton—who finished with 15 points and a team-high seven assists—forced a turnover and fed Popovic for an easy two points down low to put the Eagles up, 22-17.

In a sequence that was the story of the first half though, Belmont’s Adam Kunkel, who entered the game averaging a team-high 20.5 points per game, answered the very next possession with a 3-pointer, Grayson Murphy hit a layup and a free throw, and the Bruins reclaimed the lead. The teams would trade runs from there, before another 3-pointer from Hopkins—who ended 4-of-5 from deep—and a layup at the buzzer from Kunkel put the Bruins up four at the break.

To start the second half, however, Belmont made the run that defined the game. On the first possession of the period, the Bruins switched to a 2-3 zone and Jay Heath knocked down a jumper from the elbow. It appeared that BC was going to be able to continue to score at ease.

Yet, over the course of the next four minutes, the Eagles mustered just four points—an and-one layup from Steffon Mitchell and a free throw from Thornton—while Belmont continued its scorching pace from the first half. Nick Muszynski—the reigning Ohio Valley Conference Freshman of the Year—hit a hook shot from the left side, Murphy and Kunkel scored six consecutive free throws, and Michael Benkert sunk a pull-up 3-pointer above the break in transition to give the Bruins a 62-51 cushion.

Belmont didn’t stop there. Instead, it kept lighting it up from deep. Kunkel hit a shot from behind the arc, before Ben Sheppard and Hopkins added triples of their own. To cap the onslaught, Kunkel added a 3-pointer, before Hopkins tacked on one last exclamation point, sinking the Bruins’ 14th trey of the contest and putting Belmont up, 79-54 with just eight minutes gone by in the second half.

That deficit was simply too much for the Eagles to overcome. Mitchell banked home a layup to cap a 7-0 run that narrowed the Bruins’ advantage to just 18 points, and Thornton went coast-to-coast for an acrobatic and-one, that brought BC a little closer. Nevertheless, the Eagles—who were perhaps shaken by the offensive clinic that the Bruins were putting on—couldn’t piece together any form of coherent comeback.

Just after Thornton’s old-fashioned 3-point play, the graduate transfer lost his cool and picked up a technical foul after slapping the ball out of Kunkel’s hands near half court. Kunkel—who finished with a game-high 35 points and was a perfect 10-of-10 at the line—knocked down all four shots from the charity stripe that followed, ending any hope BC had of a late rally.

“I don’t think we stayed composed at all,” Christian said. “I think that starts with our older guys, that’s their job. I thought they were the ones that were not composed.”

Fittingly, Belmont hit the century mark in the waning moments of the contest, an emphatic ending to a brilliant Bruins display.

The way Belmont carved up the Eagles’ defense, which came into the game ranked 56th-best in the country per KenPom, raises questions about how good BC’s defense really is despite a solid start. All game long, the Bruins had the Eagles chasing shadows on the defensive end, getting into the paint at will and often swinging the ball around the perimeter for easy looks from behind the arc. The reality is that BC’s offense—which shot 55.9 percent—played well enough to win the game. The Eagles just couldn’t get a stop to save their lives.

“Nobody on our team, nobody, played well,” he added. “Nobody. There was not one person on our team that did what we needed to do on defense to win this game.”