Home » The Sharps Travel Back to Prehistory for Spring Cafe 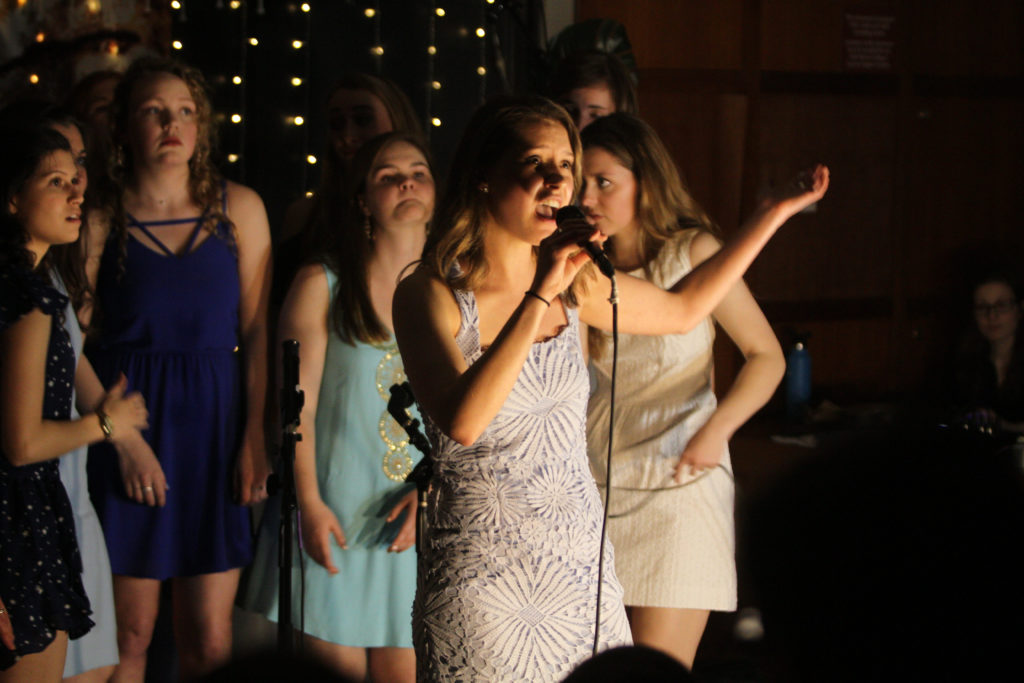 The Sharps Travel Back to Prehistory for Spring Cafe

For its spring café, “Stone Age Sharps,” Boston College’s only all-female a cappella group journeyed back to prehistory. Cave drawings adorned the blackboard in Cushing 001 for the April 12 concert, tropical leaves decorated the room, and a miniature T. rex perched on one of the speakers.

The group began with a soulful rendition of Queen’s “Somebody to Love,” with Lilly Higgins, MCAS ’20, as the lead singer. While it was a loving rendition, the Sharps didn’t hesitate to poke fun at the melodrama of the song. Harper Barbaree, MCAS ’22, performed a passionate air guitar solo that drew chuckles from the crowd, and while the supporting singers repeated “Find me somebody to love!” they peered around the room frantically.

“New Rules” by Dua Lipa provided another opportunity for drama. The performance was loaded with energy from the rich, powerful voice of soloist Michaela Chipman, MCAS ’19, to the peppy beatboxing. The supporting singers raised the tension during the pre-chorus, motioning with their hands to emphasize the “rules” of the song, raising their voices in pitch and volume in the process.

Bishop Briggs’ “River” has been understandably popular with a cappella groups in recent years, but soloist Caitlin Mahon, MCAS ’21, managed to put her own spin on the song. Her snarling voice ripped through the chorus while the other singers swayed and stomped in time to the beat.

Halfway through the show, the Maine Steiners, an all-male a cappella group visiting from the University of Maine, charmed the crowd with a jazzy cover of Jason Mraz’s “Remedy” and a medley of beloved Disney songs.

The crowd cheered as the Sharps returned dressed in outlandish Stone Age costumes. Fred, Wilma, and Pebbles Flintstone made appearances, as well as a dinosaur, an archeologist, and a leopard.

The show took a somber turn with a rendition of Billie Eilish’s “When the Party’s Over” by Bianca Tjoeng, MCAS ’22. Tjoeng’s voice was laced with emotion, and the group made use of stark pauses to heighten the lonely ambience of the song.

For their final song, the Sharps invited former members to join them on stage, and a few took them up on their offer. The group performed a joyful cover of “If I Can’t Have You” by the Bee Gees. In the song’s final moments, the audience joined in to clap, bringing a night of goofy theatrics and musical prowess to a satisfying conclusion. 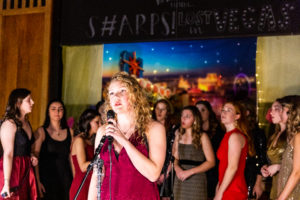