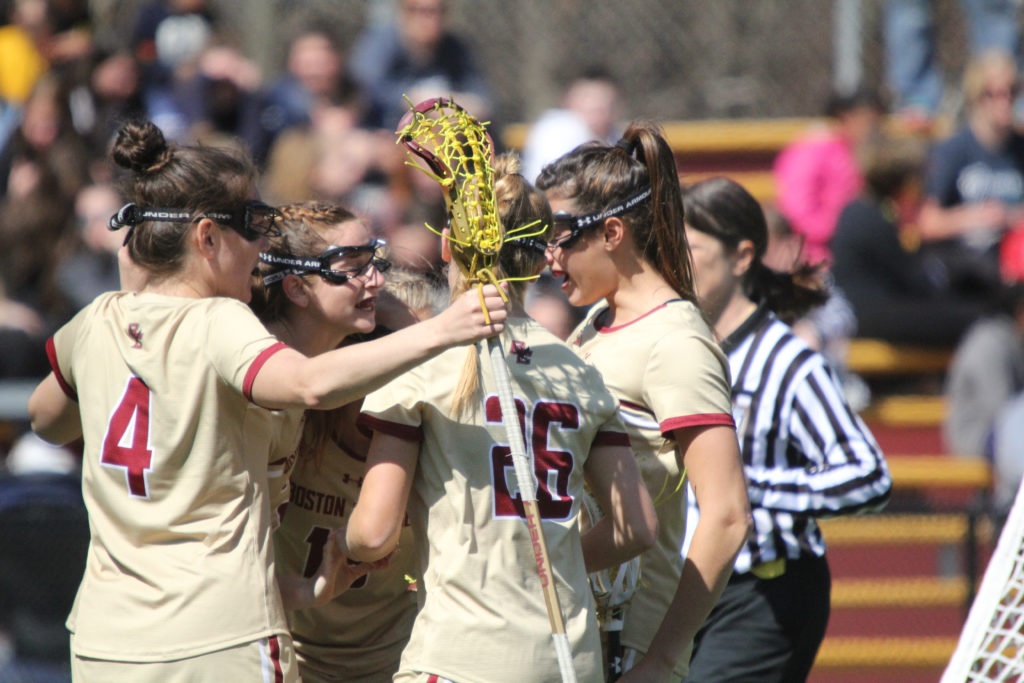 For the second straight season, Boston College lacrosse finds itself in the ACC Tournament final against North Carolina. The Eagles nearly didn’t get there, using a late comeback to defeat No. 4 Syracuse, 14-13, in a rainy semifinal. Their reward? Playing against the No. 3 Tar Heels, who handed BC its first loss of 2018 on this very stage. The Eagles (19-0, 7-0 Atlantic Coast) beat UNC earlier in the season in Chapel Hill and will be playing in front of a home crowd Sunday, but should still expect the toughest of tests from the Tar Heels, who have made it to the ACC Championship an astonishing five seasons in a row.

How to watch: The game will be livestreamed on ACC Network Extra and broadcast on NESNPlus.

What to expect from UNC:

The Tar Heels are a perennial conference powerhouse, as their five consecutive appearances in the ACC title game show, and this year is no different. UNC (14-3, 5-2) dominated most opponents en route to a second-place finish in the conference, only suffering losses to No. 2 Maryland, No. 1 BC, and No. 6 Notre Dame during the regular season.

As expected of the No. 3 team in the country, it’s difficult to find a pronounced weakness for UNC. It excels everywhere on the field, but the Tar Heels arguably do their best work in their own half. Led by two All-ACC defenders in Charlotte Sofield and Emma Trenchard, as well as first team All-ACC goaltender Taylor Moreno—who boasts a .542 save percentage—UNC allows just 8.58 goals per game, fewest in the conference. The Tar Heels have held their opponent below the double-digit scoring threshold in 12 of 17 games in 2018, utilizing excellent on-ball defense to often suffocate opponent movement. UNC doesn’t force many turnovers—its season total of 124 is the fewest in the ACC—but really doesn’t need to with a lights-out netminder like Moreno.

It also helps that the Tar Heels are exceptionally good once they gain possession. They’ve been effective clearing the ball, succeeding on nearly 91 percent of attempts—which again tops the conference—and commit just 11 turnovers per contest. Sofield and Trenchard help in that regard, as does second-team All-ACC midfielder Gianna Bowe, who has turned the ball over just 14 times the entire season.

It’s clear that BC can’t cede the possession advantage to UNC and thus will have to rely on its dominance in the draw circle. The Tar Heels have won 56.6 percent of draw controls this season, meaning that the Eagles—who were successful on a whopping 65 percent of opportunities in 2019—should have an edge on faceoffs. Should BC gain possession on the majority of draw controls Sunday, it should be in good shape to offset the Tar Heels’ proficiency in possession.

In the offensive half, North Carolina boasts a pair of stars in Jaime Ortega and Katie Hoeg. The duo combined to average 10.71 points per contest this season, helping the Tar Heels average 15.35 goals per game, second to only the Eagles and their prolific attack in conference. In contrast to BC—which boasts five players that have reached the 30-goal mark this season—however, Ortega and freshman Tayler Warehime are the only two UNC players with at least 30 scores. That showed when the two teams met in the regular season. Ortega recorded three goals and assist, but the Eagles shut down her teammates, holding the Tar Heels to eight total goals on their way to a 14-8 victory.

The teams last met in March down in Chapel Hill. Ortega got the scoring started, but BC responded with five consecutive goals. Sam Apuzzo ripped twine twice to cap the run, and the Eagles were never seriously challenged after that. Another 4-0 scoring run that started at the end of the first period and continued into the second put BC up, 11-5, and the two foes traded goals from there on out. Kenzie Kent wrapped up the scoring with a minute left in the 14-8 win. Apuzzo was particularly effective both around the goal and in the draw circle for the Eagles. The reigning Tewaaraton Award winner scored five times and won eight draw controls. As a team, UNC won just nine.

BC has the same opportunity it did last season in this very matchup: a chance to extend its unbeaten streak to 20 games to begin the year, as well as win the ACC Tournament for the first time in program history. What’s more, the Eagles have an edge they didn’t have last season: home field advantage. BC has played four straight games in Alumni Stadium and won all of them, showing the talent it boasts translates seamlessly to the bigger field and stage.

This team is arguably more talented and deeper than the 2018 version of the Eagles that fell short against the Tar Heels, and should be favored to win, but also certainly shouldn’t discount UNC. The Tar Heels have tons of ACC Championship experience, and, as last season showed, are more than capable of knocking off BC. If the Eagles are to win, it will likely be because they win the majority of draw controls, keeping the ball in the hands of Apuzzo and Co. as much as possible while playing the same style of defense that helped them beat UNC in March. Allow the Tar Heels to suffocate the clock and run out to a lead, though, and BC could be staring at its first loss of 2019.