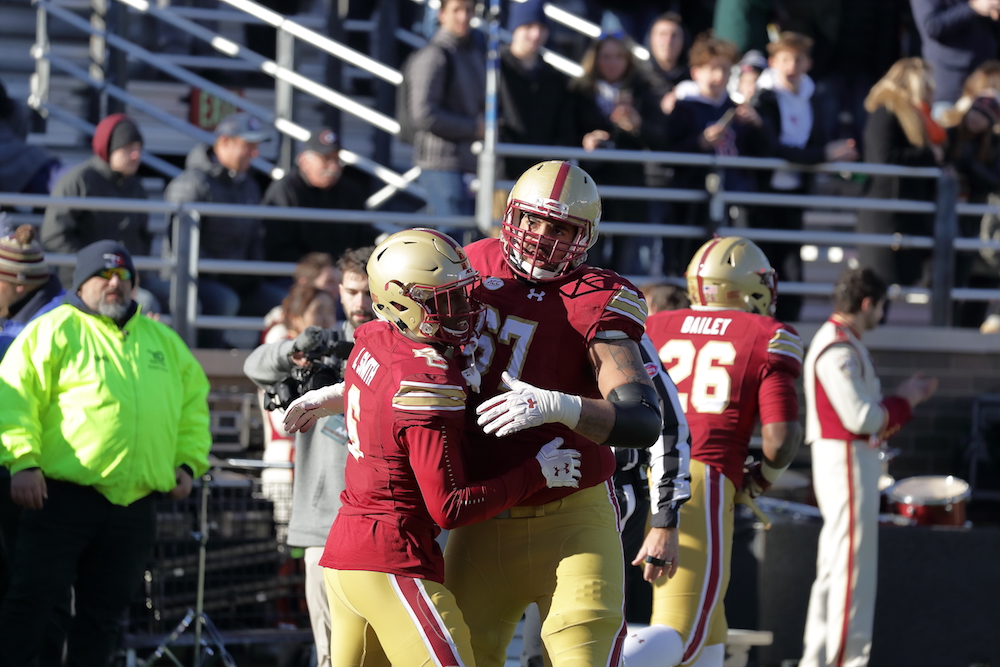 When Boston College football tight end Tommy Sweeney was selected in the seventh round of the 2019 NFL Draft, he marked the fourth Eagles’ player to come off the board—tying a school record for the number of selections in a given year since the league adopted its seven-round model (1994-present). While Sweeney was the last selection for BC, he was far from the last player to sign with a NFL team. When the dust had settled after the post-draft frenzy, nine Eagles—according to reports—had signed as undrafted free agents.

Ray signed with the Cleveland Browns after surprisingly sliding out of the draft. Overshadowed by third-round counterpart Zach Allen on the defensive line, Ray was pegged by many as a sixth or seventh round pick after racking up nine sacks and 11.5 tackles for loss as a senior. He’ll likely try to catch on with the Browns’ special teams unit, as analysts raised questions regarding his strength at the point of attack but still saw ability as a developmental pass rusher.

Walker, an All-ACC Second Team honor, enjoyed a distinguished four-year career with the Eagles as a kick and punt return specialist and signed with the Jacksonville Jaguars. It’s a homecoming of sorts for Walker, who hails from Naples, Fla. In 2018, Walker piled up a career high 1,080 kickoff return yards while also besting his junior year mark for average punt return yardage (13.7). While also taking snaps as a wide receiver, Walker finished with 130.8 all-purpose yards per game, an impressive number.

He’ll be joined by a familiar face in Jacksonville, as Strachan signed with the Jaguars as well. Strachan bounced back from a 2017 season that was cut short due to knee surgery with a strong graduate campaign. The 6-foot, 230-pound linebacker returned to the middle of the BC defense and worked his way on to the All-ACC Third Team, finishing with 91 tackles, eight for loss, and three sacks.

Another team that will have a pair of Eagles competing for a roster spot is the Tennessee Titans, who are no strangers to players from Chestnut Hill. The Titans are coached by Mike Vrabel—whose son, Tyler, plays at BC—and took Harold Landry in the second round last season. This year, they scooped up the likes of defensive backs Hamp Cheevers and Taj-Amir Torres after the draft concluded.

Cheevers is a signing that drew praise from assorted media, as he saw his stock rise during the college season. The junior slot corner earned All-ACC First Team honors after piling up 39 tackles and seven interceptions. He decided to leave campus early but didn’t make much buzz throughout the draft process and was pegged by many as a priority free agent.

He’ll be joined by Torres, a teammate in his positional group. The senior showed strength in rallying to the ball in 2018, pegged by Pro Football Focus as the conference’s leader in coverage stops with 16. He had 52 tackles, three interceptions, and a career-high 14 passes defended.

The third and final member of the secondary, Denis, signed with the Tampa Bay Buccaneers.

Like Cheevers and Torres, Denis drew criticism for his size. He also saw his numbers take a step back as a senior, going from 83 tackles and seven interceptions in 2018 to 49 tackles and one interception this past fall. Denis earned high marks as a smooth and athletic safety, but he slipped after running a 4.64 40-yard dash that ranked outside the top-15 at his position.

After Chris Lindstrom went 14th overall, his offensive line counterpart in Monteiro eventually signed with the Miami Dolphins. A 6-foot-7, 320-pound left tackle out of Brockton, Mass., Monteiro earned All-ACC Third Team honors in 2018 and made 32 straight starts at his position.

Ray Smith was reunited with his former position coach, as the Detroit Lions and Paul Pasqualoni signed the defensive tackle. Smith was an All-ACC Third Team selection in the fall after piling up 50 tackles, four for loss, as a standout in controlling the line of scrimmage. He impressed at the BC Pro Day with his athleticism but his size—the senior stands 6-foot-1, 302 pounds—means that he likely won’t play as a nose tackle when he arrives at the Lions’ training camp.
Finally, Jeff Smith—who made plenty of noise in the pre-draft process after running a blistering 4.34 hand-timed 40-yard dash at the Eagles’ Pro Day—signed with the New York Jets. Pegged by NFL.com as having a “better than average chance at making a NFL roster,” Smith will likely try to make his living as a special teams contributor, as scouts raised plenty of questions about his pass-catching ability.