Home » Sweeney Selected in Seventh Round by Buffalo Bills 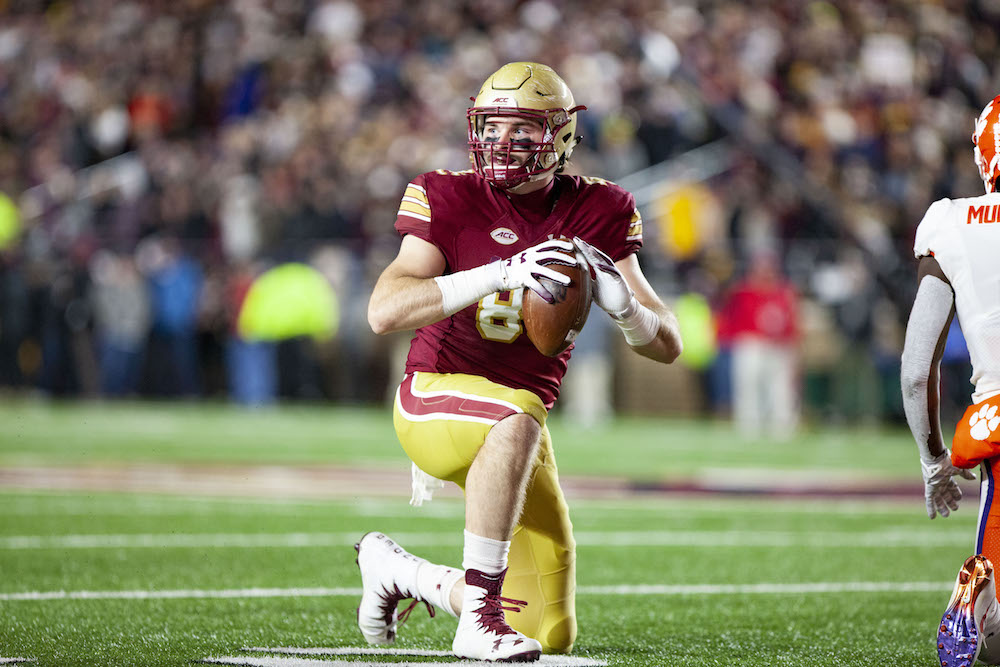 Sweeney Selected in Seventh Round by Buffalo Bills

Four Boston College football prospects were expected to go in the final four rounds of the 2019 NFL Draft. But only one heard his name called on Day Three: Tommy Sweeney. The tight end was selected by the Buffalo Bills with the 228th overall pick in the seventh round.

Sweeney is the first BC tight end to be drafted since Sean Ryan was selected by the Dallas Cowboys in the fifth round of the 2004 NFL Draft. He was also the fourth Eagle to be picked in this year’s draft, tying the school record for most draft selections in a single season since the current seven-round model was adopted (1994-present)—the mark was also reached in 1995 and 2014.

“Tommy is a tight end who can play anywhere on the field,” BC head coach Steve Addazio told BCEagles.com. “He can split out and catch the ball like a wide receiver, he runs great routes, he can attack and block. He is tough, durable, and an every down player. He will be a great pro with the Buffalo Bills.”

During his four-year career with the Eagles, Sweeney racked up 99 receptions, 1,281 yards, and 10 touchdowns, all while making 47 straight starts at tight end. He ranks fifth in BC history in receptions and receiving yards at the position. After redshirting his freshman year, Sweeney earned some time the following season, but really established himself as the Eagles’ primary tight end as a redshirt sophomore. The 2016 season was the first of three consecutive years in which the Ramsey, N.J., native recorded at least 340 receiving yards and three touchdowns.

Sweeney was an All-ACC Third Team selection in 2017 after posting a 512-yard, four-touchdown redshirt junior campaign, punctuated by a seven-catch, 137-yard performance in the New Era Pinstripe Bowl. This season, Sweeney hauled in 32 receptions for 348 yards and a trio of touchdowns, earning a spot on the All-ACC First Team and becoming a John Mackey Award semifinalist list along the way. To cap it all off, he shared the William J. Flynn Award—given to BC’s most valuable player—with safety Will Harris.

In January, Sweeney was one of four Eagles to participate in the Senior Bowl. He was targeted three times but only logged one reception, due to a drop and a Louisiana Tech Jaylon Ferguson pass rush. Nevertheless, he showcased that he could hold his own in the trenches, blocking alongside teammate Chris Lindstrom for much of the game and paving the way for a Dexter Williams four-yard rushing touchdown.

Sweeney’s measurables won’t jump at you on paper, as evidenced by his NFL Combine. After all, the 6-foot-4, 251-pound tight end ran a 4.83 40-yard dash—the 13th-best time among 2019 Combine participating tight ends. But Sweeney demonstrated his NFL-ready skill set during the on-field workouts. Not only did he put his soft hands on display in the gauntlet drill, but he also proved his ability to lift his hips into blocks, somewhat of a necessity for dual-purpose tight ends in today’s league.

Coming into the weekend, ESPN NFL Draft analyst Mel Kiper Jr. ranked Sweeney as his 12th-best tight end in this year’s draft. Meanwhile, Kiper Jr.’s counterpart, Todd McShay, rated Sweeney the 151st-best prospect in the entire draft. Even so, the tight end slid into the seventh round to Buffalo. He’ll be reunited with former teammate and current Bills linebacker Matt Milano. Sweeney will be competing with Buffalo tight ends Tyler Kroft, Jason Croom, and Dawson Knox—the Bills’ third-round selection—for snaps, and maybe even a roster spot.

Despite falling to the seventh round, Sweeney still managed to accomplish a feat that no BC tight end had in the past decade and a half—now, he’ll have to prove why he belongs in Buffalo. 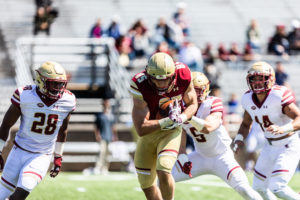