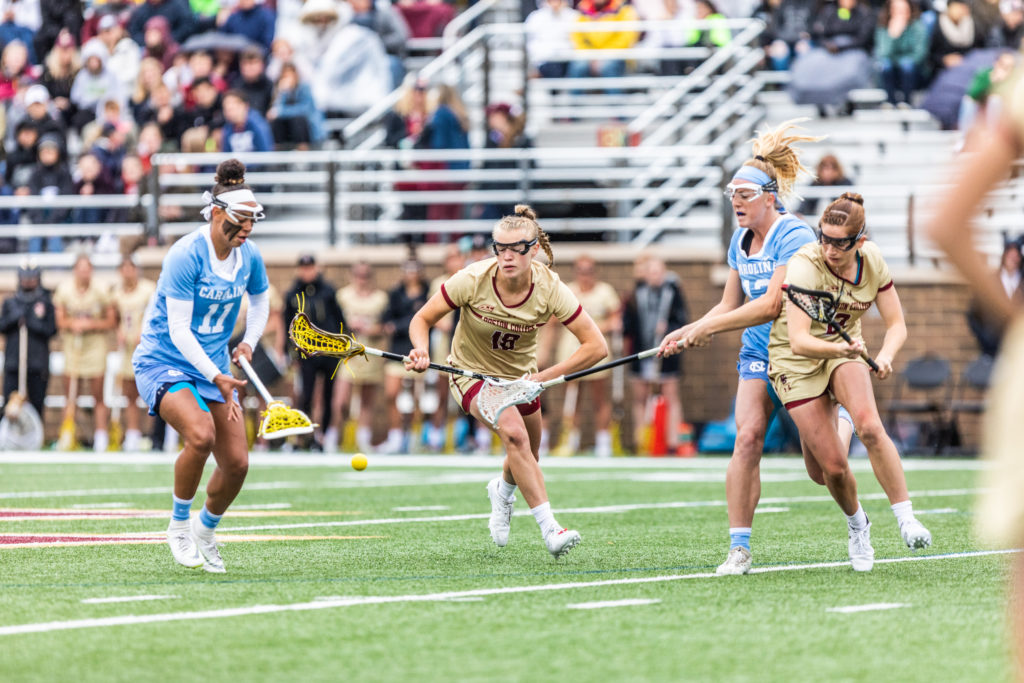 Last year, Boston College lacrosse saw its perfect season spoiled in the ACC Championship against North Carolina. Up to that point, the Eagles were a perfect 19-0 before falling to the Tar Heels, 14-11. This season, the Eagles followed an almost identical trajectory. After—for the most part—steamrolling its competition, No. 1 BC was once again pitted against No. 3 UNC in the title game, a prime opportunity to avenge its loss from a year prior. Unfortunately for the Eagles, they suffered a similar fate on Sunday.

BC saw an early 5-0 lead disappear, as the Tar Heels stymied the Eagles on offense while simultaneously cracking their formation on defense. When it was all said and done, UNC edged out BC, 15-13.

The Eagles (19-1, 7-0 Atlantic Coast) could not have started any better. Star senior Sam Apuzzo gave BC an early advantage with two quick goals in the first couple minutes of regulation. Cara Urbank then took over, as she notched two scores of her own to further extend BC’s lead. And then Taylor Walker—who scored the game-winning goal against Syracuse to cap off an incredible comeback—found the back of the net as well.

After the Eagles’ initial five-goal outburst, UNC (15-3, 5-2) finally tallied a goal, as Olivia Ferrucci beat sophomore netminder Abbey Ngai. Shortly after, though, Sheila Reitano drew a foul from Kayla Wood and scored on the free position shot. Through the first nine minutes, BC was dominating every facet of the game, as it raced out to a 6-1 lead.

But the Tar Heels found their mojo. UNC goaltender Taylor Moreno was switched out for Elise Hennessey. Over the course of the next 12 minutes, the Eagles were held scoreless while the Tar Heels developed an offensive rhythm. UNC tallied five straight goals from five different players to the knot the game at six apiece.

“I think we really lost the game in that second stretch when [the Tar Heels] scored [five] straight,” head coach Acacia Walker-Weinstein said after the game. “That was the period we are probably going to tackle as coaches. I think the girls will be spend a lot of time thinking about that stretch of time.

“I think if I had slowed down the ball a little bit more and maybe called some offensive plays a little bit differently, we could have held onto the ball to maintain the momentum.”

BC did end the half on a positive note. Freshman Jordan Lappin ended the drought by whipping a shot past Hennessey. A couple minutes later, Kenzie Kent displayed her game-changing ability, scoring two unassisted goals in the span of a single minute. The Tar Heels ended the half with a goal by Scottie Rose Growney, cutting BC’s lead back down to two.

To begin the second half, Taylor Warehime, Kara Klages, and Katie Hoeg each scored, allowing UNC to take its first lead of the game. Though the rest of the contest would prove to be a back-and-forth affair, the Eagles never retook the lead.

BC tallied its first score of the second half, thanks to Dempsey Arsenault, who found the back of the net after an earlier shot by Kent went off the post. The Tar Heels and Eagles continued to trade goals. Just 30 seconds after Arsenault’s goal, Gianna Bowe responded with one of her own. Apuzzo, on a free-position shot, launched the ball toward Hennessey, who blocked it but accidentally bumped the ball back into her own goal, tying the game once more.

Following that, UNC broke the tie by notching three straight scores over a nine-minute span. During this period, Hennessey came up with several enormous saves to keep the Eagles’ offense at bay. With eight minutes left to play, BC trailed by three and needed a comeback similar to the one it had against the Orange on Friday if it wanted to come away with the ACC title. It appeared that Arsenault provided the initial spark, as she scored at the seven-minute mark. Jordan Lappin then scored on a free-position shot, cutting the Tar Heels’ edge to just one.

On the next possession, Apuzzo forced a turnover from Charlotte Sofield and gave the Eagles a chance to record the equalizer—but they couldn’t find the same magic. Apuzzo and Urbank combined to launch three quality shots, but none of them found the back of the net. UNC took over as a result of a shot clock violation, and Hoeg provided what ended up being the dagger. After a Tar Heels shot went wide, Hoeg approached from behind the net and ripped one past Lauren Daly, who had taken over for Ngai in the second half. That goal made it 15-13 in UNC’s favor with only two minutes remaining.

The Eagles lost the draw control on the next play, and the Tar Heels slowly whittled down the clock, as they secured the victory. This loss marked the second straight year, in which UNC had spoiled BC’s undefeated season, as well as the Tar Heels’ fourth straight ACC title.

“It’s not the end of the world,” Walker-Weinstein continued. “The season’s not over. It’s going to sting—it’s another agonizing loss that the program is going to have to fight through. But They’re resilient, we’ve got a really good group of leaders. I believe they’ll find a way to build off this. You win or you learn.”

Every loss is difficult, but this defeat is especially tough considering the striking similarities between this contest and last year’s ACC title game. With a 19-1 record in hand, BC awaits its seeding in the NCAA Tournament. While this loss is certainly a setback, the Eagles will still secure one of the top seeds in the NCAA Tournament. An ACC Championship would have been quite the accomplishment, but BC still has the same goal in mind—capturing a national championship after losing the title game each of the past two years.