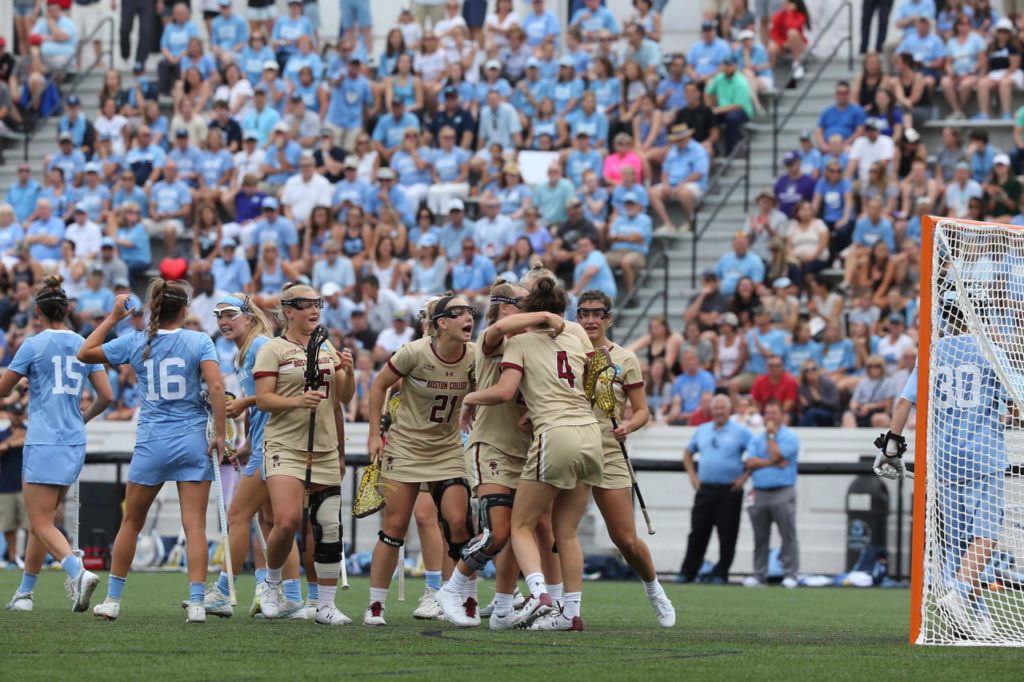 BALTIMORE — A month ago, Boston College lacrosse stormed out to a 5-0 lead against North Carolina in the ACC Championship, only to watch the Tar Heels chip away at their deficit, take the lead, and pull away in the second half to complete the comeback victory. For the second straight season, UNC had spoiled BC’s perfect season and robbed the Eagles of their first-ever conference tournament title—as well as the school’s first since 2007. But during Friday evening’s Final Four matchup, BC got revenge in perhaps its purest form.

With 16 minutes remaining in the opening period, the second-seeded Eagles found themselves in a 6-0 hole without a save in their pocket and their season hanging on threads. Five minutes later, BC flipped the script of the ACC title game, ending the first half on a 5-1 run before stitching together three straight goals in the early portion of the second period to take their first lead of the game and give third-seeded UNC an unpleasant taste of its own medicine.

The Tar Heels fought back, jumpstarting what shortly transformed into a thrilling back-and-forth affair, but BC—which finished the game with more draw controls and shots on goal, as well as less turnovers than UNC—never truly pumped the brakes, even when Sam Apuzzo’s potential game-winner met the net of Tar Heels goalie Elise Hennessey, and the game transitioned to overtime. Led by Cara Urbank’s four goals and Sam Apuzzo’s double overtime strike, the Eagles hung on to cap a remarkable come-from-behind 15-14 victory, advancing to their third straight National Championship: a 2017 rematch against Maryland.

The last four times these programs met, the team with the more draw controls ended up on the right side of the box score, so when No. 2 UNC (17-4, 5-2 Atlantic Coast) won the first two bouts in the circle, it was only reasonable for Eagles (22-1, 7-0) fans to panic. Naturally, the Tar Heels cashed in, scoring the opening two goals of the Final Four in the first three and a half minutes of regulation. But even after BC recovered in the circle, it looked far from itself.

The Eagles’ first shot—a Dempsey Arsenault strike—was saved by UNC goalie Taylor Moreno. Shortly after that, Kenzie Kent was stuffed near the cage. Apuzzo? She didn’t even record her first shot until the 11:27 mark. Tar Heel defender Emma Trenchard successfully faceguarded the two-time ACC Attacker of the Year throughout the majority of the game, limiting the senior to just two goals. To put that in perspective, in each of the last four meetings between BC and UNC, Apuzzo notched at least a hat trick.

While the Tar Heels’ defense shut down the Eagles’ attack, Jamie Ortega was leading a furious UNC scoring surge. Ortega scored or assisted on three of the Tar Heels’ first six goals of the game, but she was met with a great deal of help from Ally Mastroianni, Olivia Ferrucci, Scottie Rose Growney, and Gianna Bowe. Together, the balanced Tar Heels offense—a unit that boasts eight players with 20-plus goals this season—stitched together a 6-0 run that had every BC fan at a packed Homewood Field scratching their heads.

As soon as Bowe used a hesitation move to blow by Jillian Reilly and beat Abbey Ngai for UNC’s sixth goal of the day, Walker-Weinstein made a switch that would change the complexion of the game. Out went Ngai, and in came Lauren Daly—BC’s senior goalkeeper that started all last season and, because of injury, lost her job to the sophomore Ngai midway through the 2019 campaign. From the moment, she trotted onto the field, Daly stood tall in net. Not only that, but, as a lefty, she made the UNC attackers rethink their offensive gameplan.

“It kind of threw us off for a second,” Ortega said. “We weren’t really faking our shots, she was kind of just having easy saves for us, and she knew where we were shooting—so that changed a lot.”

Daly recorded BC’s first save of the game two and a half minutes later and went on to log three more before the half’s end. The senior limited UNC to two goals the rest of the period, allowing her offense to make up lost ground. With defensive resistance and an increasing dominance in the circle, the Eagles began to work at their six-goal deficit.

At first, BC ended its scoring drought by merely exchanging goals with the Tar Heels. Kent, Apuzzo, and Arsenault—the Eagles’ “Big Three”—all got on the board, but UNC pushed back with a breakaway Growney goal and far post Kara Klages laser. It was BC’s fourth and perhaps most underrated scorer who turned the tide. Urbank forced a Brooklyn Neumen turnover, sprinted in front of the crease, pivoted hard—shaking Klages in the process—and found the back of the cage to jumpstart a 3-0 Eagles run that ended the period with the score at 8-6.

“She has a lot of pride in how she plays the game,” UNC head coach Jenny Levy said of Urbank after the game. “And she sees herself as a really important cog in their offense, and we can tell that. We didn’t do a very good job on her. But someone’s gotta score for them.”

With the Tar Heels zeroing in on Apuzzo, Kent, and Arsenault, Urbank made the most of an abundance of opportunities on the sport’s biggest stage. The junior recorded a game-high nine shots and three of the most important goals of the second frame. Once again, the midfielder sparked another Eagles run—this one a 4-0 stretch that answered a second-half opening Ortega goal and gave BC its first lead of the day.

Sheila Rietano tied the game at nine goals apiece, and 43 seconds later, Kate Taylor sped by Wood and squeezed a shot by Moreno, chasing the UNC keeper as a result. After the game, Levy said that she often switches Moreno out for Hennessey to shift momentum—and on Friday, that strategy worked again.

Over the course of the final 20 minutes of regulation, both teams traded blows in what quickly transformed into a shot-for-shot battle. Growney tied the game at 10 apiece, before Urbank tallied two consecutive goals to retake the lead and make it a two-score contest with about nine minutes to play. Just when it appeared as if the Eagles were going to pull away, UNC reeled them right back in.

Klages split Walsh and Reilly on her way to the net and finished for her second goal of the afternoon. Then, four minutes after that, Ortega shook Reilly, received a pass in front of the crease, and unleashed a shot past Daly. Twenty seconds later, Ferrucci bent around the net and fed Klages for the Tar Heels’ third straight goal.

Trailing, 13-12, Apuzzo started to come to life. The senior guided BC to back-to-back draw control victories, which set the stage for a game-tying Arsenault goal, in addition to a go-ahead Jordan Lappin scoring play. Yet Ortega, who clocked out with a game-high five goals, seemed to have an answer for everything—the sophomore logged her fifth goal of the game and 81st of the year with 1:04 left to tie the contest at 14-14.

Then, all eyes were back on Apuzzo. With under five ticks to go, the senior wrapped around the cage and muscled a shot on net, but Hennessey was all over it. Apuzzo fell to the ground and layed on her back, as the horn sounded and the game went to overtime.

In extra time, UNC very nearly booked its trip to the title game on multiple occasions. In the first of three sudden-death, three-minute overtime frames—two comprising each period—Ortega delivered a pass to a cutting Ferrucci, following an Elizabeth Miller foul. Ferrucci had all the room in the world for a 1-on-1 with Daly and could have gone anywhere on net, but chose to attack the heart of the cage, and Daly was there to make a backhanded stop. One frame later, Bowe juked by Miller and fired a nearpost shot that was inches away from ending the three-hour game. Instead, it ricocheted off the frame and fell harmlessly to the turf.

It was only fitting that Apuzzo—a player that’s totaled 21 game-winners in her career—would be the one to finish out the marathon-like thriller. A minute into the third and final overtime stanza—the first of double overtime—Apuzzo wrapped around the cage and tried to get Trenchard to bite on a head fake. That didn’t work, so she kept sprinting toward the heart of the 18-meter line before backpedaling, switching her stick to her left hand, and ultimately charging in for the biggest shot of her star-studded career.

The ball whizzed past Hennessey, and Apuzzo jumped up and down in the air, twirling in jubilation as her teammates swarmed her, celebrating an exhilarating victory. Against any team, the win would have been satisfying for the Eagles, but versus UNC—a program that, until two years ago, owned BC, the double overtime comeback was all the more significant.

“A few years ago, we got tired of losing to [UNC],” Walker-Weinstein said. “And these guys decided that it was a big part of the program to get over that hump and be able to beat UNC.”

Photos by John Quackenbos / BC Athletics