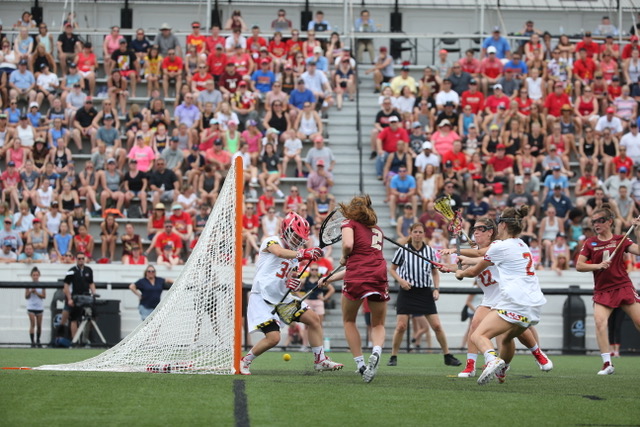 BALTIMORE — In Boston College lacrosse’s third consecutive appearance in the national final, the Eagles faced off against top overall seed Maryland—which ended BC’s Cinderella run through the NCAA Tournament in 2017 with a 16-13 victory over the Eagles in the National Championship.

BC certainly isn’t a Cinderella anymore—the Eagles haven’t lost a regular season game since that 2017 campaign, and have recorded a whopping 44 wins over the past two seasons, morphing into a college lacrosse power in the process—but, in the end, it didn’t matter, the result was the same. When the teams met in 2019, the Terrapins once again denied BC the ultimate prize. Maryland jumped out to an early lead and held off a late Eagles rally, claiming an NCAA-best 14th national championship with a 12-10 win and leaving BC once again searching for what more it could have done to claim the one thing the program is still missing despite its success: a trophy. Here are eight observations from the Eagles’ heartbreaking ending to the season.

1. Battle of the Goaltenders

Coming into Sunday’s contest, it was well known that Megan Taylor was probably the best goaltender in college lacrosse. And the Tewaaraton Award finalist proved it one more time in the final game of her college career. It began early in the first half, when Kenzie Kent—who slotted home five goals in a repeat of her heroic 2017 national championship—lost her defender and received a pass while cutting into the crease. It looked like a sure goal for the attacker, but Taylor somehow managed to get her stick to the ball, preventing a scoring play that would have tied the game at one. When the final whistle blew, the senior had amassed 10 saves, seven of which came in the first half, and frustrated the Eagles’ potent offense all afternoon long.

Impressively, though, Lauren Daly—who was rock-solid in relief of Abbey Ngai in the Final Four—nearly matched the four-time All Big 10 goaltender save for save. On the first possession of the game, she denied Caroline Steele with a low save, and seemed to build confidence after that. At the end of the first half, with the Terrapins in possession and looking to extend their lead to five, the senior recorded her fourth stop of the contest, stonewalling Erica Evans—who entered the game as Maryland’s leading goal scorer. Then, with the clock winding down, Daly gave BC one last hope for a comeback, blocking a top of the crease free-position attempt from Evans to give the Eagles the ball back with two and a half minutes remaining. When the final whistle sounded, the senior had eight saves, and was a huge part of a defensive effort that kept BC within striking distance all game long.

2. No Success in the Circle

The Terrapins entered the game one of the best teams in the country in possession of the ball. Coming into Sunday, they turned the ball over just 11.64 times per game, second-fewest in the country. It was clear that the Eagles could ill afford to lose the draw control battle and still beat Maryland. Unfortunately for BC, that’s exactly what happened. The Terrapins held a slim 12-11 edge at the end of the game and seemed to win draws at the moments when it mattered most. Early in the game, when Kent’s first goal of the day gave BC its only lead of the game, gaining possession back would have given the Eagles a chance to build on their lead and play from ahead. Instead, Lizzie Colson, who won a game-high seven draw controls, leaped to snare the ball and give Maryland possession back. A minute later, Steele scored while falling to her left, and the Terrapins never trailed again.

In the second half, after Kent gave BC momentum with the opening score of the period, Colson repeated the feat, winning the 50-50 ball and starting a possession that led to a Maryland goal. Any hopes of an early second half run that would get the Eagles back into the game vanished there. BC wouldn’t score for the next 11 minutes. The Terrapins would repeat the momentum-killing feat once more in the latter stages, snaring the draw control after Sam Apuzzo completed her hat trick with a laser into the top corner to cut the Eagles’ deficit to 11-8 and bleed two minutes off the clock before BC got the ball back.

3. Free Position not so Free

Against a fantastic goaltender like Taylor, scoring was difficult enough. But the Eagles didn’t take advantage of their free-position attempts either, something which made their comeback much more difficult. Entering Sunday, BC converted 46.7 percent of its free position shots, a figure that was good for the 16th best percentage in the country. Against Maryland, the Eagles were just 1-of-5, and didn’t convert until Kent’s shot from a central position with 3:50 to play. Much like in the circle, BC also couldn’t execute free-position attempts in crucial moments. An Apuzzo drive that would have narrowed the Eagles’ deficit to two midway through the second half flew wide, and Taylor also stopped the Tewaaraton Award finalist on another free-position attempt in the first half.

The past two times these teams have met in the NCAA Tournament, it’s been the Terrapins that were quicker out of the gate. In the 2017 National Championship, Maryland seized a 5-2 lead after 14 minutes, and in the 2018 Final Four, the Terrapins claimed a 6-2 advantage in that same time frame. Of course, in 2017, the Eagles never could quite fight all the way back and take the lead, while in the 2018 semifinal BC notably ripped off a 5-0 run to take the lead in the final 10 minutes of the first half. So when the Terrapins stormed out to a 8-3 edge, Eagles fans might have had some hope for a similar scoring outburst that got BC back into the game.

A stingy Maryland defense that swarmed the middle and caused the Eagles’ star attackers problems all game long with disciplined man marking largely squashed those hopes, though. BC never scored more than two goals unanswered, and wasn’t able to narrow the deficit to less than three goals until the waning moments.

The other thing that hindered the Eagles offensive rhythm? A plethora of fouls. Perhaps it was the hot temperatures, heavy legs from the double overtime semifinal against UNC, or just the speed and quickness of the top overall seed Terrapins, but BC was whistled 36 times Sunday, and was issued five yellow cards—one to Jillian Reilly, and two to both Christina Walsh and Cara Urbank. The number of infractions was inflated slightly by the ending, which saw the Eagles desperately trying to do whatever they could to get the ball back, but the reality was the amount of fouls made it difficult for BC to get into the flow of the game at all.

In fact, an offensive foul is really what ended the Eagles’ final comeback chance. After Daly’s final save gave the Eagles a chance to cut the Terrapins lead to 12-11 with 1:30 left (enough time for one final possession to tie the game), Kent received the ball behind the cage and drove toward the cage. Standing in her way, though, was Maryland defender Meghan Doherty, who set her feet and drew a charging call from the referees, giving the ball back to the Terrapins in the process. From there, BC didn’t see the ball again until there were just 13 seconds remaining.

Kent’s turnover in the waning moments wasn’t the only lost possession the Eagles will look back on with regret. Maryland’s 8-3 run to the begin the game didn’t come without chances for the Eagles to swing the momentum. After Steele’s impressive fall-away goal knotted the teams at two, BC was awarded the draw control, thanks to an infraction on Maryland’s Kali Hartshorn. On the following offensive possession, Taylor Walker jumped to receive a lob pass from Kenzie Kent, but was unable to keep her feet out of the crease and turned the ball over to the Terrapins. A minute later, Hartshorn atoned for her error with an unassisted tally that gave Maryland a lead it would never relinquish.

Five minutes later, after Daly blocked a Giles attempt and BC cleared successfully, Dempsey Arsenault tried to spin away from All Big Ten defender Shelby Mercer, but saw the ball fly out of her stick and into the possession of Terrapins midfielder Hannah Warther. It was a backbreaking giveaway for the Eagles, as Maryland scored to extend its edge to 5-2 just moments later. Much like in the Final Four contest against the Tar Heels, BC gave the ball away at decidedly inopportune moments. But, unlike Friday, the Eagles weren’t able to climb out of the hole those turnovers created.

The game was a showcase for four of 2019’s five Tewaaraton Award finalists, and while Megan Taylor certainly made her case for the award with her stellar performance, Giles, the Terrapins’ other candidate, was kept quiet for the majority of the game. Due in large part to the excellent face guarding of Dempsey Arsenault, Giles was shut out of the scoresheet until the final 14 minutes of the game, when she tallied twice. It was one last impressive reminder that Arsenault did more than just score for BC this season. In the final game of her illustrious Eagles career, the senior frustrated one of the most talented Maryland players for large parts of the game.

Arsenault wasn’t the only BC player who had an outstanding defensive game. Hannah Hyatt, who has been one of the Eagles’ face-guarding specialists all throughout her four years in Chestnut Hill, drew the task of denying Maryland’s leading point-scorer—Erica Evans—the ball throughout the game. It was a task Hyatt performed almost to perfection Sunday, as Evans was held to just one point—an assist on the Terrapins’ first goal of the game.

BC’s third straight loss in a National Championship doesn’t come with many bright sides, but it can also serve as a reminder that what the Eagles have done over the past three seasons is nearly impossible. BC has found a way to crack the elite tier of a sport that has historically been top-heavy. Since the year 2000, just six schools have won the women’s college lacrosse national championship, and 14 of those championships belong to two schools: Maryland and Northwestern. Appearing in the national championship, and competing with these traditional powerhouses, is nothing to scoff at, despite the Eagles coming up just short the past three seasons. BC will certainly have a very different team next season, but with head coach Acacia Walker-Weinstein at the helm, and more excellent recruiting classes sure to keep pouring in, Eagles fans still have reason to be optimistic about the future.