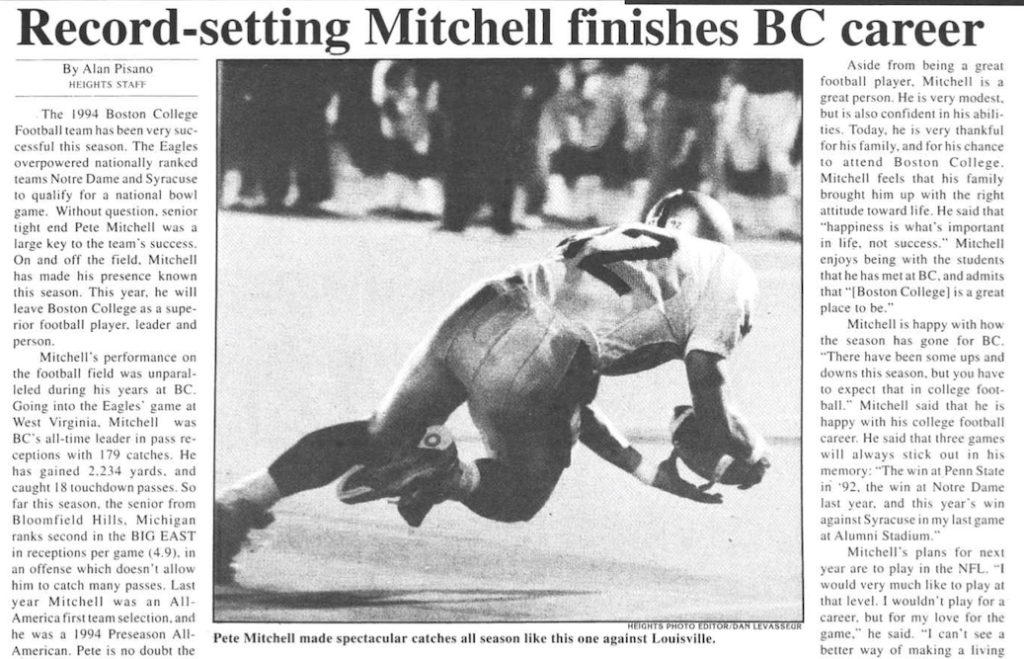 Boston College football just said goodbye to Tommy Sweeney—the Eagles’ first tight end selected in the NFL Draft since 2004—but, pretty soon, it’ll be welcoming back the program’s best player to ever play the position.

On Wednesday morning, Director of Athletics Martin Jarmond announced that BC will retire the jersey of two-time first-team All-American Pete Mitchell, BC ’94, on Nov. 9, when the Eagles host Florida State.

“We are thrilled to retire Pete’s jersey and congratulate him on this well-earned recognition,” Jarmond told BCEagles.com. “He will be remembered forever inside Alumni Stadium with some of the all-time greats to wear the maroon and gold.”

The 6-foot-2 tight end starred during the Tom Coughlin era. Each of his first three seasons, he improved in nearly every major statistical category. As a freshman, he hauled in 29 catches for 398 yards and a trio of touchdowns. The next year, he took a step in the right direction, recording 40 receptions, 555 receiving yards, and three touchdowns. But in 1993, Mitchell made a big jump, racking up 66 catches, 818 yards, and seven scores. BC went 9-3, was ranked as high as No. 11 in the AP Poll, and routed Virginia, 31-13, in the Blockbuster Bowl.

It was the following season, however, that earned Mitchell consensus All-American honors—an accolade that, to this day, only 12 Eagles have received. He tallied 55 catches, 617 receiving yards, and seven touchdowns in the amid head coach Dan Henning’s first year with the program. By the time Mitchell—a two-time All-Big East performer who led the conference in catches as a junior and a senior—rounded out his BC career, he was the school’s all-time leader in receptions (190) and receiving yards (2,388).

It wasn’t long before Mitchell reunited with Coughlin. In fact, in his first year as head coach of the Jacksonville Jaguars, Coughlin traded for Mitchell, who was originally picked in the fourth round of the 1995 NFL Draft by the Miami Dolphins. Mitchell played four years with the Jaguars, starting 40 games in the process. He eclipsed the 350-yard receiving mark each season, even logging 52 receptions and 575 receiving yards in 1996. He then went on to spend two years with the Giants, before taking a pitstop in Detroit and ultimately returning to Jacksonville to wrap up his eight-year NFL career with Coughlin and the Jaguars.

In terms of career stats, Mitchell still ranks extremely high in BC’s record books: He’s second in receptions, second in receiving touchdowns (20), and third in receiving yards. But, as far as Eagles tight ends go, he tops the leaderboard in all of those departments.

Mitchell might have an even more prestigious honor coming his way. He’s on this year’s ballot for induction into the College Football Hall of Fame, a distinguished club that only 10 other BC players have been invited to join.