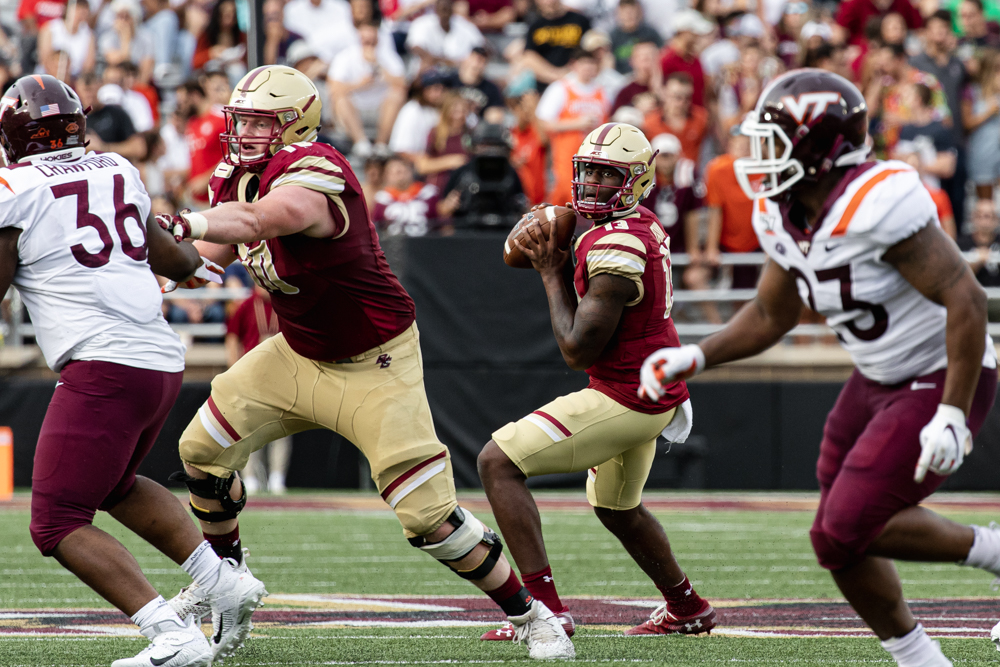 The Top-10 Plays From BC-Virginia Tech

Three 50-yard pass plays, 595 total yards, three turnovers, and six touchdowns—all in one half. It wasn’t always pretty, but Boston College football and Virginia Tech teamed up to put on quite the show during Saturday’s season opener. Here are the top-10 plays from the Eagles’ 35-28 victory over their Coastal Division rivals.

10. Kaleb Smith creates separation and stretches out for a late-game touchdown grab

Without wide receiver Damon Hazelton—the Hokies’ leading receiver from 2018—other Virginia Tech wideouts had to step up on Saturday, including redshirt freshman Kaleb Smith. He was more than up to the task, hauling in a few highlight-reel receptions, one of which kept the Hokies alive with a bit more than two minutes left to play. While Ryan Willis danced around the pocket, Smith broke away from Brandon Sebastian and laid out for a full-extension touchdown catch.

Saturday’s game meant a lot to Tanner Karafa, an Ashburn, Va., native who was recruited by Virginia Tech in high school and, in his fifth year, is finally the leader of the Eagles’ defensive line. The graduate student had himself a day: Three total tackles, two pass breakups, and one heck of an interception. In a one-score game, Karafa read Willis’ eyes on a screen pass, and dropped back to cover running back Deshawn McClease just in time for the one-handed pick.

8. Willis spins and hits Hezekiah Grimsley in stride for a 55-yard touchdown

BC’s secondary often bent but did not break over the course of the game, but there were times where the unit’s inexperience was on full display. With less than five minutes to go in the first quarter, Willis took the snap out of the shotgun, spun, and dropped a beautiful 55-yard touchdown pass into the arms of a wide-open Hezekiah Grimsley, who got behind both Tate Haynes and Nolan Borgersen for the easy score.

7. Zay Flowers beats his man on a go route and brings down first career touchdown

The Eagles’ first scoring drive of the season belonged to true freshman Zay Flowers. The speedy 5-foot-11 wide receiver ended the day with 116 all-purpose yards, and it all started with a 16-yard jet sweep around the edge. Then, four plays later, he sprinted by Hokies defensive back Jovonn Quillen and caught a 33-yard deep ball for his first career touchdown.

6. Haynes bursts through the gap on a cornerback blitz to strip Willis

Haynes might have been burned for a touchdown in the opening quarter, but it didn’t take him long to redeem himself. Halfway through the second frame, the redshirt sophomore shot through the gap on a cornerback blitz before stripping Willis. Defensive end Marcus Valdez was there for the fumble recovery, which led to an Eagles touchdown that gave BC the lead for good.

5. Sebastian elevates to pick off an underthrown Willis pass

Haynes’ partner-in-crime had his time to shine, too. Down by two touchdowns midway through the third quarter, Willis—who finished the game with a polarizing four touchdowns and three interceptions—took a shot for the end zone. The problem was, he underthrew Phil Patterson. With Borgersen in safety coverage, Sebastian played the ball, elevating for the pick and withstanding a hard hit to come up with yet another Eagles turnover.

4. On 4th-and-7, Willis extends arm past the first-down marker to keep the Hokies alive

Willis may have had a roller coaster of an opener, but he put his body on the line each and every down. The veteran signal caller scrambled for a few first downs, none more important than a 4th-and-7 conversion late in the fourth quarter. Willis moved up in the pocket before tucking the rock, making a bee-line toward the sideline and extending his arm for the first down. At first, he was called short, but the play was reversed to set up an eventual Hokies touchdown.

3. Smith adjusts mid-route before laying out for diving 25-yard reception

At the start of the second quarter, Willis floated a pass to Smith on a post route. But the redshirt freshman had to adjust mid-route, turning his head and diving to get underneath the ball for a clean catch in between Haynes and safety Mike Palmer. It was a much better reception than it was a throw, nevertheless the 25-yard play moved the chains on a series that resulted in Virginia Tech’s only lead of the game.

2. Kobay White catches back shoulder fade and stays in bounds for six

No catch was more impressive than Kobay White’s 17-yard touchdown reception, though. Following Haynes’ strip sack, Brown dialed up a perfect back shoulder throw, placing the ball only where his receiver could get it. White not only snatched the pass, but also got his foot in bounds, scoring his first touchdown of 2019.

1. Brown dips out of the pocket and delivers a 56-yard bomb to White on the run

BC was 114th in the country last year on third down, converting a mere 33.9 percent of time. On Saturday, though, the Eagles had a 47.4 percent conversion rate (9-of-19). One play in particular comes to mind. Facing a 3rd-and-10 from BC’s 30-yard line, Brown surveyed the field before rolling to his right and delivering a 56-yard pass to White. The improvised throw was awfully reminiscent of Jameis Winston, offensive coordinator Mike Bajakian’s former gunslinger.