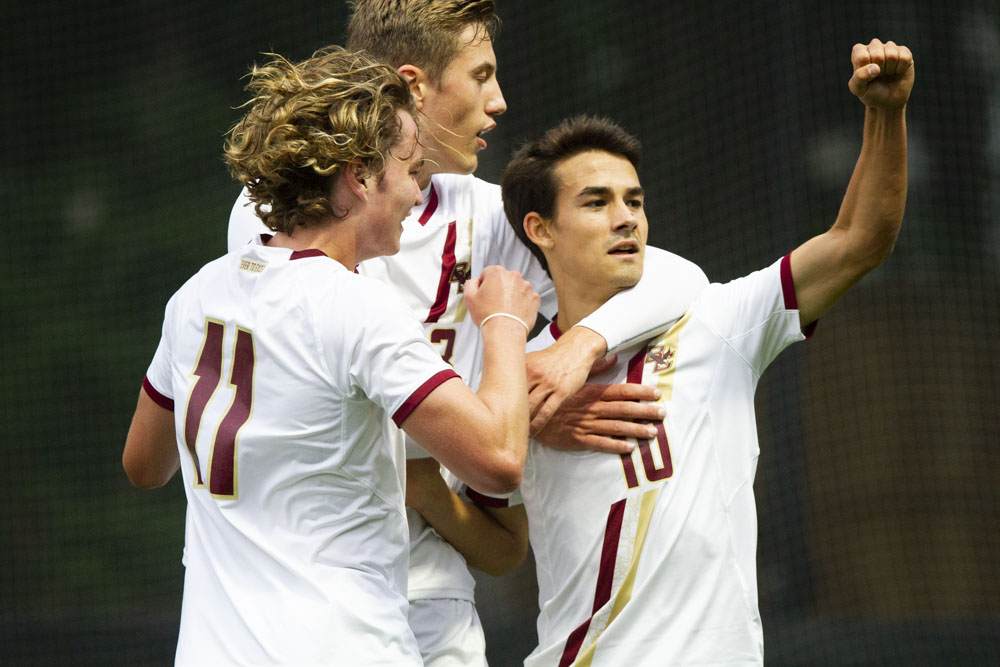 Fall Freshman Class Will Have Major Impact for Years to Come

For the most part, Boston College Athletics hasn’t enjoyed the best fall seasons the last few years. Football has been a consistent seven-win program that plays in a lower-tier bowl game, men’s soccer has slumped in the last two years, women’s soccer returned to the NCAA Tournament last season but immediately was upset, field hockey hasn’t been up to par in conference play, and volleyball hasn’t had a winning season since 2004.

And, after last season, you’d be remiss not to expect a setback of sorts in 2019. Every team suffered turnover, losing key pieces left and right. Men’s soccer graduated leading scorer Simon Enstrom, women’s soccer lost four-year starting goaltender Alexis Bryant and the ACC Midfielder of the Year in Sam Coffey, field hockey lost a loaded seven-player senior class, football had to rebuild a chunk of its defense and sent six players to the NFL, and volleyball graduated two players that felt the pain of winning single-digit games twice.

Take a look around, though, and you’ll see something much different. The good news for BC fans is that it seems like the Class of 2023 is stacked across the board. And, even more impressively, they haven’t skipped a beat since arriving on campus.

On Saturday, in football’s thorough 45-13 win over Richmond, the first touchdown was scored by true freshman wide receiver Zay Flowers, who took a handoff and jetted around the right side and ran 46 yards to the end zone. But that wasn’t even Flowers’ first score of the season—last week, he hauled in a deep touchdown pass against Virginia Tech. In two games, Flowers is second on the team in all-purpose yards (230) and figures to take on a bigger role in the offense as the game goes on.

The night before, men’s soccer was in action against a Rhode Island side that has posed a stiff test in years past. The Rams had won the meeting between the two teams in 2018 and held a 20-15-1 edge in the all-time series. Ed Kelly’s side battled its way to a 2-1 win, however, and the heavy burden was lifted by first-year players. Kelly started five freshmen, and two of them—Amos Shapiro-Thompson and Stefan Sigurdarson—were responsible for the scoring. Sigurdarson’s goal was the game-winner, an 86th minute strike that earned a spot at No. 3 in the SportsCenter Top 10 segment.

Not only the #GAMEWINNER but #SCTop10 for freshman Stefan Sigurdarson!#WeAreBC pic.twitter.com/tdFFzsb4RG

The Eagles are off to a 3-0 start, and freshman goalkeeper Giacomo Piccardo has had a big hand in that. He ranks second in the ACC in goals against average (0.33) and has two clean sheets in his first three outings. Offensively, three of BC’s five goals have come from the duo of Shapiro-Thompson and Sigurdarson, and it’s only a matter of time before lightning-fast forward Mike Suski (four shots) breaks down an opposing defense.

Staying in Newton, the women’s soccer team and first-year head coach Jason Lowe haven’t shied away from giving major minutes to first-year players. With a Coffey-sized hole in the midfield and the loss of Kayla Duran and Jenna Bike to season-ending injuries in preseason, Lowe has had to shuffle his lineup. The former Wake Forest assistant coach is trotting out five freshmen in his starting XI, and it’s produced an unbeaten start through six games.

The more than capable freshman class is anchored by Sam Smith, an attacking midfielder from Hanson, Mass., who has racked up five goals in six games—good for third in the ACC. Three of those scores have been the game-winning tally, too, as Smith has proven to be one of the more clutch players in the conference.

She’s joined by centre backs Sydney Moore and Michela Agresti, midfielder Sam Agresti (Michela’s twin), and goaltender Allie Augur. Moore has played all 540 minutes of the season thus far, and she and Michela Agresti have done an excellent job in locking down chances in front of Augur—who has two shutouts to her name and is the team’s No. 1 goalkeeper. Sam Agresti, a holding midfielder, has a goal and two assists to her name.

Across the parking lot, Kelly Doton and field hockey saw the departure of several seasoned contributors, including Ymke Rose Gote, Frederique Haverhals, and Brooke Matherson. So, Doton lined up a large recruiting class, welcoming in eight new players. Through four games, one is tied for the team lead in minutes played, one is second on the team in points, and three others have registered points. Margo Carlin is the name to know, as the freshman from Drexel Hill, Pa., has scored in three of her first four games on campus.

That’s not to forget volleyball, either. Second-year head coach Jason Kennedy’s first recruiting class featured Torey Baum, a 5-foot-8 libero from Orlando, Fla. Baum has seamlessly slotted into the rotation with the Eagles and is currently fifth in sets played (20) and third in service aces (18).

In summation, every fall team on campus has one if not several impact freshmen—an impressive total for one class. For programs like men’s and women’s soccer and field hockey, who are aiming to make more noise in the postseason than the last few years, it’s a tremendous boon and staves off any sense of a rebuild. For volleyball, Kennedy has a central player to build around when six seniors move along next spring. For football, head coach Steve Addazio has a weapon in Flowers that can be unleashed in tandem with a bruising running attack.

A more succinct summary: The future is bright.