Kansas covered the spread on Friday night—in the opposite direction. Coming off a 12-7 loss to Coastal Carolina, the 21-point underdog Jayhawks came into Alumni Stadium, erased a 10-point first-quarter deficit, and handed Boston College an embarrassing 48-24 defeat, snapping one of the more startling streaks in college football.

The victory marked the first time since 2008 that Kansas—a program that, as of 2015, had just 39 scholarship players and, in this decade, has posted a meager 20-91 record—knocked off a Power Five opponent on the road. While it was a sign of hope for Les Miles and the Jayhawks, it couldn’t have been a worse Friday the 13th for BC. The upset is easily is in the running with the Eagles’ 3-0 defeat to Wake Forest for the worst loss of Steve Addazio’s seven-year tenure.

In a game that featured 1,014 yards of total offense and 16 penalties, there’s a lot to unpack. But here’s the good, the bad, and the ugly—at least, as far as BC is concerned.

1) AJ Dillon picks up where he left off

Dillon was the star of BC’s Week 2 win over Richmond. He piled up 140 all-purpose yards, even recording two receptions for 54 yards and a score. The junior built on that performance against Kansas, especially in the first half. Dillon kickstarted the Eagles’ offense with 51 yards and a touchdown on their first drive. He carried the ball 22 times in the first two frames, picking up 128 yards in the process. But, in the second half, he only logged five rushing attempts.

On Kansas’ second play from scrimmage, Carter Stanley faked the handoff and completely overthrew Andrew Parchment. Luckily for BC, strong safety Mehdi El Attrach was in the right place at the right time. The graduate defensive back nabbed the second pick of his career, setting the stage for a 40-yard Aaron Boumerhi field goal. El Attrach’s interception gave BC six picks on the year, which heading into Saturday, was tied for the most in the nation with Arizona.

Oof. Not how Kansas wanted to start the night, as quarterback Carter Stanley airmails an pass and BC's Medhi El Attrach easily picks it off and sets the Eagles up in prime field position. pic.twitter.com/BFk8ibc05J

Entering Friday, BC ranked 29th nationally in third-down conversion. The Eagles were converting 50 percent of the time, a 16 percent increase from 2018, a season where they ranked 115th in that department. A quarter and a half into the game, BC had already faced nine third downs, largely because it was so run heavy on first and second. But the Eagles converted seven times, moving the chains at a rate that proved unsustainable (they finished 10-of-19 on third down).

4) BC runs an iteration of the “Philly Special” … again

Addazio has a knack for dialing up trick plays when his back is against the wall. After the Jayhawks scored their third consecutive touchdown—taking their first lead of the game—BC turned to a trick play nearly identical to the one that the Philadelphia Eagles ran in Super Bowl LII. The Eagles also rolled out a very similar gadget play against Temple last year. Once again, it worked like a charm, with C.J. Lewis finding a wide-open Anthony Brown for six.

BC runs the "Philly Special" again. This time…

BC ran this, fittingly, against Temple last year.

5) Travis Levy has himself a day in the return game

Carries have been hard to come by for Levy in 2019, but the scat back has had the chance to fill Michael Walker’s shoes in the return game. It’s a tall task, but the junior has shown some promise, especially on Friday night. Levy ran back seven kickoffs for a total of 189 yards, averaging 27 yards per return. And, near the start of the second half, he burst through the left side for 41 yards, tacking on a few extra yards after contact.

In Weeks 1 and 2, Addazio made a conscious effort to rotate Dillon and David Bailey. The 1-2 punch was effective and efficient. In fact, the duo combined for 302 yards on 65 carries (4.65 yards per rush) during that span. Against Kansas, though, Addazio seemingly abandoned that philosophy. Dillon logged 22 carries in the first half—one shy of his 2019 game high—and Bailey was left to watch on the sidelines, making the Eagles’ offense a bit more predictable. Dillon ended up with 27 rushes for 151 yards and a score. Bailey? Just seven carries and 25 yards.

2) Addazio passes on a 36-yard field goal, BC turns the ball over on downs

Over the course of his seven-year tenure, Addazio has been criticized for game mismanagement. Fans could have played that card again last night. Facing a 4th-and-4 from the Kanas 19-yard line in the second quarter, Addazio decided to go for it rather than kicking a 36-yard field goal, one that would have extended BC’s 17-14 lead to six and somewhat countered the Jayhawks’ previous score. Brown misfired, and the Eagles turned the ball over downs. Eleven plays and 81 yards later, Kansas had scored its third straight touchdown.

3) Where was Zay Flowers?

Following a 92-yard rushing performance last week, wide receiver Zay Flowers was absent from much of the Eagles’ offense. He caught one pass for 10 yards and ran the ball twice for nine more. Considering that BC was reeling in the second half, it’s hard to see why the true freshman—who can run the jet sweep and stretch the field in the passing game—wasn’t called upon, particularly since he was a spark plug each of the two previous weeks.

Taking a shot downfield for Flowers would have helped every single Eagle on the field, but none more than Kobay White. Brown targeted the redshirt junior wide receiver on 11 separate occasions—eight more times than any other BC player—resulting in just three receptions. It didn’t take long for the Jayhawks to key in on White, and Brown, who started just 1-of-6 and only ended up completing 18 of his 36 passes, didn’t adjust. The third-year starter looked like a freshman at times, staring down White and missing easy throws.

5) Once again, the Eagles’ defensive line can’t stop the run or rush the passer

Stanley played the best game of his career, but he also had loads of time in the pocket. For the third week in a row, BC’s new-look defensive line couldn’t get to the quarterback. Stanley wasn’t sacked once all game, leaving the Eagles with just three sacks through three games—to put that in perspective, Wyatt Ray had four all by himself in Week 3 last year. BC couldn’t slow down the Jayhawks’ run game either. Whether it was Pooka Williams Jr., Khalil Herbert, or Stanley, the Eagles had no answer in the trenches, giving up 329 yards on the ground.

In the postgame press conference, Addazio assured reporters that there was no lack of effort during practice this week. But he did concede that his players have to wrap up.

“That’s my responsibility to make sure that we tackle better than that,” he said. “I thought we tackled well in game one. I thought we had some mixed bag on game two, and I thought we missed a lot of tackles [tonight].”

Tackling was a problem for both teams in the first half, but the Eagles didn’t snap out of their defensive funk at halftime. All night, Kansas’ running backs made BC look silly, rushing right past the line of scrimmage before shedding a number of tackles. Eagles defenders dove for the legs of Williams Jr. and Herbert, took bad angles, and waited for the Jayhawks to come to them versus driving their hips to make the tackle. After Friday night, BC ranks 115th in rush defense—and second-to-last in the ACC—allowing 214 yards per game on the ground.

If there’s one play that encompasses BC’s loss, it’s Herbert’s 82-yard run at the very end of the first half. With just 40 seconds left in the second quarter and the ball on the Jayhawks’ 15-yard line, defensive coordinator Bill Sheridan called for a run blitz. Even so, Stanley pitched the ball to Herbert and the senior—who finished with 187 yards on a mere 11 carries—surged through the trenches practically untouched. What happened next had everyone confused.

Herbert navigated a sea of green in front of him as both BC safeties, El Attrach and Mike Palmer, ran toward their own end zone, still thinking it was a pass play. By the time they realized it, they were actually in a position to make the tackle, but El Attrach couldn’t wrap up and Palmer slipped. Herbert followed his blockers down the right sideline before being pushed out at the BC 3-yard line by Tate Haynes.

On the ensuing call, referee Cooper Castlbry referred to Kansas as “Kansas State.” Quite frankly, the brain fart was understandable after what had just occurred. Three plays later, Stanely found Andrew Parchment for six, retaking the lead for good.

Here’s what Addazio had to say about the play after the game:

“Backbreaker. Yup, no doubt,” Addazio said of Herbert’s lengthy run, in which the secondary seemed unaware at one point that he was running free. “We’re in man coverage, we had a run blitz on … Bizarro. I don’t know what happened on that run blitz.”

3) Aaron Boumerhi misses from 31 yards out

On a night when Nate Freese—who converted 20-of-20 field goal attempts as a senior in 2013—visited campus, it looked as if BC might finally have its answer to its five-year kicking problem when Aaron Boumerhi drilled a 40-yarder in the first quarter. Yet, when it mattered most, the Temple transfer let Addazio and the Eagles faithful down. Boumerhi missed a 31-yard field goal that would have made it a two-score game with 11:43 remaining in the game.

4) Nolan Borgersen gets dropped, hurdled over, and flagged

Last week, Nolan Borgersen had himself quite the interception, the first of his career. Richmond quarterback Joe Mancuso threw the ball into double coverage, and Borgersen elevated for the highlight-reel pick. Against Kansas, however, the free safety couldn’t seem to do anything right.

Midway through the second quarter, Stanley fired a pass to Kawmie Lassiter II, and the wide receiver used a juke move to drop Borgersen, who came up to make the tackle.

On the same drive, Stanley ran the read-option, faking a handoff before hurdling over a lunging Borgersen. The play made Stanley look fearless and Borgersen, well, ridiculous. To make matters worse, the graduate student was called for roughing the kicker on the Jayhawks’ first drive of the fourth quarter, gifting Kansas another first down and a chance to extend its streak of seven straight scoring possessions.

As bad as BC’s run defense was, its secondary’s performance wasn’t much better. For the most part, the Eagles’ defensive backs held their own during the first two weeks of play, but everything unraveled on Friday night. After Stanley airmailed an interception, the senior completed his next 11 passes, picking apart BC with quick passes. The Eagles were giving the Kansas wideouts too much room off the line, allowing Stanley to complete easy throws and let his receivers make people miss.

There were also a handful of breakdowns. On Kansas’ first touchdown of the game, tight end Jack Luavasa sliced by BC linebacker Paul Theobald, who bit on the play fake—following two Williams Jr.’s runs—and waltzed into the end zone for a wide-open score.

Then, early in the third quarter, Elijah Jones had his eyes in the flat while Parchment streaked past the cornerback to get open and haul in a 29-yard reception.

These were just two instances of a repeated theme from Friday night: missed assignments and mental gaffes in the secondary. Couple that with 329 Jayhawk rushing yards, and you have Kansas’ biggest offensive outing, in terms of total yards, since its Week 1 win over Rhode Island back in 2016. 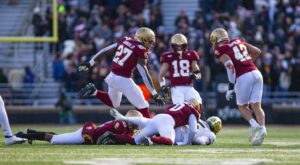