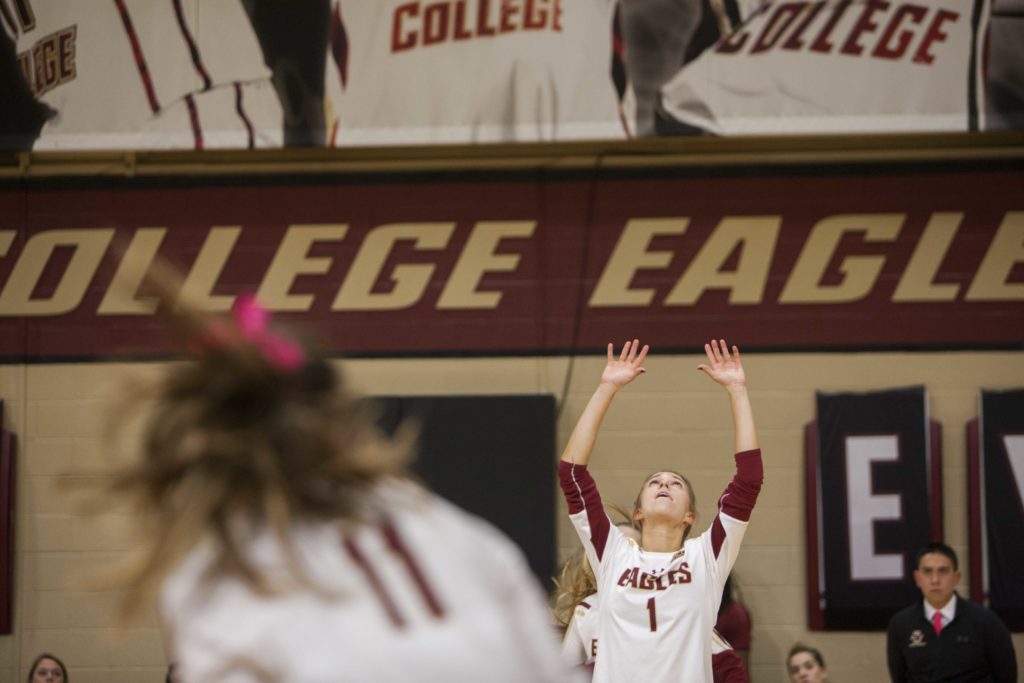 It was a tale of two weekends for Boston College volleyball to open the season. Beginning the year at the Oregon Classic, the Eagles came away victorious just once in three matches, with their two losses coming of the straight-set variety. The next weekend, head coach Jason Kennedy’s squad turned it around to sweep the UConn Challenge, looking focused and locked in for the entirety of the tournament.

This weekend, at the FAU Invitational, BC split the difference, taking two of three in Boca Raton, Fla. The Eagles swept Bethune-Cookman and Southern Utah but fell to hosts and eventual invitational champions Florida Atlantic in a four-set affair.

The weekend finale took place Saturday morning, pitting BC (6-3) against Southern Utah (5-4). The first set saw the Eagles jump out to an early 9-3 lead, built up thanks to two kills and a block from Amaka Chukwujekwu, whose 24 kills in the tournament earned the junior All-Tournament Honors, alongside teammate Jewel Strawberry. A balanced effort—six different players recorded a kill in the set—helped BC cruise to a 25-12 first set victory.

The Thunderbirds fired back early in the second set, opening a 6-4 lead, but the Eagles embarked on a five-point swing that brought the lead back to BC’s bench. Momentum went back and forth throughout the rest of the set, but the Eagles would clinch the set, 25-21, on a clutch combined block by Chukwujewku and Strawberry.

Playing off the two-set lead they had already mounted, the Eagles continued their strong effort with a 25-18 match-clinching third frame. Senior right-side hitter Cat Balido notched six kills in the set alone, and she also paced the Eagles with 12 putaways in the match.

The Eagles’ sole setback of the invitational occured on Friday night, a hotly contested battle against FAU (6-2). The match lasted four sets, each of which featured no more than a four-point margin of victory.

Strawberry was on fire early, killing four of the first eight points of the set, seven of which the Eagles won. FAU fought back, winning three straight points to cut the Eagles’ lead to 23-21, but two more timely kills by Strawberry would secure the set for Kennedy’s crew.

The second set swung back and forth again, taking the sides to a 20-20 stalemate. With every point magnified, a pair of errors by Sophie West and Madison McKnight—her only miscue in a match where the setter tallied 30 assists—gave the Owls all the room they needed to take the set, 25-23.

The third frame was just about deja vu for Kennedy’s side, with both teams fighting for every point, staking them to a 20-all tie. BC gained a 22-21 edge with kills from Strawberry, one of her game-high 20, and Clare Naughton. The Owls won the next four points, however, with putaways by Sydney Nemtuda and Jordan Yauch, followed by a pair of BC errors that ended a heartbreaking set, 25-22.

BC fans could feel the match slipping away in the fourth set, when the Owls came within a few points of victory, leading, 19-14. But the Eagles weren’t done yet, as four more Strawberry kills rallied the Eagles to an 8-0 run and a three-point advantage. Then it was the Owls’ turn to counter, though, and make a run of their own. Back-to-back kills by Massiel Matos, proceeded by two more BC errors, gave FAU the lead back. Neither side would fold, and a 25-25 tie ensued, but FAU took two critical points with another kill by Matos and another costly Eagles error to polish off the nail-biter with a win.

BC’s opening match of the weekend saw it pick up where it left off in Connecticut. Bethune-Cookman (2-6) went down in straight sets, but the Wildcats fought hard to stay in sets and make things difficult for BC.

In the first set, the teams went back and forth early, but 14 kills at a 31 percent clip proved to overmatch the Wildcats and help the Eagles take it, 25-17. Balido had five putaways in the frame to pace BC’s attack.

The closest frame of the match came next. Bethune-Cookman capitalized on seven BC errors to bring the set down to the wire. However, nine Wildcats miscues allowed the Eagles to emerge victorious in a close 25-20 affair.

It was a different story in the third set, as BC was dominant out of the gates. Three kills from freshman Izzy Clavenna helped the Eagles storm out to a 10-1 advantage. A 55 percent hitting percentage helped the Eagles cruise to a 25-12 rout of the Wildcats and their first win of the weekend.

Kennedy’s squad will take on crosstown rival Harvard on Wednesday in a midweek tilt before its final weekend tournament at Rhode Island next weekend. This is the chunk of the schedule where BC needs to fine-tune its game, as the Eagles are about to face the up-and-down perils of conference play. With just four games between the start of ACC play, Kennedy and BC will need to cut down on errors and see further development from its young core to avoid similar rough patches as last year.