The 2019 Boston College Fall Career and Internship Fair drew over 2,000 students and 152 companies to Conte Forum on Thursday, according to Associate Vice President for Career Services Joe Du Pont.

“They love the strength of the curriculum,” said Du Pont. “And there’s a lot of great social networking [and] liberal arts skills that are really important in a work environment.”

Du Pont emphasized that the Career Fair is for all BC students regardless of their school or major. Compared to schools with less of a focus on the liberal arts, an education from BC equips students with a more diverse set of abilities, Du Pont said.

In his experience, he has noticed employers place a high premium on “soft skills” such as good communication, teamwork, and leadership. He also mentioned the importance of being results-focused, working with integrity, and thinking critically.

“Employers hire by competency, not by coursework,” Du Pont said. “Regardless of what your major is, recruiters are very attuned to the skills that liberal arts students bring. I think sometimes BC students take for granted how qualified they are.”

Many of the employers at the fair echoed Du Pont’s point about the desirability and potential of BC students.

“We are looking for coachable, competitive, and driven people for our internship program,” said Jared Brillo, a representative from financial services company Northwestern Mutual. And I think Boston College has a lot of those. It definitely comes down to who they are as a person and how they are when they’re interacting with other people.”

The qualities employers are looking for in potential applicants extend beyond one’s GPA, Du Pont said. Companies look to BC students for the skills needed to be successful in any business environment.

“[We are] looking for someone with an attention to detail, someone who wants to hit the ground running,” said Dionne Higginbottom, a representative from the financial group Mizuho. “So someone who’s not afraid to ask questions, who’s not afraid to put in that extra work. Come in early, leave late getting the job done. And we’ve seen a lot of that today.”

At the fair, multiple students commented that their initial apprehension melted away upon actually speaking with the employers.

“Once you get into your personal interactions, it’s not overwhelming. It’s just that the whole environment looks a little bit intimidating from afar, but it’s not so bad once you get in there,” said Emma Dawson, MCAS ’22.

Students also said that they appreciated the fact that many of the company representatives at the Career and Internship Fair were BC alumni.

“I was able to draw connections with some of the people that graduated in the past few years, that know some of my friends,” said Luke Welch, CSOM ’23. “We talked about professors that they had and where they lived, and it was just a funny perspective as someone who has graduated in the workforce now.”

Welch also voiced appreciation for the efficient and organized layout of this year’s fair.

“I thought it was very logical in the sense that some of the companies were grouped together based off of whether it is a government agency or if it’s a business, like a consulting finance firm,” he said. “It was easy to walk around. I did not have to really bump into people, so I thought the layout was very effective.”

Many of the employers who attended also took notice of the Career Center’s attention to detail.

“I think everything was extremely organized from the moment I walked in this morning,” Higginbottom said. “There’s a great mix of companies in the room, and I like that it’s a good mix of bigger brands [and] smaller brands, and not everyone is from the same industry, so it doesn’t feel as competitive. From a company perspective, it’s everything we could have asked for today.”

In anticipation for the fair this year, the Career Center also unveiled several new resources for job-seeking students, including Career Clusters, which pairs students with an advisor based on career rather than school, and Career Closet, which provides business attire to students who may not be able to afford the clothing necessary to network or interview for a professional job.

Eagle Exchange—an initiative rolled out by the Career Center on Sept. 3—is an online platform that connects current BC students with BC alumni. Du Pont said that by Sept. 7, over 2,000 students had signed up. This platform allows students to build their network by industry, video-chat with alumni, and have their resume looked at by someone with more professional experience.

The Career Center zeroed in on student concerns at their “prepare for the fair” session, in which they hoped to take BC students’ natural skills and talents and help them best present themselves to employers. This workshop—held a week before the Career and Internship Fair—helped students prepare their “elevator pitches” and gave them the ability to have meaningful conversations with the employers who came to BC.

Other sessions held ahead of the Fair covered careers in STEM, resume development, and career planning.

“I’m in the Designing Your Career class through the Career Center, so they gave me really helpful tips,” Dawson said. “I had a really good plan going into [the Career and Internship Fair].”

Du Pont discussed the CareerFairPlus app, which gave students all the information they needed to succeed at the Career and Internship Fair. It provided students with an interactive map that listed all of the employers present at the fair as well as background information about each company’s open positions. 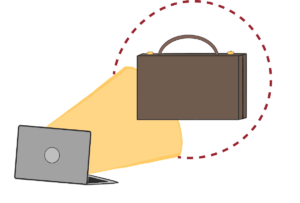 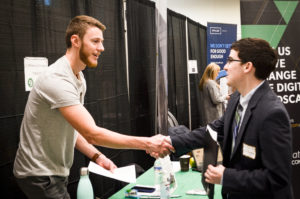