BC Blanked for Second Straight Game, Falls to Pittsburgh

After a disappointing shutout loss in its conference opener to North Carolina State, Boston College men’s soccer aimed to return to its high-flying offense that had been on display during an otherwise scorching hot start to the season. A home game against a traditionally weaker Pittsburgh side—who the Eagles had defeated in the teams’ last four meetings and owned a decisive 12-4-2 edge in the all-time series—offered a great opportunity to return to course.

Instead, the Panthers’ methodical offense controlled the pace for much of the game, limiting BC’s opportunities and allowing Pittsburgh to escape with a narrow 2-0 victory.

The game was a tale of two styles. The Eagles (4-2, 0-2 Atlantic Coast) came out of the gates looking to attack early and often, hoping to find the consistent offense that carried them to wins early in the season. The Panthers (3-3-1, 1-1-0), on the other hand, were content holding possession and probing the BC defense, an offensive philosophy that led to Pittsburgh dominating possession for much of the opening half.

Early in the first period, the Eagles’ defense looked strong in withstanding tests at the hands of the Panthers deliberate offense. Centerbacks Victor Souza and David Longo made numerous plays on the ball, which released pressure after long periods of Pittsburgh possession and forced the Panthers into taking longer shots easily corralled by keeper Giacomo Piccardo.

Despite this confident play on defense, BC’s offense never found a rhythm in the opening half. The Eagles looked eager to attack and apply pressure on Pittsburgh’s side of the field, but their attempts to poke holes in the Panthers back line were largely foiled by a sturdy Pittsburgh defensive unit. BC only managed one first-half shot on goal, which came on a header by Souza more than 20 minutes after the opening whistle.

After a long sequence of slow play, the Panthers got on the board with just over seven minutes left in the first half. After a foul led to a Pittsburgh free kick just over 20 yards from the net, Panthers freshman Velikjo Petkovic launched a strike just past the outstretched arm of Piccardo and into the far corner. Four minutes later, the Eagles had perhaps their best opportunity of the game when they received a free kick about five yards above the top of the box. However, the ensuing shot from Amos Shapiro-Thompson sailed over the crossbar, and BC went into the break trailing, 1-0.

In the second half, the Eagles were able to speed up the pace of play and force the Panthers out of their slow, comfortable offense. BC attacked hard and looked to be on the cusp of equalizing the game, but Pittsburgh was able to make big plays defensively when they needed to. The Eagles put a few shots on goal and had good opportunities off corners and set pieces, but all were turned away by the confident Panthers defense and junior goalkeeper Arie Ammann.

In the 86th minute, Pittsburgh striker Alexander Dexter—a late substitution—sealed the game for the Panthers when he beat Piccardo after a good pass left him open inside the box.

Friday’s game marks the second game in a row that the Eagles have been shut out, their first two blankings of the season after averaging two goals a game for the first four matches of the year, a stretch where they went 4-0. Creating scoring opportunities is certain to be a priority as the team prepares for Tuesday’s game against Massachusetts. The Minutemen will be a welcome relief from conference play, as they come to Newton having lost two games in a row.

Despite back-to-back scoreless showings, there’s reason to be optimistic about BC’s season going forward. The Eagles will play five of their next six games at home, giving them ample time to regroup and pick up key conference wins before heading on the road for the tail end of the season. Finding their offensive stride against a lesser non-conference opponent will be crucial. 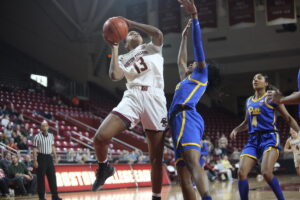