Home » ACC Power Rankings: and Then There Were Two 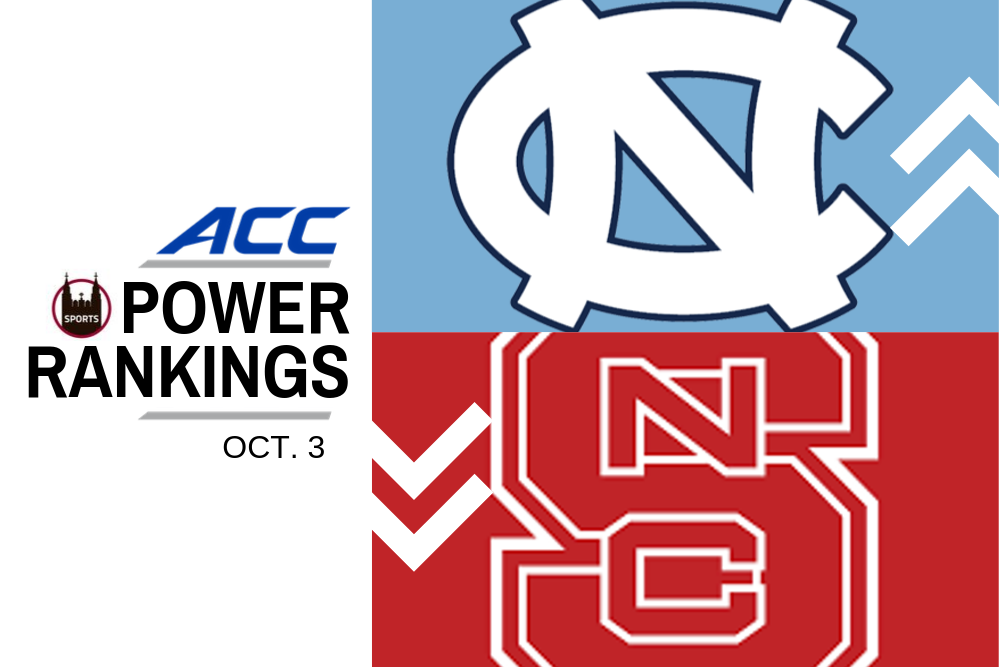 ACC Power Rankings: and Then There Were Two

Week 5 saw the ACC’s three remaining unbeaten teams face stiff road tests, with differing success. Clemson and Wake Forest barely survived all they could handle from North Carolina and Boston College, while Virginia remained competitive with Notre Dame, but finally succumbed to the Fighting Irish in South Bend, thanks to a rash of turnovers and sacks.

All in all, though, nothing that happened over the weekend really shook the notion that the conference goes as follows: The Tigers, the Demon Deacons and Cavaliers—two teams that could maybe give Clemson a run for its money—and a whole lot of chaos behind them. After all, as the cliche goes, a win is a win, and there’s something to be said for both Clemson and Wake Forest displaying resolve in the face of adversity, as well as UVA walking into one of the more iconic stadiums in college football and giving a top-10 team a good fight.

The Tigers haven’t looked like the team that barnstormed its way to a 15-0 season and a national championship in 2018. There are concerns along the defensive line, and Trevor Lawrence has already thrown five interceptions—one more than he threw all of last season—but they’re still 5-0 and indisputably the most talented team in the ACC. And with Wake Forest as  the only likely challenger to Clemson in the Atlantic, the Tigers still have to be considered favorites to reach the ACC Championship Game—despite having to stop a late two-point conversion against UNC to remain unbeaten.

The Tigers escaped the Tar Heels by the skin of their teeth, but the Demon Deacons’ win against the Eagles might have been even less likely. Wake Forest allowed 536 yards of total offense and had just a 15 percent win expectancy, according to ESPN’s SP+. Nevertheless, the Demon Deacons escaped, largely because they converted an astonishing 17-of-24 third downs, and BC botched a fourth-quarter field goal (more on that below).

Winning on the road against a top-10 team? Difficult. Winning on the road against a top-10 team when you commit five turnovers? Pretty much impossible, no matter how good you are. Despite a surprise onside kick to start the second half, the Cavaliers simply shot themselves in the foot against Notre Dame. Bryce Perkins completed 30-of-43 passes for 334 yards and two touchdowns, but also lost three fumbles—including one that was returned for a touchdown in the third quarter—and threw two interceptions, as UVA lost, 35-20, to the Irish to fall from the ranks of the unbeaten.

The Blue Devils certainly made a statement in Week 5, going into Lane Stadium and thrashing Virginia Tech, 45-10, behind three total touchdowns from Quentin Harris. Duke managed just five total yards of offense in the first quarter, but still took a 7-3 lead in the second quarter after a fortuitous fumble recovery and never looked back. With very winnable home games against Pittsburgh and Georgia Tech on the horizon before a road date with Virginia that could decide the always-unpredictable ACC Coastal, the Blue Devils are certainly in a good place after four games.

The Tar Heels may have come a two-point conversion short of pulling off a stunning upset of then-No.1 Clemson, but still outplayed the defending national champions for most of the day, holding them to season lows in points and total yards. Sam Howell showed impressive poise in leading a 16-play drive that gave UNC a chance to tie or win the game, and though the Tar Heels now have a losing record, Mack Brown’s rebuild is ahead of schedule.

With James Blackman still sidelined with a knee injury, Wisconsin graduate transfer Alex Hornibrook stepped up for the second straight week. Hornibrook threw for a career-high 316 yards and three touchdowns, helping the Seminoles beat North Carolina State, 31-13. FSU has drastic offensive line problems—it allowed eight sacks against the Wolfpack—but has a bye to come up with solutions and celebrate back-to-back wins in the ACC for the first time since November 2016.

The Eagles outplayed Wake Forest in many categories Saturday—third-down defense being the key exception—but still ended up on the wrong side of the scoreline thanks to some questionable game management. Anthony Brown threw an interception on 4th-and-3 from the Demon Deacons’ 21-yard line, while Steve Addazio took a delay-of-game penalty rather than calling a timeout on a 44-yard field goal attempt. The snap on the ensuing 49-yard attempt was botched, leaving three points on the board as BC lost, 27-24. The good news: AJ Dillon and Anthony Brown both had excellent days, the Eagles’ offense totaled 536 yards, and the defense looked like it took a step forward, especially against the run.

With starting quarterback Kenny Pickett out due to a shoulder injury and both of their starting running backs also sidelined, the Panthers nearly lost to FCS foe Delaware. Luckily for Pittsburgh, backup signal-caller Nick Patti led an eight-play, 90-yard touchdown drive in the fourth quarter, helping head coach Pat Narduzzi and Co. climb above .500 and notch their second straight win. A road contest against Duke looms for the Panthers, who understandably looked nothing like the team that beat No. 18 Central Florida two weeks ago.

The Orange wasn’t tested in the slightest against Holy Cross, holding the Crusaders to 138 total yards in a 41-3 blowout win. The schedule certainly gets more difficult from here on out, and the status of starting quarterback Tommy DeVito—who left the game with an injury in the fourth quarter—will be of interest to Syracuse fans over the bye week, but the Orange should also get back All-American free safety Andre Cisco ahead of a Thursday contest next week against reeling N.C. State.

The Wolfpack defense, and in particular Darrell Murchison, was impressive against the Seminoles in Week 4. Murchison racked up 3.5 of N.C. State’s eight sacks, but a ferocious day rushing the passer wasn’t enough for the Wolfpack, which lost its ACC opener to FSU, 31-13. Bailey Hockman, who started his college career with the Seminoles, played the majority of the game in place of ineffective starter Matthew McKay and threw for 208 yards and a touchdown. However, the N.C. State offense still had its fair share of struggles, converting just 4-of-16 third downs. It doesn’t help that starting tailback Ricky Person Jr. was carted off with a leg injury in the third quarter, and his status moving forward is unknown.

The bye week came at an opportune time for the Hurricanes. Miami gained a chance to reset itself and rest after barely scraping by Central Michigan. Head coach Manny Diaz will have to hope that the Hurricanes’ penalty problems—they committed 13 against the Chippewas and have been whistled 39 times through four games—were put to rest during this week of practice. At the very least, Miami gets the perfect chance to notch its first ACC win of the season as a struggling Virginia Tech side comes to town.

Another ACC team that’s coming off a bye heading into Week 5, the Cardinals will be thankful that the week off gave quarterback Malik Cunningham—who is expected to start against BC on Saturday—time to get healthy, though Jawon Pass, the Week 1 starter, still hasn’t fully recovered from a foot injury. Cunningham has actually been more accurate than Pass this season and played well against the Seminoles in Tallahassee, which should lend Louisville fans some confidence in the quarterback situation. Yet the Louisville defense has also struggled for most of the year and is allowing 344.5 yards per game, which has to be a primary concern for new head coach Scott Satterfield moving forward.

The Hokies were less than impressive to begin the season and are now reeling even more after being crushed, 45-10, at home against Duke on Friday night. The return of wide receiver Damon Hazelton—who finished with 802 yards and eight touchdowns in 2018—was supposed to help a stagnant Virginia Tech offense, and the junior did catch a 72-yard touchdown pass, but the Hokies still managed just 259 total yards. Head coach Justin Fuente’s seat is only growing hotter by the week, and with the starting quarterback situation unclear ahead of a trip to Miami, there’s no reason to think the Hokies are capable of a big bounce-back win at the current moment.

The Yellow Jackets scored just once against Temple, and it wasn’t even on offense. Georgia Tech gained 305 yards of total offense, but turned the ball over three times and only scored on a safety in a dreadful 24-2 loss to the Owls. It’s shaping up to be a long season for new head coach Geoff Collins, whose overhaul of the Yellow Jackets offense perhaps has some Georgia Tech fans wishing for the return of the triple option.