Home » BC Rallies to Beat Wake Forest, Move to 4-0 in ACC Play 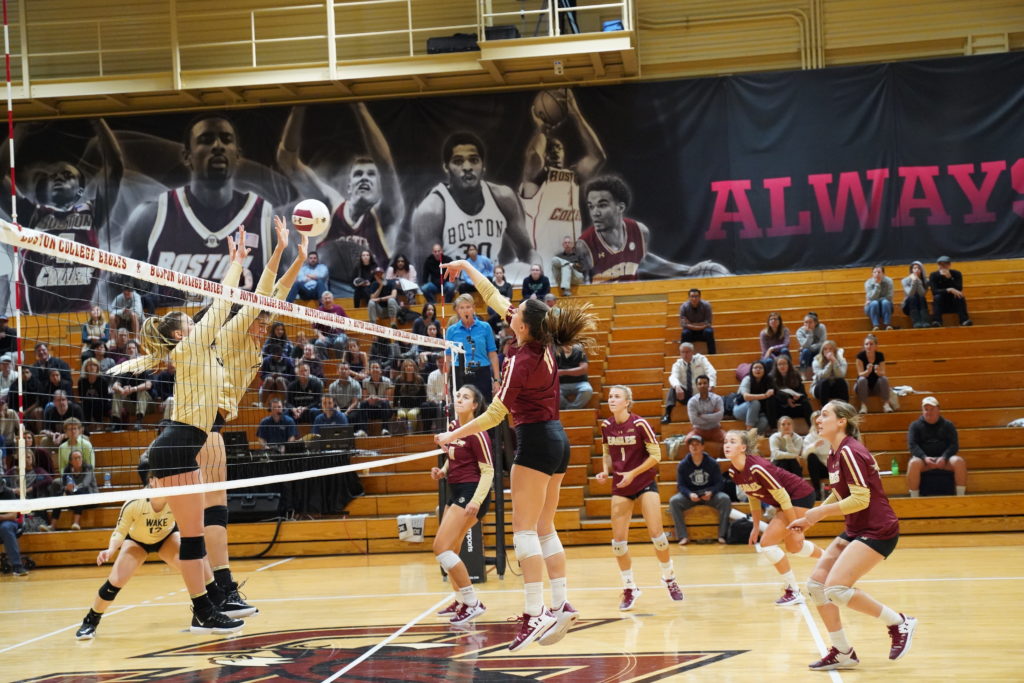 BC Rallies to Beat Wake Forest, Move to 4-0 in ACC Play

In 2018, the first year of head coach Jason Kennedy’s tenure, Boston College volleyball started 2-0 in conference play for the first time since joining the ACC in 2005. In 2019, the Eagles have one-upped themselves. Despite dropping the first set against Wake Forest, BC rebounded in emphatic fashion, beating the Demon Deacons in four sets on Sunday and moving to 4-0 in ACC play for the first time ever.

Wake Forest started the match hotter than the Eagles (13-4, 4-0 Atlantic Coast). The Demon Deacons (11-4, 1-3) rattled off four straight points early, and took a 7-2 lead on a winner from Jaclyn Childress, forcing Kennedy to call a timeout. The stoppage of play briefly gave BC momentum, as the Eagles went on a mini 3-0 run to get back into the set, but they never got closer than that.

Back-to-back winners from Peyton Suess put Wake Forest up, 13-7, and the teams split the next 10 points. Amaka Chukwujekwu and Clare Naughton both tallied points to help BC stay within striking distance, but consecutive errors from Izzy Clavenna and Makenzie Morrison helped Wake Forest take the first set, 25-20, and grab an early lead in the match.

In the second frame, though, it was the Eagles’ turn to start fast. Naughton—who finished the match with a team-high 19 kills—recorded two points and Torey Baum hit a service ace, as BC seized a 13-5 edge. An error from Cat Balido briefly stopped the bleeding for the Demon Deacons, but the Eagles kept pressing on offense. Strockis hit a pair of kills, and Gabby McCaa also popped up with a kill of her own, as BC forced Wake Forest head coach Randi Smart to call a timeout with her team trailing, 20-8.

The pause in play helped the Demon Deacons piece together three consecutive points for the first time all set, as Caroline Rassenfoss logged back-to-back kills to cut the Eagles’ lead to 23-16, but BC ensured no improbable Wake Forest comeback would occur. Naughton fittingly ended the set with one final winner, and BC tied the match with a 25-16 set victory.

The third set saw neither team create much separation. The Eagles raced out to an early 8-3 lead after an error from Madeline Holt, but Wake Forest quickly scored four of the next five points to cut the BC lead to two. Balido, Carly Kutschke, and Strockis—who combined for 23 of the Eagles’ 55 points—all hammered home kills, helping BC hold on to a slim lead.

Eventually, though, thanks to two kills from Paige Sebesta and another from Suess—who notched 12 total—the Demon Deacons were able to knot the set at 22, setting the stage for a dramatic finish to the frame, in which Naughton proved to be the ultimate difference-maker.

The Atlanta, Ga., native came up huge with a winner that gave the Eagles a 24-22 lead. Then, on set point with BC up, 24-23, Naughton provided the final of her nine kills in the frame, helping the Eagles take the set and a 2-1 lead in the match.

Faced with the prospect of a fourth consecutive win to start the conference season, BC didn’t seem to feel any sort of pressure. After a see-saw start to the set saw the Eagles clinging to a slim 11-10 lead, Morrison subbed in and immediately proved to be an offensive spark. The senior libero hit three straight service aces, the last of which gave BC a 14-10 advantage it would never relinquish.

An attack error from Suess—one of six that the freshman committed—extended the Eagles’ lead to 21-13, and Wake Forest never trailed by fewer than eight points from there. McCaa’s winner—BC’s 55th and final one of the match—punctuated a 25-16 set win that closed the match out.

With the victory, the Eagles are just two wins shy of matching their total from all of last season with 14 games to play. Of course, last season BC also started conference play hot but faltered down the stretch and lost six of its last eight games. In Kennedy’s second year at the helm, though, the Eagles have improved their hitting percentage from .208 to .241, and their dynamic attack—which was on full display against the Demon Deacons—seems to be better-equipped to handle the rigors of the ACC.