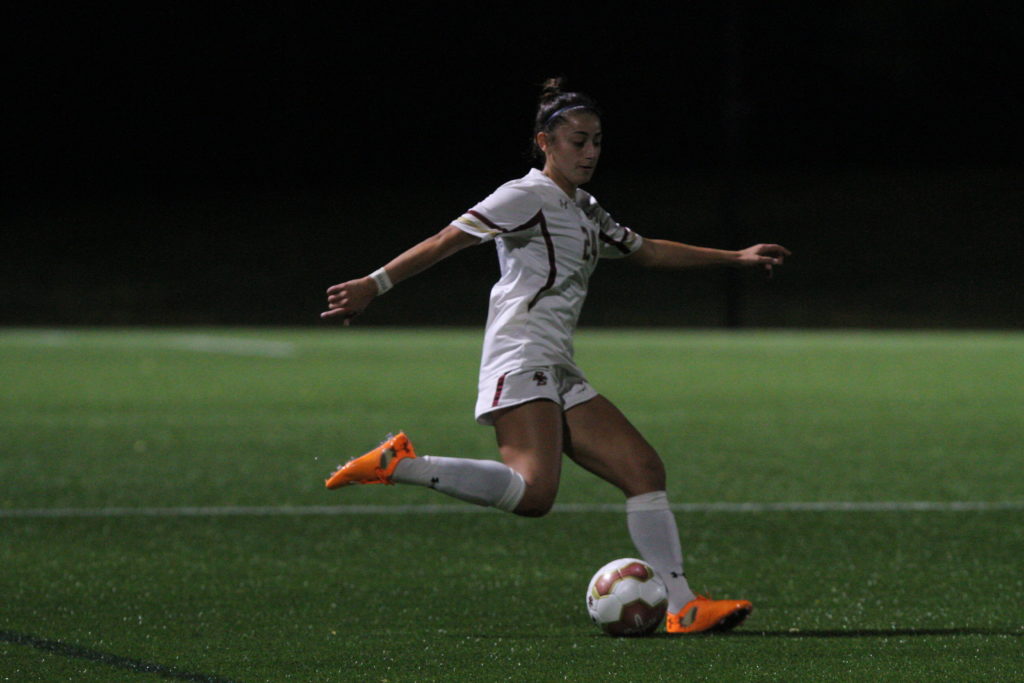 The start of ACC play brought about a roadblock for Boston College women’s soccer and new head coach Jason Lowe. After completing non-conference play unbeaten for the second year in a row, the Eagles entered a Thursday night contest against Pittsburgh having lost three of their four ACC matches this season.

A game against the Panthers seemed to present the perfect opportunity for BC to get back on track—after all, entering 2019, the Eagles held an all-time record of 11-0-0 against Pittsburgh. Furthermore, the Panthers hadn’t won an ACC contest since Oct. 9, 2016. Unfortunately for Lowe and Co., Pittsburgh simply added to BC’s conference woes. Amanda West scored a game-winning overtime goal in the 94th minute to beat the Eagles, 2-1, and hand the Panthers their first-ever win against BC.

The game was chaotic and back-and-forth, with the teams combining for 31 shots and 10 fouls. The first barrage came from the Eagles (8-4-1, 1-4 Atlantic Coast). In the opening five minutes of the game, Jade Ruiters forced Panthers (4-6-3, 1-2-2) goaltender Amaia Pena into the first save of the game, before Jillian Jennings fired a shot over the bar, and Olivia Vaughn had a drive deflected by a Pittsburgh defender.

After that, the teams settled into a more even rhythm, with missed chances on both sides. In fact, the Panthers had the best opportunities to take the lead. In the 40th minute, West—who gave BC defenders problems all game long—dribbled in between two Eagles players and launched a shot that goalkeeper Allie Augur had to palm away with her right hand. Just two minutes later, from the right side of the box, West once again set her sights on goal, but watched her shot bounce off the crossbar, and the teams entered halftime tied.

Pittsburgh didn’t have to rue the near miss for long, though. Five minutes after play restarted in the second half, Cheyenne Hudson played a perfect cross into the box. Julianna Vasquez was in the perfect position, heading the ball past Augur for the first goal of the game.

Faced with the prospect of a third straight loss, the Eagles immediately responded by peppering the Panthers’ goal. Vaughn and Gaby Carreiro both hammered attempts wide, before BC fullbacks Mia Karras and Riley Lochhead also missed the target. A determined Pittsburgh defense was keeping the Eagles at bay, and it appeared that BC would need a little bit of luck to find the equalizing goal.

It was luck they got in the 74th minute. After Ruiters took a corner, the ball was cleared out to Karras, and the junior swung a cross back into the box. Aided by an unfortunate deflection off a Pittsburgh defender, the attempted pass went directly into the back of the net, tying the game at 1-1. Then, Sam Smith had a good chance to score a late winner, but hit the side of the net off a pass from Vaughn. The teams were unable to break the deadlock from there, sending the match into overtime.

Soon enough, however, the Panthers scored the deciding goal, and it came in a manner similar to their first scoring play of the match. Four minutes into the extra period, Hudson drove down the wing, before whipping a floated ball into the middle of the box. West, who had nearly scored twice in the first half, finally got her moment, rising to meet the service and score the winning goal.

The defeat was the Eagles’ third in a row, and perhaps more concerningly, it came to a team that hadn’t registered victory in the ACC in three years and one day. It’s clear that Lowe needs to find some answers in the offensive half: BC hasn’t scored more than one goal in each of its past three games after logging at least two in seven of nine non-conference games. Not to mention that just three of the Eagles’ 17 attempts against the Panthers were on target.

BC—with the dynamic duo of Carreiro and Vaughn on the wings and Smith through the middle—certainly doesn’t lack talent, but is struggling to maximize its potential. With just five matches left in the regular season, Lowe has to find a way to get the most out of his attack fast, or risk seeing the Eagles’ ACC slide continue to the end of the year