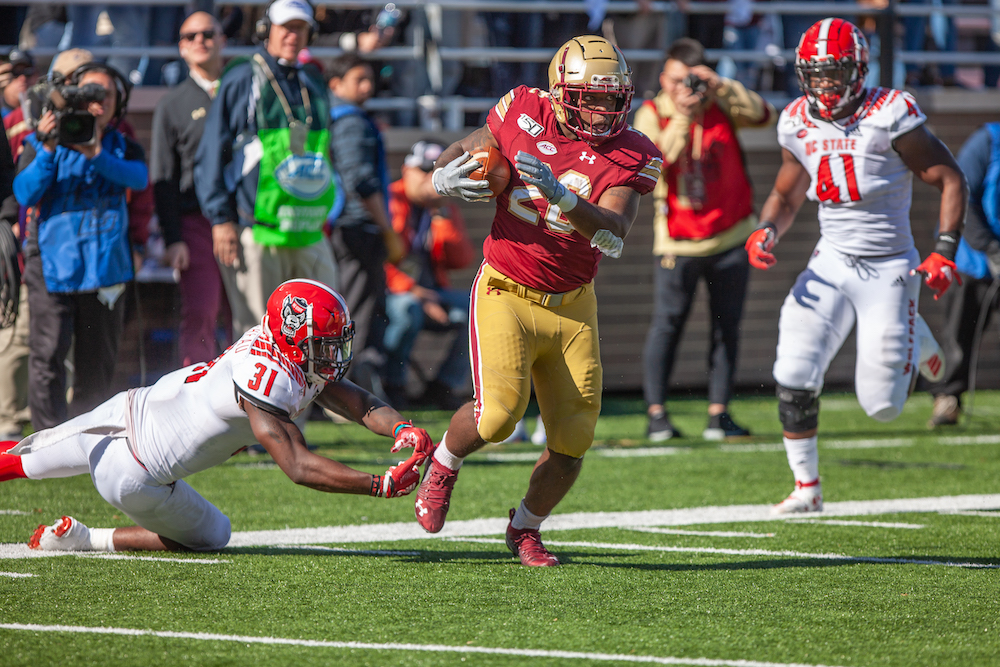 Early in the second quarter on Saturday, with Boston College football quarterback Dennis Grosel just 4-of-12 for 70 yards and the Eagles protecting a slim 7-3 lead against visiting North Carolina State, BC turned to its running game. And, in the span of just three possessions, it guided head coach Steve Addazio and Co. to a decisive 24-3 lead that put the game out of reach.

The Eagles only leaned on their running backs from there, using three touchdowns and 223 yards from AJ Dillon as well as a two-touchdown, 181-yard performance from David Bailey en route to a 45-24 win over the Wolfpack.

“Those backs were running through contact, running for plus yards, kind of unstoppable looking, and I’m very, very proud of that,” Addazio said. “Just super proud of our football team. Life is about responding, and I thought they responded out here unbelievably, stuck together, and did a fabulous, fabulous job.”

Jason Maitre had an eight-yard pick-six to open the scoring gates for the Eagles (4-3, 2-2 Atlantic Coast) as part of a resurgent effort from the unit that was two weeks removed from giving up a program-record 664 total yards at Louisville. BC came up with a pair of goal-line stops and chased Wolfpack starting quarterback Bailey Hockman, who was replaced by Dennis Leary.

“Our defense came out on fire, made some unbelievable plays, held them to 50-something yards rushing, two goal-line stands inside the 2 or 3,” Addazio said. “I thought Jason Maitre’s pick early was a symbol of where the defense was going to be all day long and really gave the offense a chance to get going and establish the run.”

While BC’s defense was making life difficult for N.C. State’s (4-3, 1-2) stable of running backs—it held the Wolfpack to 56 yards on 27 carries—and its two quarterbacks, Dillon and Bailey were churning ahead.

First, it was a 10-play, 63-yard drive in the second quarter that was made up entirely of runs and ended with a 27-yard field goal from Aaron Boumerhi. The Eagles’ next possession—after a quick three-and-out from the Wolfpack—took just three plays, with Bailey going a career-long 54 yards for a touchdown after a holding penalty was called on BC the previous play. Bailey showed patience, breaking a tackle at the line of scrimmage before getting off to the races, shedding two more would-be tacklers along the way.

Then, after another three-and-out, BC took over on its own 13-yard line and didn’t change its offensive philosophy. Despite the Wolfpack entering with the ACC’s top rushing defense in yardage per game, the Eagles’ offensive line and talented duo of backs couldn’t seem to be stopped. Dillon went for a 27-yard run on the first play from scrimmage, then the drive was capped a few plays later by another lengthy touchdown run for Bailey—this time for 48 yards. N.C. State loaded the box but Bailey took it around the edge, breaking a tackle attempt from Malik Dunlap and then bulldozing through Jarius Morehead’s effort at the 10-yard line before tumbling in for the score.

Worries of a second-half setback popped up early, when Wolfpack wide receiver Devin Carter broke a tackle and went 55 yards to set up a 1st-and-Goal, yet BC’s defense again stepped up with its second goal line stand of the game. It was Brandon Sebastian who batted down the pass on 4th-and-1, and a clearly amped up unit only continued to impress. On the other side, the Eagles embarked on a methodical 16-play drive, going from their own two-yard line into the end zone while eating up nearly seven minutes of the game. Dillon was the beneficiary with a two-yard rush, but Grosel impressed with a 24-yard completion to Hunter Long on 3rd-and-9.

N.C. State had its first real answer of the game, driving 78 yards and avoiding a third straight goal-line turnover with a six-yard touchdown pass from Dennis Leary to Thayer Thomas on 4th-and-Goal. Leary impressed in guiding the Wolfpack into scoring position, as he strung together three straight completions of 10-plus yards, including a gorgeous 38-yard pass down the left sideline to Jasiah Provillon. The Eagles put the game away with another run-heavy drive, going 67 plays on nine straight rushes, with Dillon punching it in from three yards out as he was practically untouched.

“I just kept hearing about the No. 1 rush defense in the ACC,” Dillon said. “Not that it necessarily changed the game plan or that we had anything to prove, but when you’re a competitor, you want to go up against the best … That kind of got us going, I would say.”

Leary threw for another touchdown pass after BC’s first three-and-out of the second half, finding Thomas again, but it didn’t take long for the Eagles to answer. Running methodically against a worn-down Wolfpack defense, Dillon capped off a six-play drive with an eight-yard touchdown run on his 34th carry of the game. Leary threw for his third touchdown of the game with two minutes left and finished with 259 yards, but his team’s defense wasn’t remotely good enough to hold BC in check.

“I don’t know where to start,” Wolfpack head coach Dave Doeren said after, per ASAP Sports. “We didn’t tackle well. Didn’t set edges. Didn’t play well enough and have good enough technique. They did a better job than we did is the bottom line.”

The bye week proved to have come at the perfect moment for Addazio and the Eagles, as the defense executed the game plan well and the offense simply overpowered what had been a previously stout N.C. State run defense. BC went with what worked, and that meant Grosel only attempted four passes after the first quarter. That disparity in running and passing likely won’t work against No. 3 Clemson next week, but for now, the Eagles’ defense has something to build off of, and it’s clear that Dillon and Bailey are a formidable duo. The path to bowl eligibility is a lot more visible—matchups with Syracuse, Florida State, and Pittsburgh seem plenty winnable—and BC will only aim to take another step forward after this 21-point victory.