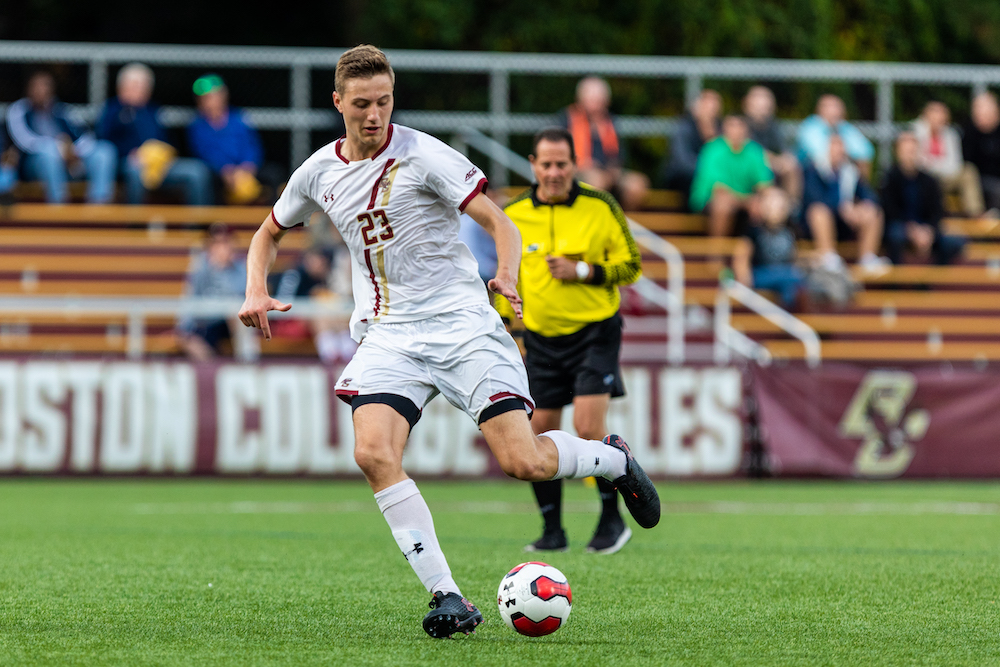 Entering the 90th minute against a talented Louisville side, Boston College men’s soccer was poised to continue an impressive late-season run. The Eagles, on the strength of two Stefan Sigurdarson goals, had a 2-1 edge on their hosts and had a chance to pull their conference record back to .500.

Then, just like that, it came crashing down. Cardinals freshman Lou Getz scored his first collegiate goal 39 seconds later, and teammate Cherif Dieye tacked on the overtime game-winner in the 104th minute, snapping BC’s six-game unbeaten streak with a 3-2 decision.

Louisville (7-4-2, 2-3-1 Atlantic Coast) dominated on the box score, holding a decisive 19-4 edge in shots while taking all nine of the corners in the match, but couldn’t break through against the Eagles (7-3-3, 1-3-2) and sophomore goaltender Christian Garner until the second half. BC held the Cardinals to just one shot on goal in the first half, but Louisville flexed its offensive muscle out of the break.

Still, Garner was nothing short of impressive, very nearly staying unbeaten on the year since winning the starting job seven games ago. He came away with seven saves in the match, but the two late goals from Louisville handed him and BC their first loss since Sept. 20 against Pittsburgh.

The Eagles jumped out to a quick lead, striking in the seventh minute. Tyshawn Rose sent a cross in from the left side to Sigurdarson, and the 6-foot-3 forward rose up in the center of the box to send a header into the bottom right corner past Cardinals goaltender Jake Gelnovatch. It was a largely uneventful rest of the half for both sides, with Gelnovatch being called upon to stop a Mike Suski shot while Garner turned away Louisville’s Bradley Sample on a chance off a corner kick.

Whatever Cardinals head coach John Hayden said in the locker room at halftime quickly had its effect, as Louisville looked much more dangerous offensively. It took under two minutes for the hosts to find an equalizer. Dieye dribbled into the box, deftly beat BC’s Joe Kellett with a dribble move, and sent a low, hard cross through the box. It found a wide-open Izaiah Jennings, who made no mistake in one-timing it into the back of the virtually empty net.

The deadlock persisted until the 72nd minute, when Sigurdarson again rose to the occasion. The freshman added to his team-high goal total with his sixth of the season after Rose fed the ball ahead to him. He slipped past a defender and rifled a shot to Gelnovatch’s left and into the goal. That was followed by Dieye missing the frame on a pair of shots, and the game went down to the wire. Garner made a save on Cameron Wheeler’s effort off a corner kick in the 87th minute, and it seemed like the Eagles were going to escape with another impressive win.

Then, Getz spun around BC’s Alex Mieles on the left side of the box and unleashed a left-footed shot that banged off the inside of the right post and into the back of the net. It was a stunner that saw one Louisville player sink to his knees and emphatically bang the ground in excitement while Mieles had his hands on his head in disbelief.

Momentum in hand, the Cardinals saw shots from Dieye and Wheeler saved in the first overtime period. The Eagles, meanwhile, couldn’t generate much of anything, despite shuffling their roster with a couple of subs. Garner turned away Dieye at the start of the second period, but he wasn’t able to do so twice. In the 104th minute, Kino Ryosuke took the ball down the left side of the box and sent a cross that just deflected off Kellett’s outstretched legs. It flew across to Dieye, who unleashed a right-footed volley that just slipped under a diving Amos Shapiro-Thompson and into the bottom right corner to end the match. Dieye popped back up and shrugged before being mobbed by his teammates, while Garner buried his head on the ground in the back of the net after his quality effort wasn’t quite enough.

It was a frustrating loss for the Eagles, especially as they were just 40 seconds away from a win that would’ve surely launched them into the national polls. Still, BC is playing some of its best soccer right now, and climbing into NCAA Tournament contention. The Eagles will need to have a short memory with a matchup against No. 8 Clemson on the road looming next Friday, but then have two winnable games against Harvard and Syracuse. BC has already clinched its first winning season since 2015, and has a chance at double-digit victories for the first time since that same year.

Dillon, Bailey Run Rampant in Rout of N.C. State
No. 1 Denver Sweeps Weekend Series With BC in High-Scoring Finale