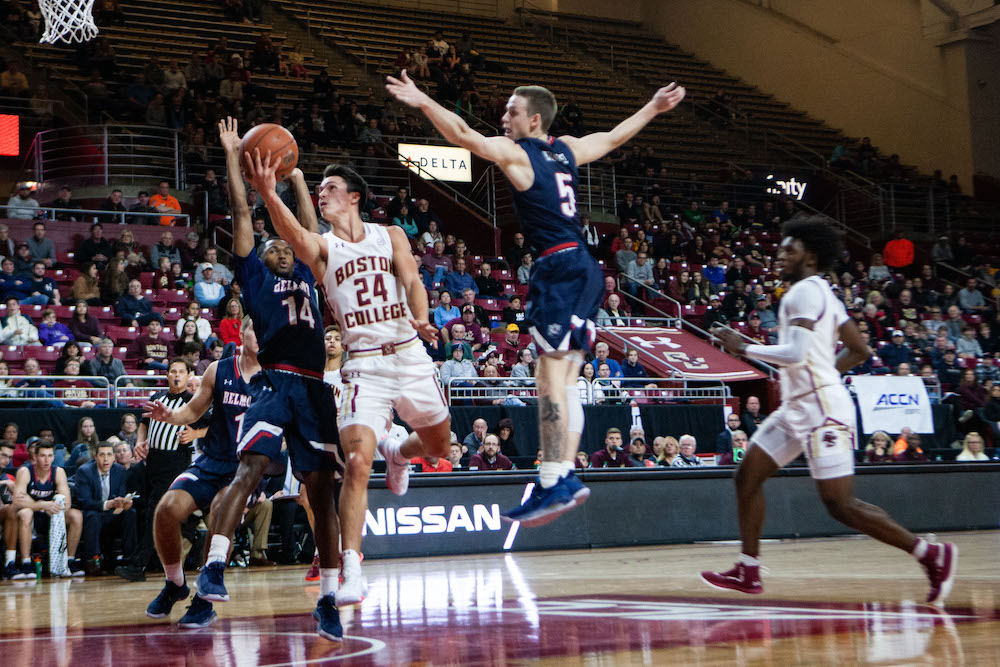 With about six and a half minutes remaining in Boston College men’s basketball’s Saturday afternoon game against Belmont, Derryck Thornton was called for a reach-in foul near halfcourt. Out of frustration, the graduate transfer guard slapped the ball out of Adam Kunkel’s hands, drawing a technical in the process.

After polishing off an old-fashioned 3-point play moments earlier—one that capped a 12-3 Eagles run—Thornton gifted Kunkel, Belmont’s leading scorer, with what turned out to be four free throws. The sophomore, who finished with a career-high 35 points, sunk each one of them, and the Bruins reclaimed their 20-point lead.

Three days removed from holding High Point to just 33 points, the fewest any BC opponent has scored during head coach Jim Christian’s six-year tenure, the Eagles found themselves down, 88-68, to a Belmont team that couldn’t seem to miss from downtown. The Bruins finished 15-of-26 from 3-point land and cruised to a 100-85 victory, marking the first time since 2011 that BC (3-1, 1-0 Atlantic Coast) has conceded 100 or more points in regulation.

Here are a few observations from the Eagles’ first loss of the 2019-20 campaign:

BC couldn’t string together stops or defend the perimeter

Coming into the weekend, BC ranked 56th nationally in defensive efficiency, according to KenPom, and its opponents were shooting a measly 35.1 percent from the floor, all while the Eagles forced an average of 22 turnovers per game. On Saturday, though, BC looked lost on the defensive end of the court.

The Eagles entered tied for 36th in the country in 3-point field goal defense, having limited their first three opponents to 25 percent from long range. But against Belmont (2-1), they were slow on their rotations and, because the Bruins also had their share of success in the paint, BC often sagged inside in anticipation of penetration. As a result, Belmont had space and time to launch an air raid in Conte Forum, one that consisted of 26 attempts from beyond the arc.

Six different Bruins made a 3-pointer in the first half alone, and Belmont started the second period 6-of-7 from deep. The game got away from BC in the latter portion of play, when the Bruins drilled six 3-pointers amid a 22-3 run. Quite simply, the Eagles couldn’t keep pace or disrupt Belmont’s offensive rhythm.

At first, it was an all-out track meet

No team led by more than five points in the first half. Both traded blows over the course of the opening 20 minutes, perhaps no better exemplified than by the big men on the court. Midway through the first half, Julian Rishwain dialed up a beautiful pass to Nik Popovic off the pick-and-roll. Popovic, who racked up a season-high 23 points in the loss, went up for a two-handed flush, and emphatically swung around the rim after the jam. Seconds later, however, Belmont pushed the ball in transition to create a highlight-reel opportunity for its own center. And just like that, all 6-foot-11 of Nick Muszynski was throwing down a dunk.

Swapping punch after punch, the teams continued to counter each other’s scoring plays. Belmont ended the half on a 10-4 run, but the Eagles were only down four at the break and were going toe-to-toe with their opponent on the stat sheet—they were even ahead of the Bruins in the shooting department. BC converted on 61 percent of its first-half shots, compared to Belmont’s 55 percent clip.

When Belmont caught fire from deep, the Eagles got desperate

During the Bruins’ game-defining 22-3 run, BC shot 1-of-5 from behind the 3-point line. As Belmont rained treys, the Eagles tried to match pace but fell flat on their face. Rather than chipping away at the deficit one possession at a time, BC started jacking up 3-pointers, a handful of which were ill-advised.

“I don’t think we stayed composed at all, and I think that starts with our older guys—that’s their job,” Christian said. “And I thought they were the ones that were not composed.”

With a starting rotation as experienced as the Eagles’, such a response is all the more disappointing for Christian and Co. By the time BC reestablished its shot, the game was out of reach, and there was no stopping the Bruins.

Thornton had an up-and-down game, between scoring, injury, and a tech

After shooting just 2-of-9 from the floor against High Point, Thornton looked to redeem himself against much stiffer competition. Initially, it appeared as if the Los Angeles native might be primed for his third 20-point game of the season. Thornton logged 11 points and five assists on 5-of-9 shooting in the first half, in large part because of a six-point surge in the early going.

The graduate transfer ignited a 12-2 Eagles run with a trio of layups, two of which came on the break following Bruin turnovers. Yet, with around nine minutes to go in the period, Thornton went down with what appeared to be an ankle injury of sorts. It was a scary moment for BC fans, but the guard skipped off the court, went to the locker room, and returned to the hardwood in a matter of minutes.

Right before intermission, though, Kunkel picked Thornton’s pocket, setting the stage for the final Belmont possession and scoring play of the half, perhaps foreshadowing what was to come. Thornton had a slow start to the second period, and hit just one of his five shots in the frame. Meanwhile, Kunkel, Belmont’s point guard, was stealing the spotlight. Thornton grew disgruntled, as evidenced by his technical.

BC looked inferior on the glass, especially in the second half

The Eagles lost the rebound battle, 36-22, on Saturday. A third of Belmont’s boards came on the offensive end of the court. The Bruins didn’t miss many shots, but when they did, they were looking to get the ball back then and there. Belmont’s guards accounted for a good bit of the team’s work on the offensive glass, which Christian said was in part because the Eagles lacked effort in the rebounding department.

When all was said and done, sophomore Grayson Murphy—who’s listed at just 6-foot-2—pulled in three offensive boards, just as many as the entire BC team. Although the Bruins only scored seven second-chance points, their 12 offensive rebounds led to more shot attempts and, in turn, wore down BC’s defense.