Jennifer Nash, associate professor of African American studies and gender and sexuality  studies at Northwestern University, came to Boston College to speak about black feminist theory on Nov. 7. Nash was the second lecturer in the New Directions series, which celebrates the 50th anniversary of the African and African Diaspora Studies program at BC.

Nash’s lecture was originally titled “Black Studies Reimagined,” but she renamed it “Citational Desires” because she wanted to focus on the need for black feminists to cite black women in their work. She was inspired by the phenomena of phrases such as “Have you cited a black woman today?” and “Black women did it first” on Twitter—which launched a movement of black feminists demanding that the work of black women be cited in academia.

Throughout her lecture, Nash called for a citational practice that gives care and credit to the work of the “foremothers” of black feminism, while not sheltering black feminist theory in such a way that leaves it closed off to engagement.

There is a growing unease among black academics that the field of black feminism is beginning to include scholars who don’t identify as black women and who may be using the field as a predatory move rather than out of genuine academic interest. A scholar may cite a black woman to give the appearance of being more liberal, instead of having authentic respect for the black woman’s work and genius, Nash said.

Nash said she views black feminists’ call to cite black women as a defensive strategy to manage anxieties around the growing popularity of the field that always considered itself anti-institutional.

Nash said she views the root of this anxiety to be qualms over black feminists’ own will and desire to be institutionalized. She said that she is supportive of citational practices that recognize the black women who are not given credit, but she’s critical of the defensive strategies that close black feminism off from the rest of academia.

Citation can be viewed as a form of undoing past and ongoing violence against black women, Nash said. In this case, the practice is seen as a means of reversing the ways in which black women’s work is often exploited, erased, or devalued. Some scholars, such as Sarah Ahmed, don’t cite any white men as a way to make room for women of color, Nash said.

Some see citations as making up the bricks of a “feminist shelter” and argue that they serve to provide citation trails for other scholars to follow, Nash said. She discussed the term “un-forgetting,” coined by Gayle Wald, a professor of English and American studies at George Washington University. “Un-forgetting” is not just remembering thinkers who have been forgotten, but actively bringing them to the foreground and addressing the structures that caused people to forget them.

In recent years, black feminist scholars have taken up means of “un-forgetting” their black feminist foremothers, placing black women instead of white men at the center of their work. Author Brittney Cooper is a leader in this form of un-forgetting, Nash said. She places emphasis on not just preserving and remembering black women’s work, but actively engaging with it.

Nash said she is in support of citations that do justice to earlier work, but she is ambivalent to projects of “territoriality,” which create a fortress around black feminist scholarship. Nash argued that black feminist scholars should resist the temptation to offer “credentials” that uphold certain works as closer to their idea of black feminism than others.

“What if we imagine black feminists’ ethical and political struggle, not as providing the answer to the question of how you do justice to the past, but as demanding that we sit in the murky space of not yet knowing?” Nash asked.

Nash concluded her lecture with a call for a black feminism that is open toward the future.

“We must take black feminism apart from romantic accounts of black women’s heroism that always neglect black women’s personhood,” Nash said. “What we must reach for, imagined and even frightening as it may be, is a relationship to black feminist innovation that alludes property, captivity, and policing.”

“What we must reach for is perhaps what is most terrifying: a black feminist theory that makes us feel vulnerable—that leaves us open.” 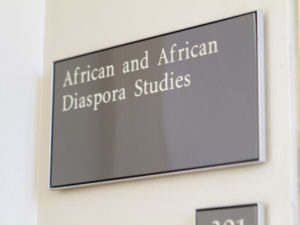 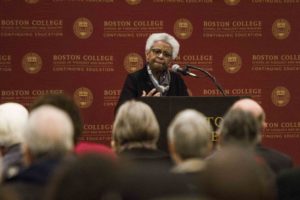