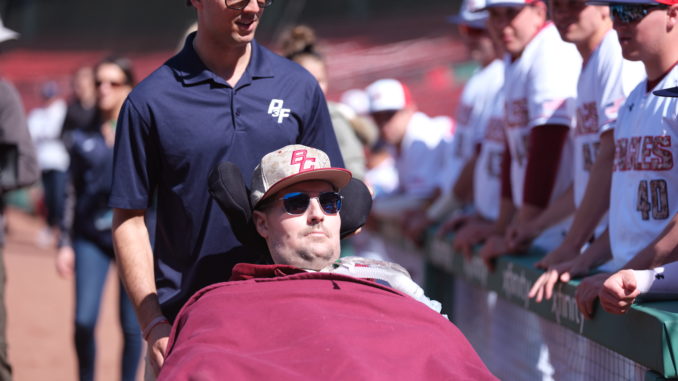 UPDATE: Pete Frates, Face of ALS Ice Bucket Challenge and BC ’07, Dies at 34

Former Boston College baseball player Pete Frates, BC ’07, died on Monday after a years-long battle with amyotrophic lateral sclerosis (ALS), according to a statement from the Frates family released later that day. Frates was diagnosed with ALS in 2012 and became well known for being a driving force behind the 2014 ALS Ice Bucket Challenge.

“There is no one that embodied the spirit of Boston College more than Pete Frates,” Athletic Director Martin Jarmond said in a statement to The Heights. “Pete’s impact not only on our campus but nationally for his efforts in leading to raise awareness for ALS will be remembered forever.”

Frates used social media to promote the ALS Ice Bucket Challenge, eventually becoming the face of the campaign. The ALS awareness-raising effort circulated across the globe and reached millions of people—including Oprah Winfrey and Bill Gates. The challenge has helped to raise over $220 million in search of a cure for ALS.

“Pete Frates possessed the characteristics we hold dear as a university—courage, integrity, selflessness, and a commitment to helping others,” Associate Vice President for University Communications Jack Dunn said in a statement. “He accepted his illness and devoted the remaining years of his life to raising awareness of ALS and helping to raise money for a cure. He is a role model for all BC students and a beloved figure on our campus.”

Frates’ family has also championed the Pete Frates #3 Fund to raise money to cover the costs of his medical care, as well as the Peter Frates Family Foundation to assist other ALS patients with medical care costs.

Since Frates’ diagnosis, the University and the City of Boston have begun multiple other initiatives in Frates’ name. Boston Mayor Martin J. Walsh, BC ’09, named Sept. 5, 2017 “Pete Frates Day” in the city of Boston. In 2014, BC co-founded the Comm Ave. Charity Classic, an annual charity hockey game that raises money for the Pete Frates Home Health Initiative, among other nonprofits.

BC baseball retired Frates’ jersey in 2016, making Frates’ number the second to be retired in Birdball history. The Eagles took a trip to Cooperstown, N.Y. in 2017 to celebrate ALS Awareness Weekend with the Frates family at the Baseball Hall of Fame and Museum. BC baseball also participates in a yearly ALS Awareness Game, founded the year of Frates’ diagnosis.

“The mission that he started the day he was diagnosed lives on in our community, our university, and in our program until we strike out ALS,” said head baseball coach Mike Gambino in a statement to The Heights.

Frates was a center fielder for the Eagles and captained the team as a senior. That year, he led the Eagles with 19 stolen bases. In one of his most impressive games, Frates had an eight RBI performance against Maryland in April of his senior year, including a grand slam, a three-run home run, and an RBI double. He also recorded a team-high eight sacrifice hits in his senior year. Frates became the director of BC baseball operations in 2012.

“When you’re a man of character and live a life of integrity and the cause is just, then people will follow,” said Gambino. “Pete represented everything we want in our student-athletes. He embodied character, toughness, and class—living as a man for others to change the world.”

BC announced in June that it would be naming the latest addition to the Harrington Athletics Village in Frates’ honor. The Pete Frates Center is currently under construction and is scheduled to be completed in August of 2020.

Frates’ memorial Mass will be held at St. Ignatius Church on Friday at 11 a.m. A celebration of his life will be held on the North Shore of Boston at a later date, according to his family’s statement.

Frates’ family members request that their privacy be respected and ask for donations to be made to the Peter Frates Family Foundation at 21 Landers Drive, Beverly, MA 01915, or online at petefrates.com/donate.

Featured Image by Sam Zhai / For The Heights