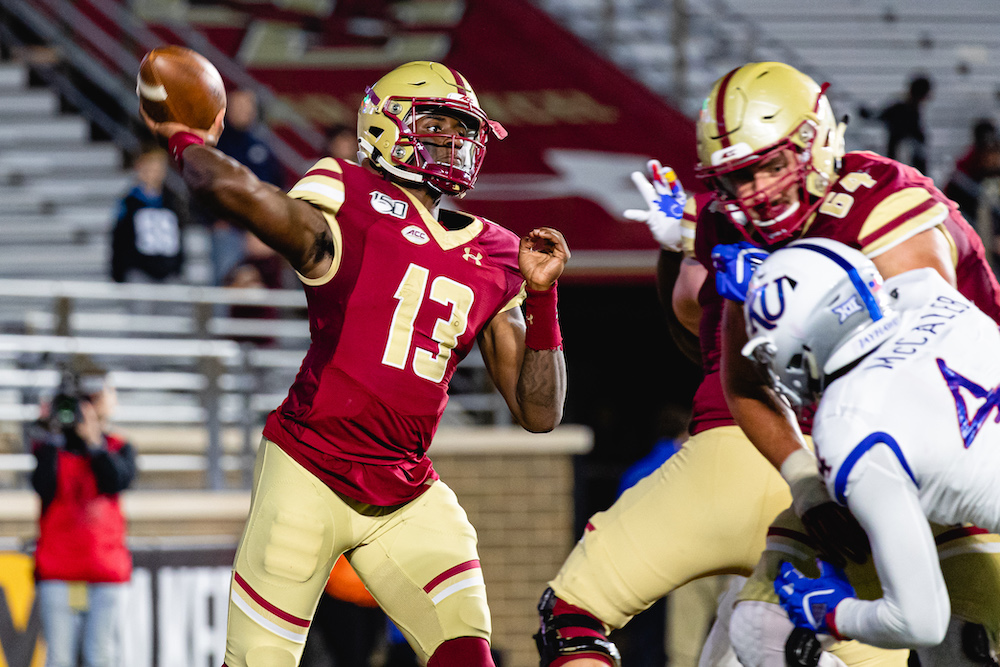 Anthony Brown, a three-year starting quarterback for Boston College football, entered the transfer portal on Monday afternoon. This decision comes a week after the firing of head coach Steve Addazio and a few days after reports surfaced about offensive coordinator and quarterbacks coach Mike Bajakian being potentially hired away by Northwestern.

Just because Brown is in the portal doesn’t mean that he’s set on leaving Chestnut Hill. In fact, Brown even retweeted multiple tweets that echoed that point. The portal allows players to publicly display their desire to scope out other programs, making the transfer process more transparent.

Brown is still recovering from a season-ending left ACL tear that he suffered at Louisville in Week 6. The Cliffwood, N.J. native tore his right ACL in Week 11 of the 2017 campaign, a 17-14 loss to then-No. 23 North Carolina State. He also missed practically the entire College GameDay-featured matchup against then-No. 2 Clemson in 2018 after suffering an internal body injury in the first quarter.

In 28 games at BC, Brown has recorded a total of 40 touchdown passes, 20 interceptions, and 4,738 passing yards. After redshirting the 2016 season, he beat out Darius Wade for the starting job during 2017 training camp and improved each year under center. Brown, who completed just 51.9 percent of his passes as a redshirt freshman, connected on 59.1 percent of his attempts through six games this year. He’s also upped his yards per pass attempt each season, going from 5.3 yards per attempt in 2017 to 9.1 in 2019.

Brown’s best statistical season came in 2018 when he tossed 20 touchdowns—the most in a single season by a BC quarterback since Matt Ryan in 2007—and just nine interceptions. He came back from his first ACL tear better than ever, leading the nation over the course of the first three games with a 240.2 passer rating and ranking second in the country in yards per pass attempt (13.0). Those stats dipped as the season wore on, but he still threw for over 250 yards on four separate occasions—a mark he only reached once as a redshirt freshman.

This year, Brown played under Bajakian, who replaced former offensive coordinator Scot Loeffler in the offseason after Loeffler was hired as Bowling Green’s head coach. The two worked well together, as Brown showed improvement in all major categories. Brown particularly excelled in throwing the deep ball, completing two 50-plus yard passes in Week 1 alone, one shy of the Eagles’ season total in 2018. While he never established a rhythm against Kansas and got off to a slow start at Rutgers, the upperclassman signal caller strung together high-caliber drives in 2019 that made his injury at Louisville—a game where he started 6-of-7 for 193 yards—all the more disappointing for BC fans.

As with most head coaching hires, the announcement of Addazio’s replacement could very well determine whether or not Brown stays at BC.