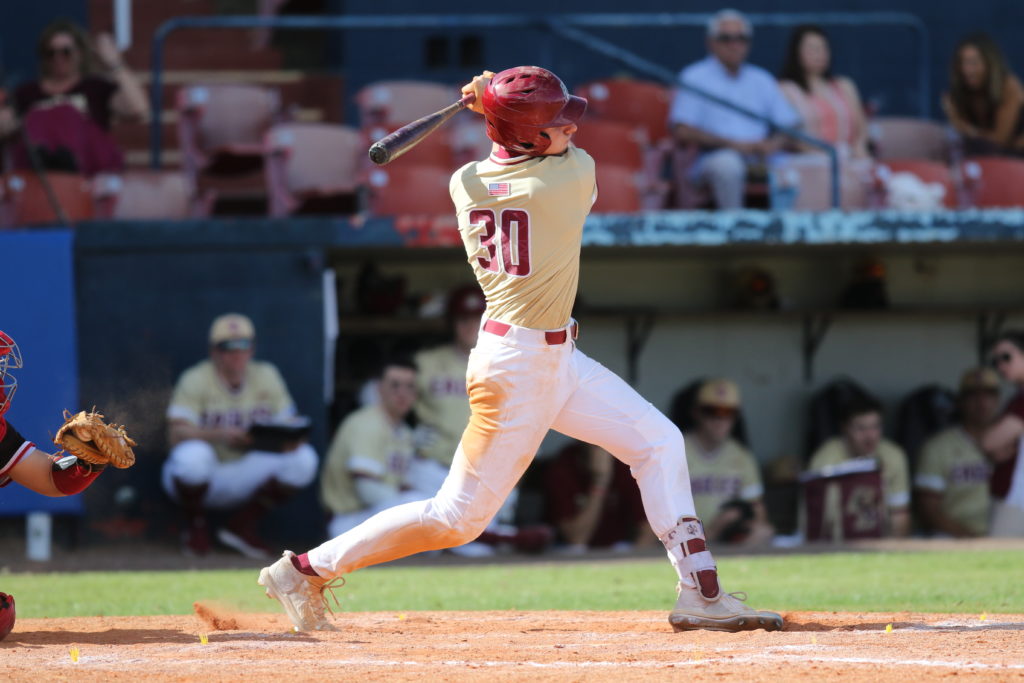 Twenty-nine in four games. That’s the astounding number of how many runs Boston College baseball scored against Northern Illinois in a four-game series in Florida this weekend. Despite a particularly lackluster effort against NIU in the final game of the series, the Eagles started their season off on the right foot with three straight wins. Led in runs by Sal Frelick and Brian Dempsey, the Eagles’ offense proved to be too much for the Huskies. BC showed it could get the work done in just about every fashion this weekend. The Eagles proved they could jump out to an early lead and never be caught, and that they could stay tough in a close game. Perhaps most importantly, they proved they could maintain composure and still be fresh enough to easily win three games in two days.

Despite winning their first three games and scoring a combined 26 runs through those three matches, the Eagles fell back to earth in a disheartening 12-3 defeat against Northern Illinois. The Eagles scored the first run of the game, but it was all Huskies from then on. Northern Illinois rattled off five unanswered runs before BC could get its second on the board. The Huskies then followed that sole run with another seven unanswered between the fourth and seventh innings. NIU’s Dylan Lonteen and Dylan Larson each scored four runs and combined to hit 6-of-7 on the day.

But what helped NIU earn its first win most was that BC’s pitching was every bit as bad as NIU’s hitters were good. Emmett Sheehan recorded the loss after starting the game and surrendering the first five runs through 2.2 innings pitched. The right-hander earned just two strikeouts while on the mound. His successor, Michael Marzonie, had the same number in the same amount of time, while righty Zach Pitzl notched one strikeout.

In the second game of Saturday’s double-header, the Eagles managed to keep NIU at an arm’s length for most of the game. Frelick, the hero of the Saturday opener, reached base on all five of his at-bats. Frelick recorded two singles and was walked three times. Jack Cunningham went 3-4 with a key RBI double and sophomore right-hander Joe Mancini recorded three strikeouts in his four-inning start. It was a solid win for BC, its third straight. Joe Mancini pitched the first four innings and allowed all five of NIU’s runs in that time. Aaron Soucy notched a homer in the second inning to set up an Eagles lead that never went away.

After the Eagles enjoyed a comfortable 7-2 win against Northern Illinois on Friday, BC was locked in a barn burner with the Huskies for the first game of the double header. After giving up two runs in the first, the Eagles responded with a five-run second inning. Luke Gold hammered a three-run shot down the left-field line to tie the game at three runs apiece before seniors Dempsey and Dante Baldelli added RBI singles of their own.

But for all the good work Mason Pelio did on the mound in the first game of the series, BC’s pitching was lackluster in Saturday’s first game. The Eagles pitchers surrendered 10 runs, including four in the ninth inning alone. Sal Frelick, however, bailed them out. Frelick slid a single down the first-base line with two outs in the bottom of the ninth to earn a narrow victory and keep the Eagles’ record untainted by a loss.

The Eagles started off the season on the right foot, winning the first of their four games against Northern Illinois in a resounding fashion with a final score of 7-2. The Eagles’ bats did most of the damage early on, scoring four in the first inning alone. Sophomore outfielder Sal Frelick got things going with a lead-off double in the bottom of the first. On the very next pitch, Brian Dempsey drove a deep two-run shot straight to left field. Dempsey would finish with four RBIs on the day. Defensively, the Eagles were solid as well. Mason Pelio tossed five innings, along with four strikeouts, in his first start this season. Pelio had runners on base in each of the five innings he pitched but only allowed two runs in the fourth. All in all, it was a promising start to the 2020 season.