Home » Eagles Get Revenge in Battle of Comm. Ave. 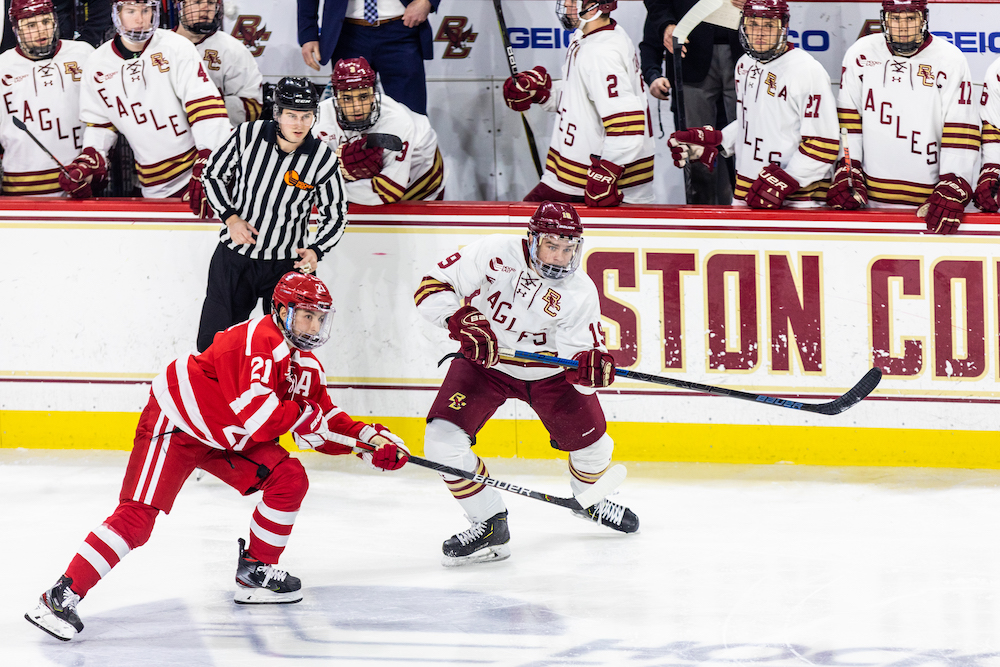 Eagles Get Revenge in Battle of Comm. Ave.

Heading into Friday’s match up against crosstown rival Boston University, Boston College men’s hockey had high hopes. Already the No. 1 seed in the Hockey East Tournament, the Eagles were looking to clinch the regular-season conference title in this year’s third battle of Comm. Ave. The No. 4 Eagles (23-8-1, 16-6 Hockey East) headed into the evening boasting the best offense in the country, and after an impressive defensive effort led by Spencer Knight, BC edged out BU, 4-1.

BU (12-12-8, 9-8-5) came out strong. Less than ten seconds after the faceoff, Robert Mastrosimone ripped a shot on Knight. The freshman was able to deflect the shot and the resulting rebound, denying the Terriers an opportunity to take an early lead.

The Eagles didn’t take long to attempt a response. David Cotton closed in on BU goaltender Sam Tucker and took a shot of his own. The puck nicked Tucker’s shoulder, and the score remained locked at zero. After a fast-paced start to the period, both teams saw quality scoring opportunities, but it was the Eagles who were able to capitalize first.

When David Farrance fell in his own zone, BC’s deadly freshman line struck again. Matt Boldy went for the puck, and the defense flocked to him. Realizing the opportunity, Boldy passed to Alex Newhook, who connected with the puck and slipped it in the cage, netting his 19th goal of the season.

While taking the early lead, the Eagles were put on the defensive when Mike Hardman was called for checking Jamie Armstrong into the boards. Despite spending the entirety of the power play in BC’s zone, BU couldn’t connect.

Late in the period, the Terriers nearly tied up the score heading into the first intermission, but Knight was there yet again. Jake Wise closed in on Knight and attempted to best the Darien, Conn. native, but he was there to snatch his shot out of the air, robbing BU the opportunity and keeping the Eagles’ lead alive.

Desperate to get on the board in the second period, the Terriers took control of possession right away. But even after getting pounded by shots in the first five minutes, Knight was ready for every one of them. Jack DeBoer ripped a shot from the circle, aiming between Knight’s shoulder and the pipe, but the freshman saw it and grabbed it out of the air. A minute later, Knight lost his stick, but it didn’t stop him from sliding to cover the puck and keep BU scoreless.

The Terriers continued their offensive campaign throughout the period. Trevor Zegras wrapped around Knight to try to strike from behind, but after one shot and two rebound attempts, he couldn’t solve the goaltender.

After eight minutes spent in their zone, the Eagles found another golden opportunity. Marc McLaughlin broke away to bring BC into the Terriers’ zone, and Connor Moore took a chance. Firing through traffic with a shot Tucker couldn’t see, the senior increased the Eagles’ lead to two, showing that BC’s defense is just as deadly as its offense.

The final frame was initially tame, but after five minutes, David Cotton struck gold. With no defense in front of him, he had a clear shot on Tucker. The goaltender couldn’t get to it in time, and the shot went right by him, providing the Eagles with their third unanswered goal.

When Moore was called for tripping halfway through the period, the Terriers had given their second power play and a chance to get back in it. After three unanswered BC goals, they were able to connect on an opportunity less than 10 seconds into the power play at the hands of their offensive go-to, Patrick Curry.

The Terriers tried to build off the momentum, but Knight was ready for every shot they took on him. The Eagles took their own chances on Tucker, but despite settling in BU’s zone, they also couldn’t get through the defense to add onto their lead.

BU pulled Tucker in the final two minutes in exchange for an extra skater. With the advantage, the Terriers quickly moved into BC’s zone. Following some extracurricular activity, Moore and Wilmer Skoog—who notably netted the game-winner in the teams’ Beanpot matchup—were both called for roughing. The added defensive challenge didn’t faze the Eagles, as Graham McPhee was able to break away and take advantage of the empty net, securing a fourth goal for the Eagles and a regular-season conference title.