Koch Proposal No Longer Has Faculty Vote, Advisory Board Removed

The proposal for a security studies program housed in the political science department, to be funded by the Charles Koch Foundation, has now been relabeled as a “project,” rather than a “program,” according to political science professor David Deese.

The change means that political science faculty will no longer be able vote on whether the proposal will move forward. Additionally, Deese said that a faculty advisory board will no longer be required to oversee the funding.

Deese said he believes the change was made because supporters of the proposal thought that it would have been voted down otherwise. There is little difference between designating the proposal a project as opposed to a program, Deese said, except it eliminates the ability for the political science faculty to vote on it.

Deese, political science professor Ali Banuazizi, and several other faculty members criticized the change, noting that the proposal is almost entirely the same, only with less faculty oversight.

In a meeting of professors opposing the funding, one professor asked how a proposal including a five-year faculty hire, significant funding, and oversight on postdoc, master’s, and doctoral students could be considered on the same level as a standard research project.

When asked about why the change was made, professor Robert Ross—a major proponent of the proposal—and department chair Gerald Easter declined to comment.

Easter said The Heights should talk to Ross for comment on the state of the proposal, but Ross redirected The Heights to Easter.

Ross declined to say where the proposal is in the approval process. Two security studies professors also did not comment: Professor Timothy Crawford did not return an emailed request for comment, and professor Jennifer Erickson declined to comment.

One security studies professor, Jonathan Kirshner, a recent BC hire from Cornell University who supports the proposal, said that he did not want to go into specifics due to his unfamiliarity with the BC process.

“In my experience it is perfectly natural and normal for draft proposals in development that faculty are discussing amongst themselves to evolve and take on different trajectories over time as the strengths and weaknesses of various aspects are rehearsed,” Kirshner said in an email.

Morrissey College of Arts and Sciences Dean Gregory Kalscheur did not return an emailed request for comment, and Provost and Dean of Faculties David Quigley declined to comment.

Deese has long been an opponent of the Koch funding, listing concerns over the foundation’s ties to white supremacy, climate change denial, and infringement of academic freedom in an interview with The Heights.

“It is morally wrong to work with a foundation who has long-term, clearly documented connections to bad actors and bad causes,” Deese said. “It’s not just white supremacy.”

Easter said that the foundation’s values were taken into account in the consideration of the proposal in an email, obtained by The Heights, that was sent to Climate Justice at BC on Feb. 23. The email was a response to the group’s Fossil Fuel Divestment Day protest, which called for rejecting the Koch funding, among other demands.

“Be assured that the decision of the Security Studies professors was not made without first considering, researching, and debating the issues of academic integrity and political morality related to the Koch foundation,” Easter said in the email.

Easter also said in the email that he does view climate change as a significant security threat, but escalating threats of war and nuclear weapons—which would be studied through the funding—also necessitate research.

Deese said that proponents of the proposal have assured that because the funding would come with no strings attached, there should not be concern over interference with academic integrity. The funding does not need any strings attached because the Koch Foundation already knows the project’s research would be in line with its views, Deese countered in his interview with The Heights. 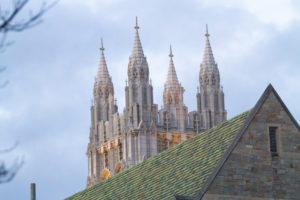