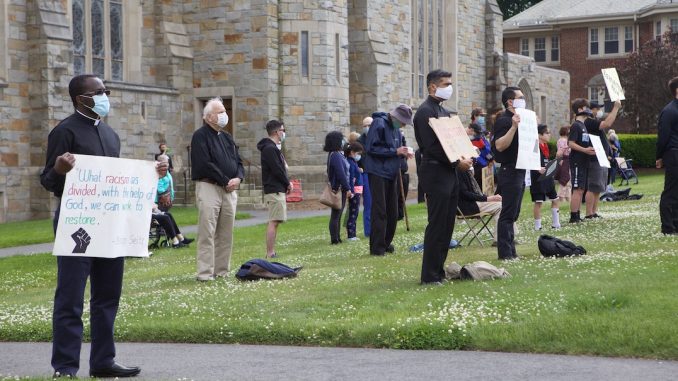 Facing outward toward Commonwealth Avenue, a crowd of about 100 protesters, including Boston College students and Jesuits, covered the lawn of St. Ignatius Church on Sunday afternoon.

At the demonstration, organized by students from Boston College’s School of Theology and Ministry (STM), attendees stood in silence to protest racial inequality and police brutality. The event is one of many in the Greater Boston area to have occurred since a police officer killed George Floyd by placing his knee into Floyd’s neck for more than eight minutes.

The protesters, mostly dressed in black, assumed their positions on the grass at approximately 3 p.m. and silently watched cars pass by BC’s campus. Some protesters held large signs and placards with the phrase “Black Lives Matter.” Others held posters with statements such as “Reparations Now” and “8 min 46 sec”—the length of time Minneapolis police officer Derek Chauvin knelt on Floyd’s neck. One Jesuit held a sign with a quote from Bishop Rev. Mark J. Seitz: “What racism has divided, with the work of God, we can work to restore.”

Most of the protesters, though, came to St. Ignatius empty handed, standing with their arms limp at their sides or their hands clasped behind their backs as they looked onward at the passing cars.

Brian Strassburger, S.J. and STM ’21, recently completed his second year of studies at STM and will be ordained as a priest next June. He recollected the fruitful conversations he’s had with fellow members of his Jesuit community in the aftermath of Floyd’s death that inspired him and his colleagues to coordinate the demonstration.

“There are a lot of great events happening around the city—we want people and encourage people to participate in those as they are able,” Strassburger said. “We also thought it was important that our church and faith community here in Chestnut Hill had a place for people to gather together, spend time in prayer, and serve as a public witness to the importance of Black lives, that Black Lives Matter.”

With the exception of a few participants who were unable, the protesters remained on their feet for two hours—save for eight minutes and 46 seconds, during which the protesters knelt in honor of Floyd.

“For me, to sit there in prayer for that duration of time on my knee is a moment that I think is very transformative in my own heart and calls me to conversion,” Strassburger said.

Several attendees felt that this was the most powerful moment of the protest. Maria Del Villar, a doctoral student in the theology department and GMCAS ’24, emphasized that her attendance was especially important because of her Catholic faith.

“As a theology student, and as a member of the church, I cannot be silent with what’s happening,” Del Villar said. “We have to give witness to our faith, and that’s a faith that does justice. That’s a faith that considers everybody equal regardless of their gender, their sex, their nationality, or whatever.”

The demonstration ended around 5 p.m., when the protest’s organizers returned to the sidewalk separating the lawn from Comm. Ave. and the event concluded in prayer. Eric Immel, S.J. and STM ’22, prayed the rosary by reciting the Lord’s Prayer and the Hail Mary over and over. He dedicated the five mysteries to the March on Washington, the Civil Rights Act of 1964, the march from Selma to Montgomery, the Voting Rights Act of 1965, and finally, “those who risked their lives in the struggle for civil rights.”

“I think ending in common prayer to show not only the unity of the people gathered here in prayer, but the unity of the international church—which is necessarily a church of diversity—especially on Trinity Sunday when we celebrate the mystery and diversity of our God, the way that we’re all a part of that diversity … was a fitting way to end,” Immel said. 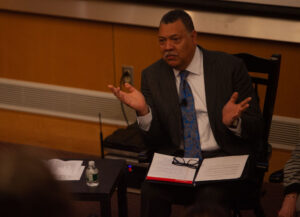