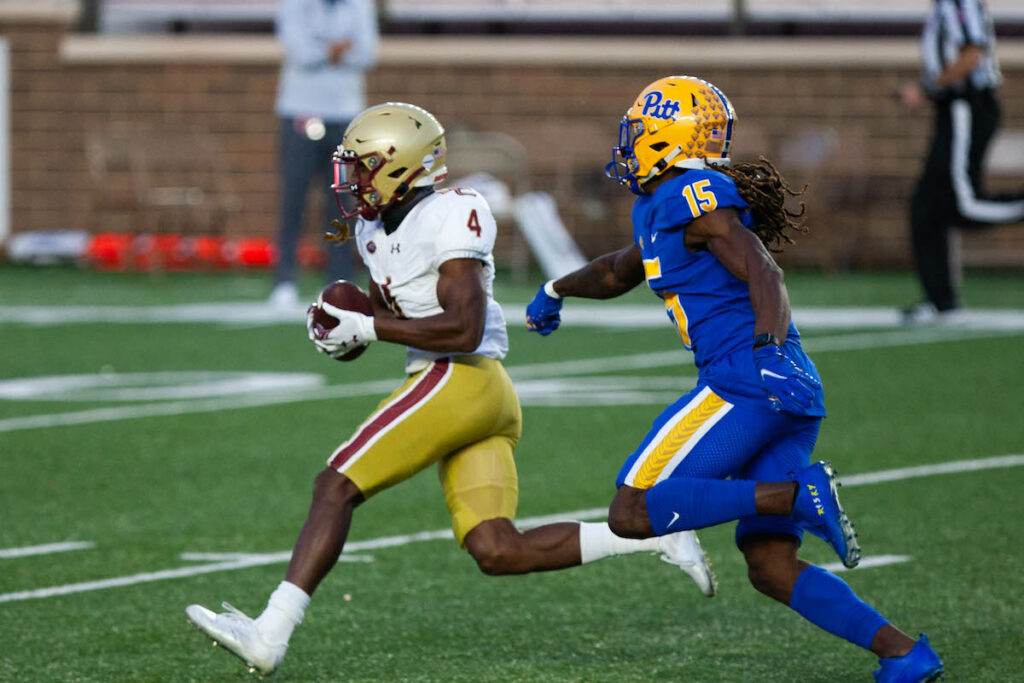 Welcome back, ladies and gentlemen, to the Zay Flowers show. He’s been pretty much on hiatus for Boston College football’s last two games, but the sophomore receiver has finally found the spotlight once again.

In Saturday’s game, Flowers looked more like a ballerina than a football player, elegantly dancing out of coverage and into the end zone time after time. With the symphony of the fabricated crowd noise swelling around him, Flowers’ heroics, combined with a missed extra point in overtime, handed BC (3-1, 2-1 Atlantic Coast) a miraculous 31-30 win over Pittsburgh (3-2, 2-2).

It was Flowers, of course, who gave BC its go-ahead score. Two incompletions to start overtime from quarterback Phil Jurkovec looked like a grave start for the Eagles, but on third down, Flowers danced around a Panther defender and grabbed a 25-yard dart in the middle of the end zone.

It was his third score of the game, and his first two were no less elegant. To open his career night, Flowers reeled in a 44-yard bomb from Jurkovec as he tiptoed past his defender on a corner route, giving him wide-open space in the left corner of the end zone. With the score, BC held a narrow 10-7 lead over Pitt in the opening minutes of the second quarter.

He followed it up in just the second play of the second half, as he found a wide-open lane for a career-long 77-yard catch-and-run TD. With 162 yards and all three of BC’s touchdowns through the air, he’s an obvious contender for his second ACC Receiver of the Week honors.

Flowers said he hadn’t played a game in overtime since his junior year of high school, but he said even so, his confidence never wavered.

By the time Pittsburgh’s Alex Kessman came in to attempt the game-tying extra point in overtime, he had already missed a 49-yard field goal and a 55-yard field goal, and made a 58-yard field goal with the wind at his back. In crunch time though, the ball wobbled wide to the right, and BC’s entire sideline exploded onto the field.

Jurkovec accounted for BC’s other touchdown on a two-yard QB sneak, which as QB sneaks go, is sort of an unconventional distance. A mixup between the officials pushed the line of scrimmage back one yard after Frank Cignetti Jr. had already drawn up the play, but the Eagles ran with it even so.

“We thought the ball was going to be spotted at the one, and then they moved it back,” Jurkovec said. “I glanced back to the sideline to see if we really wanted to do it, but with our offensive line and the push that we get [on] a sneak, we could probably run it every play.”

But as much as Flowers and Jurkovec were stars in the show that was Saturday’s game, the supporting cast played just as important of a role. All game long, Hafley rotated player after player in at practically every position, keeping first-stringers rested and giving understudies the chance to show their chops.

What was new for BC, however, was a hard-hitting offense from the very first minute of the game. In BC’s opening games against Duke and Texas State, it really took until the second half to get going. But on Saturday, BC attacked the field from the first whistle. Playing a no-huddle offense throughout the first quarter put Pitt’s defense “on their heels,” as Hafley put it.

“We wanted to start fast,” Hafley said. “That was the whole theme of today.”

One thing that gave BC the leg up in the offensive game was its reliance on the pass game. All night, Pitt packed the box in an effort—a successful one at that—to stop the run game. BC notched just 30 total yards on the ground, including a loss of 42 on five sacks of Jurkovec. But with Pitt’s heavy focus on the run, BC was free to exploit the passing lanes.

“We’re going to take shots, especially when teams are selling out to stop the run against us,” Hafley said.

But as glorious as the final movement was for BC, the Eagles stalled for a large portion of the second half. The Eagles’ defense allowed 10 points in the second half while the offense scored just seven, which came on Flowers’ 77-yard catch just 34 seconds in.

Jordan Addison, Taysir Mack, Jared Wayne, and Shocky Jacques-Louis combined for 214 yards receiving, 108 of which came in the second half or overtime.

As a result of the second-half lull, tensions ran high in overtime. BC’s last three games have each been decided by less than one score, but as has been the theme all season, the players never lost confidence.

“That’s the beauty in football: There’s the ups, there’s the downs,” linebacker Max Richardson said. “This game was very back and forth. … And Coach Hafley, he just always believes in us and instills confidence in us.”

Flowers, even as a sophomore, has shown his adept ability as both a player and a leader, and both his teammates and Hafley sang his praises after the game.

“I think he’s one of the best receivers in the country,” Jurkovec said about Flowers. “The way he can move is unlike really anybody I’ve seen.”

And with that much elegance in his game, maybe we’ll see him in the Joffrey Ballet one day.