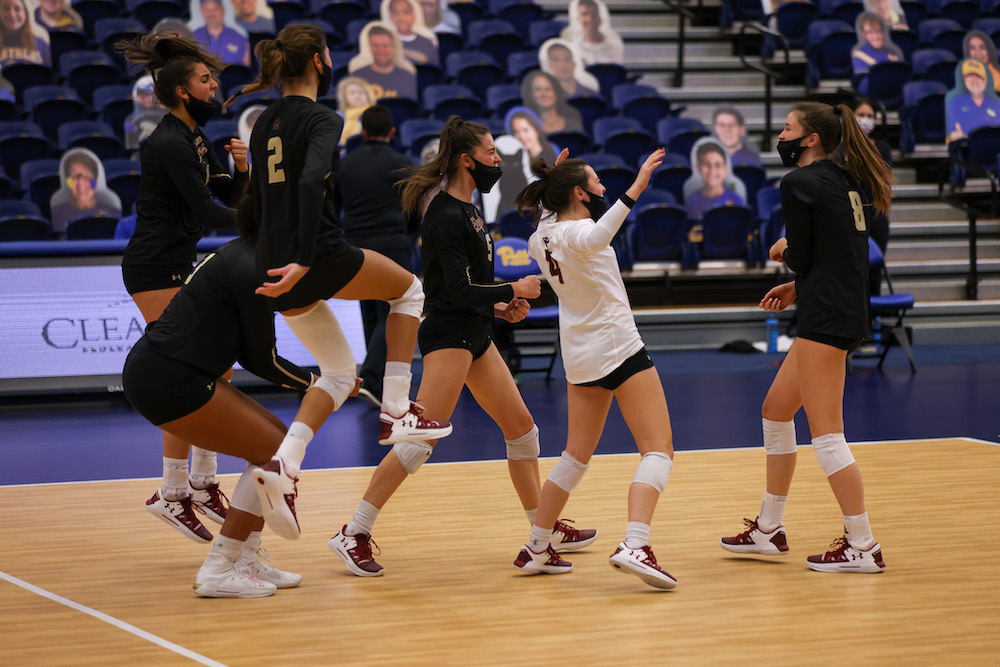 Eagles Shut Out by Panthers in Second Straight Series Sweep

If there’s one thing Boston College volleyball has struggled with most this season, it’s starting on time. In each of the Eagles’ (0-4) four starts, they have been shut down by the opposing team, unable to get on the offense. Saturday night’s game against No. 11 Pittsburgh was no different. The Panthers (2-2) continued their dominance from the previous matchup and crushed the Eagles for the second time in as many nights.

History repeated itself as the Panthers went on a dominating run to quickly take the lead in the first set. Led by seniors Kayla Lund and Chinaza Ndee, Pitt tallied seven unanswered points against the Eagles, an early advantage that mirrored the previous night’s game. A timeout called by head coach Jason Kennedy midway through the Panthers’ run was unsuccessful in halting Pitt’s momentum, but Amaka Chukwujekwu soon made a kill to end the run and put the Eagles on the board.

Chukwujekwu’s kill, however, was not enough to stop the Panthers in their tracks. The senior middle block tipped a Pitt kill wide and a double block by Ndee and Sabrina Starks maintained the Panthers’ upper hand in the first set. And while the Eagles were able to go on a couple of two-point runs, Pitt’s lead was too great to surpass and it decisively secured the first set 25-10.

The second set began similarly to the first, with the Eagles finally beginning to wake up and compete. While the Panthers went on a brief run and snagged the first three points, BC fought back and tied the set at three off a block from Gabby McCaa. From that point on, the floodgates had begun to open. Rather than succumbing to a more experienced opponent, the Eagles began to force themselves into contention, exchanging points with the Panthers.

After going down 8-6 due to a service error from Bridget Green, the Eagles went on their first long run of the match, scoring five points and taking their first lead of the night. But the advantage didn’t last long, as Pitt quickly went to work eliminating its deficit, responding with a 7-0 run of its own.

Back-and-forth kills by Lund for the Panthers and Clare Naughton, Silvia Ianeselli, and Alayna Crabtree for the Eagles put BC back on top for the second time and forced a timeout call from Pitt head coach Dan Fisher. Off the break, Ndee made two kills to keep the Panthers in line with the Eagles, but return errors and an illegal touch by Kylee Levers kept the lead easily in BC’s hands.

But as was beginning to feel familiar for the Eagles, everything began to fall apart. Senior captain Naughton fought to maintain a lead for BC, but back-to-back aces by Pitt sophomore Lexis Akeo put pressure on the Eagles as the Panthers took the lead at 22-21. Ianeselli made a kill to bring the score to 24-23 to stave off a match point for Pitt, but Ndee returned with a kill of her own to close out the second set in favor of the Panthers, 25-23.

And with the second set logged into the score sheet as another loss for the Eagles, the third set almost seemed doomed. In Friday night’s game, BC’s fight in the second set came out in its favor, but the momentum failed to carry through to the third and fourth set, as had happened against No. 9 Louisville the week before. The difference this time being that the Eagles’ valiant efforts in the second set were in vain, as they fell to Pitt so close to the finish.

The third set played out almost the same as the first with the small exception that BC got first blood with a kill by Chukwujekwu to start the set. While the two teams began the set by exchanging points, Pitt began to pull away from the Eagles, going on an 8-2 run to bring the Panthers up by nine heading into the final stretch. Similarly to the first set, late efforts by BC were unsuccessful as the Panthers clinched the final set and the match, 25-19.

Lund and Ndee led the Panthers with 16 and 17 kills respectively, and if the Eagles are going to be competitive within its ACC pod this season, they’re going to have to find a way to shut down those kinds of players. Whether at the net or in the backcourt, both Lund and Ndee found open court on BC’s side to place a perfect kill.

This is the second time the Eagles have been shut out during a series sweep this season, and they’re only two weeks into this fall’s modified campaign. Next weekend’s road matchup against No. 8 Syracuse isn’t going to be any easier, so BC needs to seriously reevaluate its play and change what isn’t working before it can take on the Orange.