Go Figure: The Numbers Behind the Historic Battle of Comm. Ave.

For a brief moment last week, it looked like Boston College men’s hockey would play the closest thing it could get to the Beanpot this year. The Eagles were all set to take on Boston University in a home-and-home series on Jan. 23 and 24, but the Terriers went on a department-wide pause just days before the Battle of Comm. Ave. was supposed to take place.

It’s been a long road to get here, but it looks like the dates—Feb. 5 and 6—are finally set for the renewal of one of hockey’s most historic rivalries.

BC and BU sit fewer than five miles apart on Commonwealth Ave. along the MBTA’s Green Line, making the two schools the subject of hockey lore for more than a century. With the 283rd and 284th all-time meetings set for this Friday and Saturday, let’s take a look at some of the numbers behind the historic rivalry. 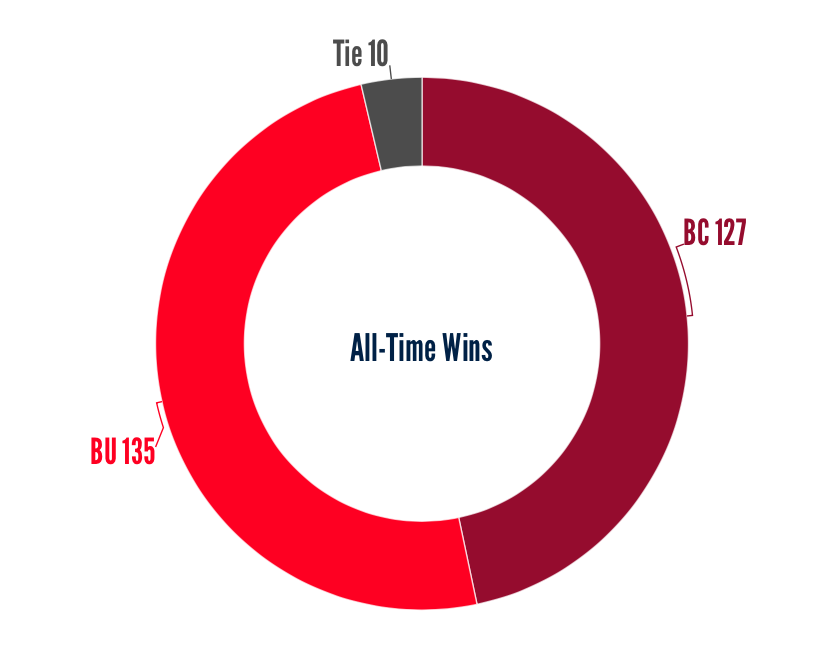 In such an unconventional year, where games are scheduled just days before they take place, both BC and BU have made the most of their time on the ice. No. 1 BC (10-2-1) took over the top spot in both the USCHO and the USA Today/USA Hockey Magazine rankings on Jan. 18 for the first time since 2015. The Eagles have been in the top five of the rankings all season long, including preseason. BU, on the other hand, got off to a slow start and didn’t open the season until Jan. 8 of this year. At that point, BC had already played six games, and four Eagles had earned medals at the IIHF World Junior Championships.

Since the Terriers’ first game this season—a 7-3 loss to then-No. 16 Providence—they have been on a tear. BU has won its last five games in a row and earned a No. 15 ranking in under one month of play.

Despite the disparity in overall rankings, BC and BU fall in relatively similar spots across individual statistic rankings. The Terriers’ 4.17 goals per game average is good for second in the NCAA, while BC sits at No. 4 in the nation with a 3.92 average. BC, however, allows just a 2.25 goals against average, while BU allows 3.17, putting the teams at 10th and 35th in the nation respectively.

Where the teams differ most significantly is in power-play success. The Eagles have struggled all season long to capitalize on a man advantage, scoring just four power-play goals on 42 attempts, good for a 9.5 percent conversion rate and No. 47 in the country. The Terriers, as they were last year, are solid on the power play, converting six of their 21 attempts for 19.4 percent and fourth in the country. 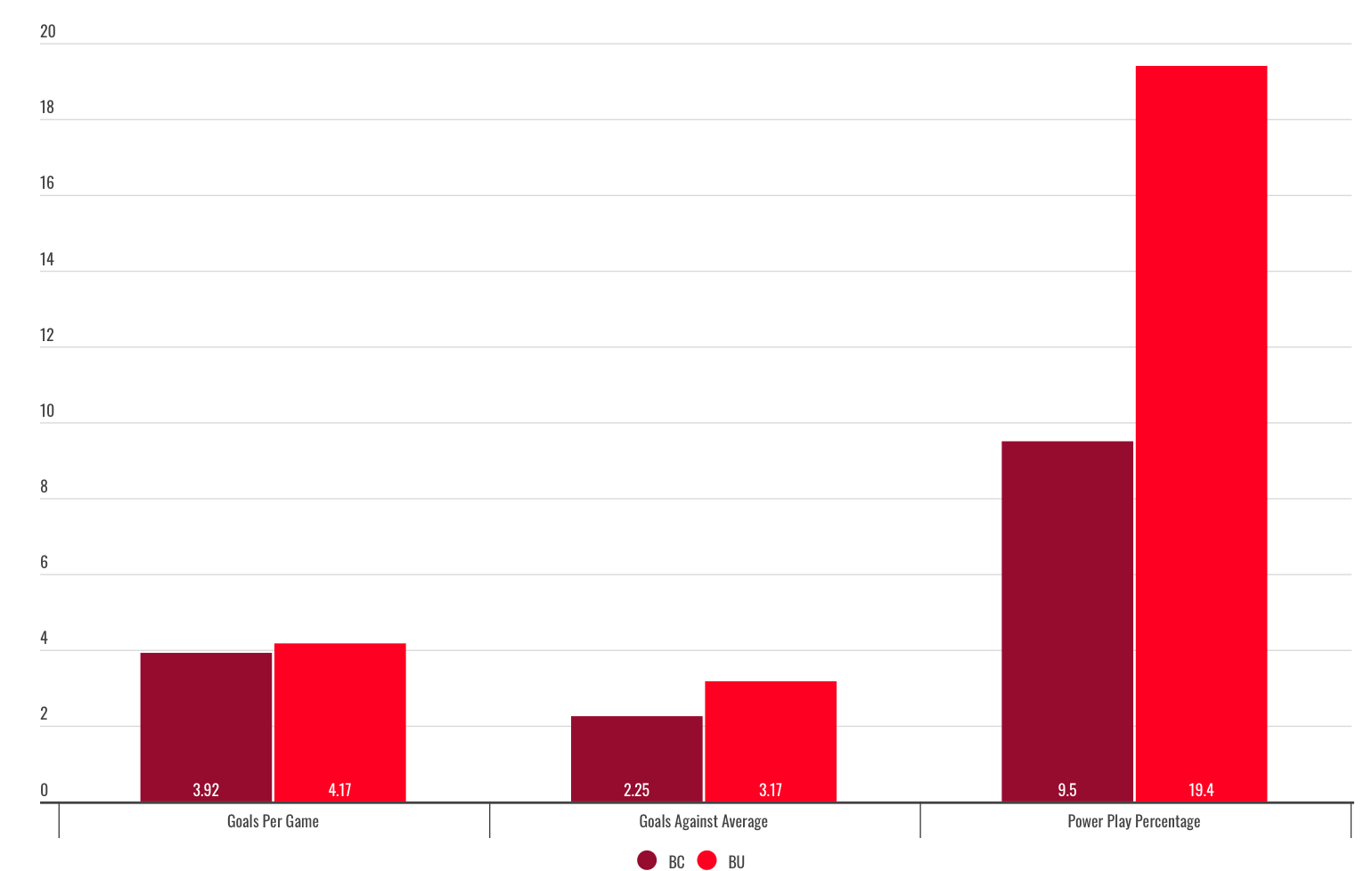 BC has been most consistently successful in shorthanded situations. In 5-on-4 or 6-on-5 play, captain Marc McLaughlin has led the charge, notching three of BC’s nation-leading six shorthanded goals. Even down a man, BC works the puck up the ice like a well-oiled machine, capitalizing on what might be inflated confidence from the opposition because of their having the man advantage.

The Eagles’ success has come in spite of some major hits to its core players, largely due to IIHF World Juniors through the month of December and into early January. Three Eagles—Matt Boldy, Drew Helleson, and Spencer Knight—won gold for Team USA, beating fellow Eagle Alex Newhook and Team Canada in the gold medal round. Their success on the international stage came at the expense of up to a month’s worth of games in BC uniforms.

Newhook missed the entire first half of the season as a result, and since returning to BC, he has struggled with an injury and appeared in one game. York said in his weekly press conference last Wednesday that Newhook—who tied with Logan Hutsko to lead the Eagles in scoring last year—is monitored daily and hadn’t been fully cleared for practice at that time. Newhook’s only appearance this season was a 4-3 loss to New Hampshire in which he notched an assist, and he has yet to record a goal. 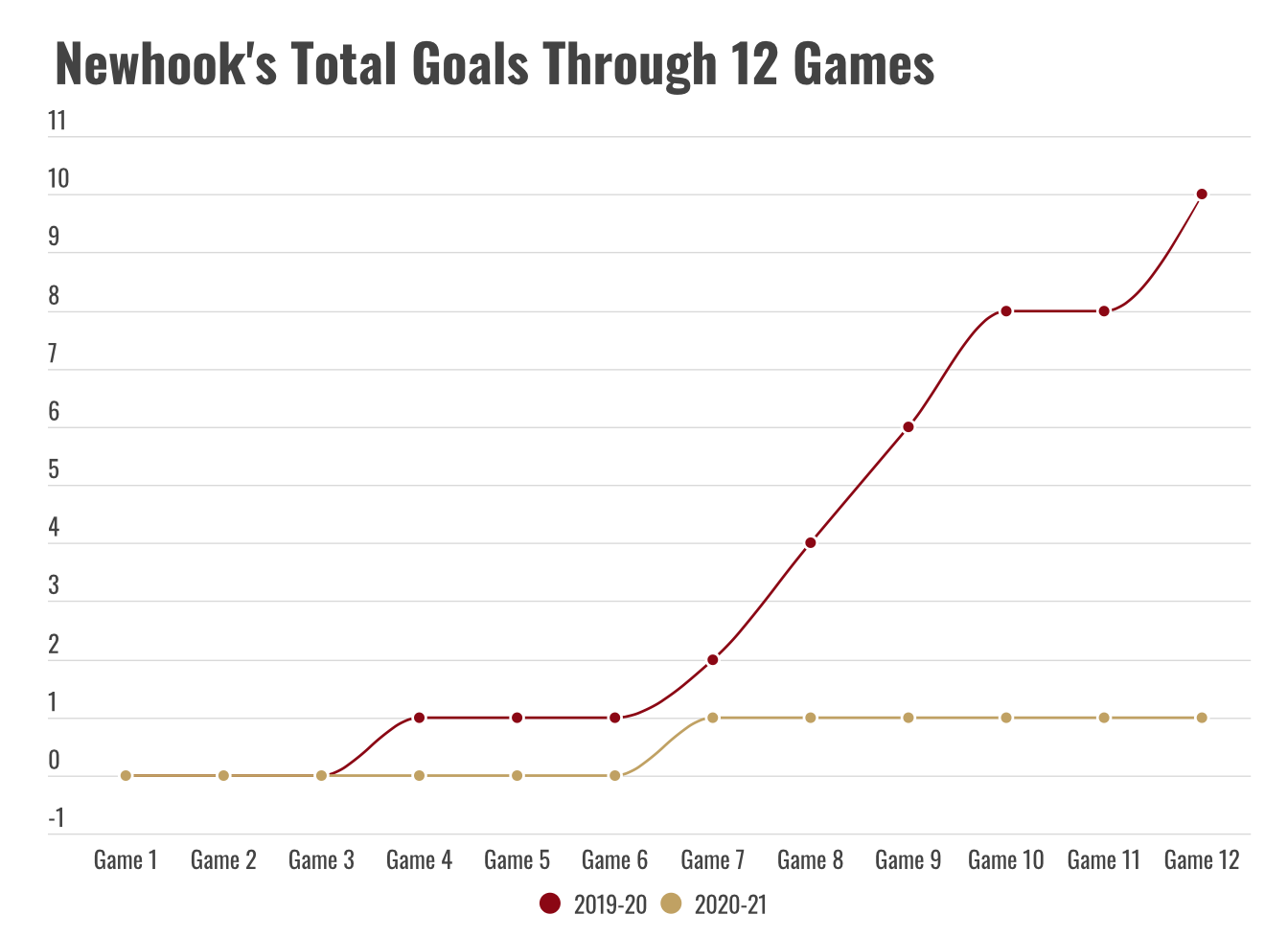 Almost one year ago—366 days, to be exact—the Comm. Ave. rivals put on their second iteration of the rivalry game of the 2019-20 season in the form of the first round of the Beanpot. What ensued was a physical, down-to-the-wire, break-Eagles’-fans-hearts kind of game, in which the Terriers came back from down 3-1 to force overtime and advance to the final on a game-winning goal from Wilmer Skoog. BU went on to lose in the final round to Northeastern, who BC defeated 10-1 just days later, resulting in somewhat of a moral victory for the Eagles.

Prior to the 2020 Beanpot, BC and BU had met once that season, resulting in a 4-3 win for the Eagles. Compared to the Beanpot matchup, the game had much less firepower, despite playing in front of a sold-out crowd and an appearance from newly appointed head football coach Jeff Hafley.

The crosstown rivals met one more time before the 2019-20 season came to a screeching halt, and with a 4-1 win over BU at Agganis Arena, BC brought home its league-leading 17th Hockey East regular season title (the Terriers, meanwhile, only have 10). 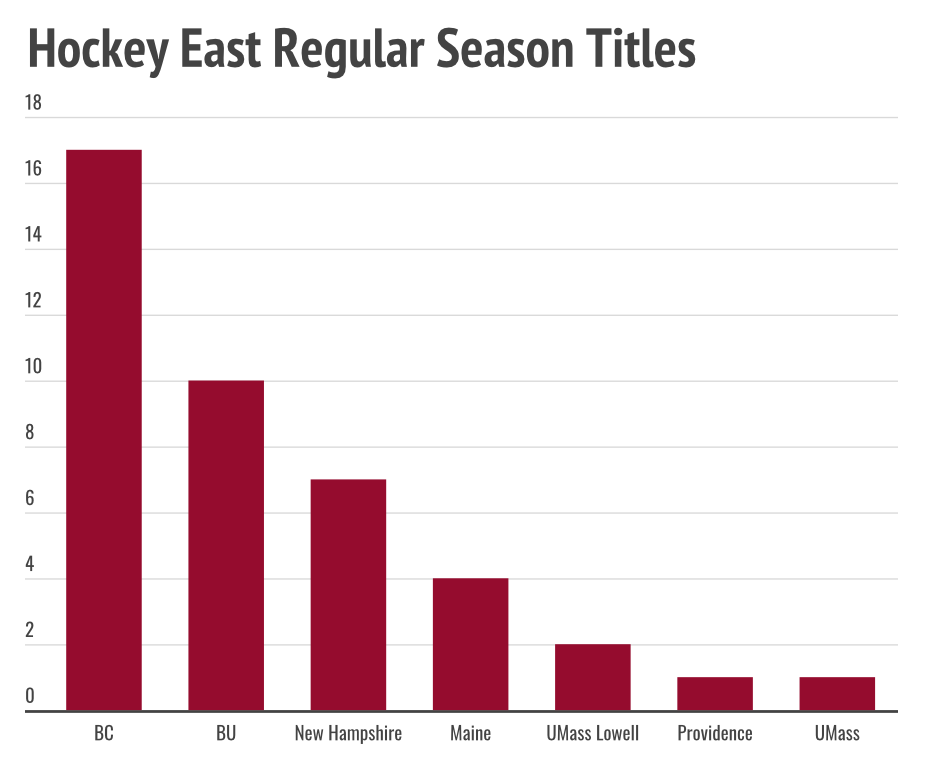