What better way to celebrate the first anniversary of quarantine than by laughing at life and watching a comedy special? And what better comedian to provide comfort than self-deprecating, yet surprisingly self-aware, comic Nate Bargatze? Bargatze just released his second Netflix stand-up special, Nate Bargatze: The Greatest Average American, which is filled with his trademark dry humor and deadpan comedic style. If you’re looking for an easy laugh at the hilarities of American life, both during and before COVID-19, Bargatze’s hour-long special is undeniably worth the watch.

Bargatze’s special takes place in front of a live, masked audience spaced apart at separate tables. The stage is set up outdoors, and the comedian performs without a mask but is socially distanced from the crowd. The camera remains on Bargatze throughout the special, discounting a couple of minor clips showing the audience.

He begins with, of course, an acknowledgment of how weird 2020 has been—a year weird enough, he points out, that the existence of U.F.O.s was confirmed and no one blinked an eye. He then informs the audience of the drive-in shows he’s been doing during the pandemic. As in many of his acts, Bargatze gives his viewers a glimpse of his life as a comedian, rife with missed flights, slightly regrettable nights, and audiences who don’t understand his jokes—sometimes because they don’t speak English.

As the special continues, Bargatze moves on to other notable aspects of life as he knows it, including taking his daughter to Chuck E. Cheese, getting claustrophobia in his 40s, and squabbling with his practical wife. Unlike other comics this past year, Bargatze doesn’t make his show all about the pandemic. Though he references and acknowledges how life is different, he more often uses it as a backdrop for jokes about life in general. Bargatze offers a subtle reprieve from reality, a strength of truly talented comedians even beyond the pandemic.

Possibly Bargatze’s greatest strength as a comic is his willingness to be the butt of his own jokes. He makes it easy for us to laugh at him. At one point, Bargatze tells viewers about his experience performing his best jokes on an audience to absolutely no avail. Bigger names like Dave Chappelle or Kevin Hart often don’t focus on their failings for comedic material. In fact, some of their jokes are based on their fame.

But Bargatze’s level of success enables self-deprecation that doesn’t feel forced or gratuitous. He simply acknowledges the fact that he has flaws, several of which include his inability to do Common Core math with his third-grade daughter and his “big, dumb eyes” that cause people to talk down to him.

Beyond his subject matter, Bargatze’s speaking style is strangely comforting. He doesn’t talk like a performer. He sometimes slurs his words together, he speaks at a regular pace, and he never raises his voice to gain attention from the audience. Listening to an hour of his calm tone is somehow mildly therapeutic. Although Bargatze would likely never describe himself as stable or set in life, his lax demeanor in the face of life’s instabilities makes his special all the more enjoyable during a time when nothing makes sense.

Bargatze also seldom reacts to his own jokes. His expressions are not stoic, but he never employs specific impressions of popular figures or loud exclamations to elicit a laugh. His calm style accentuates the strength of his jokes and his affinity for deadpan, dry wit. His special genuinely feels like listening to a funny friend.

Seemingly another result of Bargatze’s humility is his rapid style. His jokes come one after another, differing from the style of a lot of bigger comedians who often revel in the silences before their jokes. Rather than relying on this silence to build anticipation, Bargatze maintains a consistent pace while bringing dynamism to his standup routine by constantly jumping to different topics.

An unexpectedly happy accident of the show’s socially distanced, outdoor setting is the intermittent drone of helicopters overhead. Much to the delight of the audience, Bargatze uses these little events to throw in off-the-cuff jokes, proving that he has one of the best traits of a comic: the opportunistic habit of finding humor in everything.

For several years now, Bargatze has been climbing up the ranks of American comedians. The Greatest Average American adds another shining hour to his repertoire, proving his reliable talent as a comic. In an age of social media where everyone feels the need to fake it until they make it, Bargatze opens himself up to criticism and laughter, allowing his audiences to relax with him. His comedy reminds us that life is messy, and sometimes people, including ourselves, are just plain dumb. Though not everything is a joke, Bargatze tells us we don’t always have to take everything so seriously. 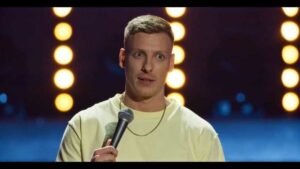