New head coaches can turn basketball programs around within just a few years, and with any luck, Boston College could be next. Scott Drew did it for Baylor, Mick Cronin did it for UCLA, and Earl Grant did it for the College of Charleston.

BC men’s basketball has not made a March Madness appearance since 2009. Since then, the Eagles have played 11 seasons under three different head coaches while missing both the NCAA Tournament and the NIT each season. The firing of Jim Christian marked—hopefully—the end of a dismal chapter in BC men’s basketball history, and as the program turns the page with Grant’s hiring, BC has the rare opportunity for a fresh start.

This year’s NCAA Tournament was a prime example of programs that have undergone rapid transformations competing among the best. To see the new head coach effect on full display, you don’t have to look any further than this season’s Final Four: Baylor, UCLA, Houston, and Gonzaga.

Neither Baylor nor UCLA were in the 2018 NCAA Tournament. Houston did make an appearance that year, but it was its first NCAA Tournament in eight seasons. Gonzaga has been a college basketball powerhouse for most of recent history, but that has not always been the case.

UCLA is the latest beneficiary of the new head coach effect. The similarities between its program and BC’s are also undeniable. Both programs have a depth of history—UCLA with the most NCAA Tournament championships in all of Division I and BC with a breadth of March Madness experience and success—but have struggled in recent years. Both programs have recently fired their head coaches in the middle of particularly bad seasons, and both schools have had Martin Jarmond serve as athletics director in the last two years.

UCLA’s comeback story starts amid the Jaylen Hands era on Dec. 31, 2018, with the firing of head coach Steve Alford. Murry Bartow served as interim head coach for the remainder of that season before Cronin was hired in April of 2019.

The 2019-20 season started out rough for the Bruins. They fared well against non-conference opponents at the very beginning of the season but began to show weakness against Pac-12 opponents. Four games into conference play, UCLA was 1-3.

UCLA’s rapid turnaround started with its next game—a low-scoring 50-40 win over UC Berkeley. From there, Cronin commanded the Bruins to wins in 10 of their next 12 games. After starting the season 1-3, UCLA finished the regular season with a conference record of 12-6.

Unfortunately for the Bruins, COVID-19 squandered their momentum, canceling the Pac-12 Tournament and derailing their suddenly realizable March Madness dreams that seemed laughable at the commencement of the season.

A year later, UCLA did it—barely. The Bruins made it into the NCAA Tournament after a play-in overtime win against Michigan State as the No. 11 seed. That win was enough for the Bruins, however, as they kept their momentum going throughout the tournament. UCLA eventually earned a Final Four appearance and was just one buzzer-beating 3-pointer away from a title game berth.

Cronin inherited a 17-16 overall UCLA team that had missed the NCAA Tournament entirely the year prior. Now, two seasons later, he led the Bruins to a 22-10 overall record, including NCAA Tournament wins against a No. 2 seed and a No. 1 seed for the second Final Four appearance by a No. 11 seed in tournament history. Had it not been for a questionable charge call and a miraculous buzzer-beater by the No. 1 team in the country, UCLA would have likely played in the national championship game.

UCLA’s rapid turnaround was miraculous, but it did not result in a national championship—at least not yet. Baylor claimed the title instead.

Like Gonzaga, Baylor is no stranger to the NCAA Tournament in recent history. The Bears have appeared in nine of the last 13 tournaments, starting with the 2007-08 season. Before then, however, Baylor’s March Madness success was almost nonexistent. Prior to 2007, the Bears had appeared in just four tournaments, the most recent being in 1988.

Baylor’s key to relevance is Drew, its head coach. In the last 18 seasons under Drew, his squad recorded 16 NCAA Tournament wins. In the 65 seasons before him, Baylor only had three. While it took Drew five seasons before making it to March Madness, getting there was a remarkable feat given what he was up against.

In 2003, Baylor’s then-head coach Dave Bliss was fired facing allegations of player compensation amid a scandal involving the murder of a former Baylor player by one of Bliss’ players at the time. The Baylor team Drew inherited was limited to seven scholarships for the first two years of his time as head coach and was barred from the postseason his first season with the team. The NCAA also barred the Bears from non-conference games during the 2005-06 season, extended the team’s probation, and limited its recruiting abilities.

Despite this adversity, Drew still managed to lead Baylor to its first NCAA Tournament appearance in 20 years in 2008. Now, still under Drew’s command, the Bears are national champions.

While BC has had some recent success, Grant has a lot on his plate. All four of BC’s 2020-21 leading scorers—Jay Heath, Wynston Tabbs, Rich Kelly, and CJ Felder—are currently in the transfer portal, and BC’s only constant over the last four seasons—Steffon Mitchell—is moving on after this year.

BC’s biggest problem, however, is the simple fact of its two conference wins last season.

Grant said he knows it will be an uphill battle and has acknowledged the program might not see success at first, but he is capable of leading BC to a fast rebuild. He has done it before, after all.

When Grant started his last job at Charleston in 2014, he inherited a team with a 6-10 conference record the season prior. In his third season, Charleston’s conference record improved to 14-4, and a year later in 2018, the Cougars made their first NCAA Tournament appearance since 1999.

Charleston is a Colonial Athletics Association  team without much historic success in sports. BC plays in the most competitive conference in the nation, the ACC, and has a sports culture backed by decades of success across the board, basketball included. The Eagles have not played in an NCAA Tournament since 2008, but they have appeared in 18 historically and have played in three Elite Eights.

Lots of Eagles have had success in the NBA, including names like Jared Dudley, Dana Barros, and John Bagley. While basketball is often treated as secondary to football and hockey, it has the potential to be big again at BC.

With rumors of new facilities and Grant’s reputation as a recruiter, immense success for BC basketball could loom closer on the horizon than expected.

Grant has voiced his optimism about a slow rebuild process, but based on other recent program turnarounds, slow might be a subjective term. A year would be fast, two would be surprising, but with some luck, Grant could have BC back in the NCAA Tournament in as little as three seasons. BC freshmen could very well see a 2-11 BC team transform into a March Madness contender before they put on their graduation caps.

As Baylor, UCLA, and this years’ entire NCAA Tournament proved, college basketball is never predictable. Teams’ luck changes every year, and losing teams can be Final Four contenders in just a few seasons.

The biggest shifts in teams’ success come with head coaching changes, and BC has just undergone a long-overdue leadership change. Though prospects might look bleak, the Eagles should be back in March Madness in no time. 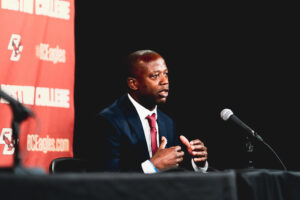