A screening of Oscar-winning film Minari and subsequent panel discussion on Oct. 7, shed light on experiences of students of Asian descent.

“What does it mean to be a part of communities?” said panelist David Kim, MCAS ’23. “Like in the movie, a lot of people try to fit in, assimilate, but I feel like it looks different for everyone. The diverse experience of what it means to be a part of [the Korean] community, I think, is something more highlighted.”

Minari is a semi-autobiographical movie surrounding a Korean American family’s new move to rural Arkansas in the 1980s. They are seemingly worn by the hardships they faced when the parents, Jacob and Monica Yi, first settled in America. The film begins with the family moving from California to a mobile home in Arkansas in hopes of starting a Korean produce farm that would capitalize on the growing populations of Koreans immigrating to the United States.

The plot follows a family who, while struggling to make ends meet, maintains and expresses their Korean culture and heritage through some playful and tragic memories on the farm.

Director Lee Isaac Chung’s Minari is a display of resilience that is not isolated from the collective experiences of many Asian immigrant families. The film emphasizes key values of familial love, tolerance, and strength in adversity that represent an ideology that many immigrants share.

Prior to its screening, international studies assistant professor Ingu Hwang, theology associate professor and Director of International Studies Erik Owens, and English professor Christina Klein spoke briefly about the film’s importance within both the independent film industry and many Korean communities across the world.

Kijun You, the consulate general of the Republic of Korea in Boston, also spoke at the screening to reflect on the growing international attention of Korean culture, including its cuisine, music, and filmmaking.

“It is indeed truly inspiring to see that, overcoming language and cultural barriers, Korean films have been widely recognized by global audiences … the film feels familiar, and yet thought-provoking [and] challenging at the same time,” You said.

With the conclusion of the film’s screening, students from the audience were able to discuss in what ways the film spoke to them and the importance of portraying Asian American experiences in mainstream American society. Panelists Kim and Daisy Wong, both MCAS ’22, shared their experiences being raised in immigrant families, from the little mannerisms that their parents and grandparents possessed to the realization of the arduous sacrifices that their family made to give them a shot at a better life.

“I found [Minari] relat[ed] a lot to my own experiences,” Wong said. “The grandma [in the film] has a very fundamental role in the family. She instilled a sense of resilience in them,” Wong said

The screening helped students reflect on shining moments and memories within the greater hardships and struggles of Asian immigrant life in America.

“As the grandmother says in the movie, minari is a leafy vegetable known for being able to thrive in places where most other plants can’t,” You said. “I believe this may be seen as a parallel. A symbol of the fact that through history, Korean immigrants thrive even in the midst of the most arduous conditions. It is a symbol of hope, and a sense of courage.” 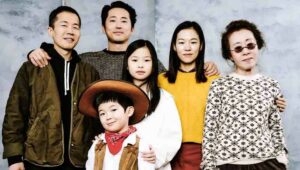