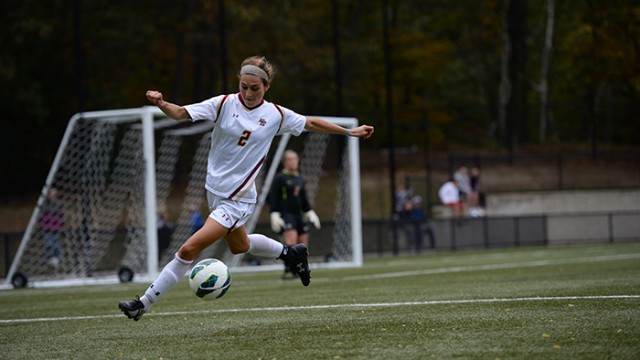 Set pieces are an enigma in soccer because a lot of goals are scored off them, but they rarely work. Some teams base their whole strategy around them, while others blow them off completely. Being able to take successful corners, throw-ins, or free kicks is a tool, though, and they come in handy when trying to break down a defense. Defending set plays is supposed to be easy. There is zonal marking, man marking, and a mix between the zone and man—similar to basketball’s box-and-one. Sometimes, though, a player loses track of their mark, a good ball is served in, and a team wins a game on a set play.

On Wednesday evening, the Boston College women’s soccer team put a few balls into the box to create chances: Coco Woeltz crossed to Stephanie McCaffrey, who shot wide, McCaffrey sent an early ball into Hayley Dowd, which went wide of the frame, and no ball into the area was more important than Lauren Bernard’s corner, which found Dowd’s head inside the six.

The sophomore finished from point-blank to give the Eagles a 1-0 advantage with 36 minutes gone. BC outshot the Huskies 5-3 in the first half, but struggled to hit the target, putting just two shots on frame.

BC started the second half strong though, as a couple of Eagles attackers made runs at the bi line looking to cut the ball back into the middle. Jana Jeffrey nearly scored when a cross trickled across an empty net, but the midfielder was unable to finish the chance, as she was shielded away by a Northeastern defender. A scramble in the box on 54 minutes saw freshman center back Allyson Swaby fail to turn and score, though the end of the move was well-defended by the Huskies. Just moments later, a corner from the home side nearly ended in Mackenzie Dowd equalizing for the Huskies, but her attempt on goal was cleared off the line by Bernard from her set position on the back post.

BC was on the back foot for the final few minutes, as the Huskies crashed the box from the right side in the 86th minute, but failed to capitalize on the opportunity which would have leveled the match close to the death. Kimberly Slade turned and shot on the half volley. Her laser of a shot had Alexandra Johnson beat, but her rip cannoned off the bar and just ahead of the goal line to preserve the Eagles’ 1-0 road victory.