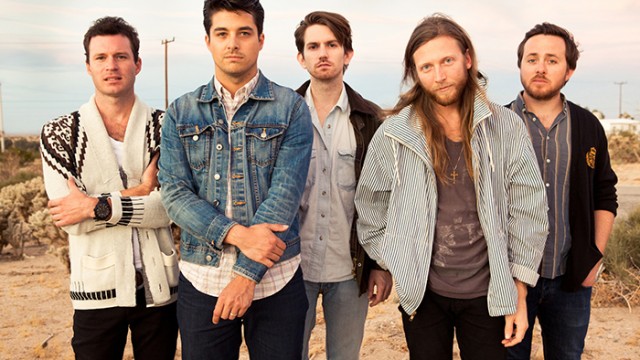 Delta Spirit’s Latest Record Is A Lovely Slice Of Americana

Delta Spirit is no stranger to the rock scene. Since 2005, the San Diego-bred quintet of indie rockers has carved out a name for itself due to the chaotic atmosphere of its live performances. The band sticks with a distinct, all-American blend of soul, blues, and rock that is as much Americana as the jukebox or the pickup truck. It is only with the release of the group’s fourth LP, Into the Wide, though, that Delta Spirit manages to capture the same vigor and grit that has made the California natives recent fan favorites at festivals like Coachella and Lollapalooza.

For an album with a title that evokes imagery of open skies and wilderness, it comes as a bit of a surprise that Into the Wide was conceived and written in a windowless, flood-ruined, cave-like room somewhere in Brooklyn in the wake of Hurricane Sandy. “That sense of feeling trapped in our studio and in the city definitely gave the album more of a weight than our previous records,” said multi-instrumentalist Kelly Winrich in a press release on the record, according to Consequence of Sound. “It played a big part in this being our moodiest recording yet.” Indeed, Into the Wide immediately captures the claustrophobia and tension of the Brooklyn apartment, and orchestrates it into a moody reflection on the nature of city life, the loss of youth, and a need to escape from both.

The means by which Delta Spirit conveys this atmosphere gives Into the Wide its appeal. What the album lacks in a polished sound, it compensates for in luscious instrumental composition and deep, straight-shooting emotionalism. “Push It,” for instance, opens the album with a hazy, guitar-driven hymn that muses on the decay of America, personified as a strong but downtrodden woman, that quickly gives way to triumphant, guitar-driven ballads (“From Now On”) and octane-fueled, stadium-worthy anthems (“Live On”). Despite the bleak origins of the album—and lyrics that, at times, border on the macabre in nature—Delta Spirit displays a remarkable mastery of instrumental composition. In contrast to its simple, potent lyrics, Into the Wide is sonically expansive and enthralling. The album as a whole sounds like a journey, which is fitting considering the record’s overarching themes of survival and endurance. It also coincides well with the surprising volume of instrumental detail put into each of Into the Wide’s 50 minutes of playtime.

All things considered, Delta Spirit’s Into the Wide is some of the band’s finest work, demonstrating its uncanny ability to straddle the sound of soaring party rock while touching on some of the most poignant recent issues of life in America. For songs that deal with heavy subject matter such as suicide, bullying, and struggle against oppression, it comes pre-packaged in an easy-to-digest format with the charisma and power to move stadiums in unison. Although there are big issues just below the surface that Delta Spirit feels are worth mentioning, the record is one that always brings with it a sense of optimism as vast as the country itself. Given the year the U.S. has had in 2014, Into the Wide is more than a great rock record—it is a portrait of a country with citizens hopeful that they might endure, move forward, and ultimately thrive.

album review rock indie
The 1975 Brings It Back To Puberty For ‘Heart Out’ Video
Catey Shaw’s ‘Human Contact,’ Plus More Singles This Week