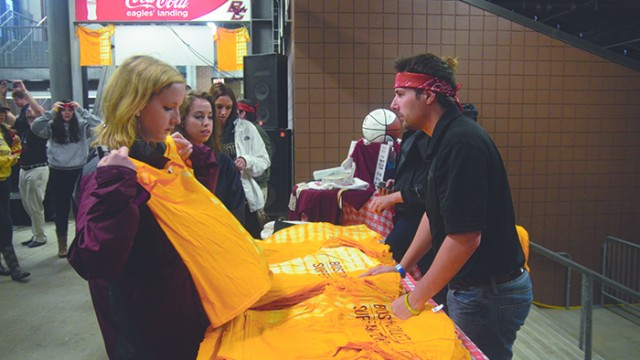 Sheltering from the sudden September downpour last Saturday evening, 791 Boston College students took advantage of the newly introduced SuperFan Zone just inside Gate A of Alumni Stadium. Boston College Athletics and the Office of Student Involvement paired up to offer pre-game entertainment to those Gold Pass-holders who had nowhere to tailgate, were looking for a little free food and music, or simply wanted to dry off before the football team’s matchup against then-No.9 University of Southern California.

The second and only other game currently scheduled to feature the Superfan Zone will be when BC takes on Clemson on October 18. After the game, the student space will be evaluated by BC Athletics to determine the logistics of its use at future games, according to Associate Athletic Director Chris Cameron. Students were also reported to have entered the Superfan Zone at the heaviest traffic rate at around 7 p.m., about half an hour prior to kickoff.

As promised in Friday’s announcement emails, the SuperFan Zone provided multiple free perks for attendees, including t-shirts, chicken wings, group photos, and red bandannas in honor of Welles Crowther, BC ’99, to whom Saturday’s game was dedicated. Students milled about as a student band, Free Alley, played covers including “Pumped Up Kicks” and “Shipping Up To Boston.” A raffle was also set up to distribute other, larger prizes, and men’s hockey head coach Jerry York showed up for a short time to take pictures with fans. Those who showed up to the SuperFan Zone between 5:30 and 7:30 p.m. and checked in on the Gold Pass app received 10 extra points.

Unusually high foot traffic contributed to a highly congested Shea Field as well, prohibiting entry for a large portion of students without wristbands—a measure implemented this year to ensure a minimum number of tailgaters are permitted entry onto Shea before capacity is reached.

“Two entry lines have been established this year following new rules for access to Shea Field,” said BC Chief of Police John King in an email. “More people showed up than we could allow, keeping public safety concerns as the most important objective. Several thousand walk-ons were allowed on Shea Field.”

According to King, ticketholders attemtping to walk onto Shea prior to 5:30 p.m. queued up near the home-plate side of the field.

“The usual process is to hold walk-ons for a period of time to allow cars to park thereby avoiding the potential conflict between people and vehicles,” King said. “We monitored field congestion and allowed walk-ons in phases with public safety being our primary concern.” 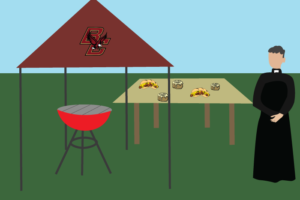