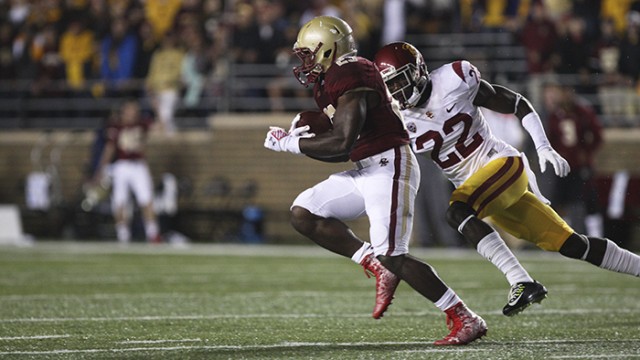 The forecast did not look good for Saturday, but rain and predicted defeat were held off. The football game against USC was not only exciting and moving, but significant in that it was the first time since 2002 that Boston College has beaten a top-10 team while being unranked itself—a rare occurrence in the history of the game.

This is the sixth time BC has accomplished this feat, the last time being in 2002 against an undefeated and No. 4-ranked Notre Dame in South Bend. This glorious win in the “Holy War” was attributed to the defense, which “made up for the offensive ineffectiveness,” according to reporter Jake Berry.

Unlike the USC game, it was relatively low-scoring, with a final score of 14-7, but just as full of un-sportsman-like (yet accurate) jeers of “overrated” according to Allie Weiskopf, who traveled to South Bend in 2002 according to the Nov. 5 issue of The Heights that year.

This win brought back memories of BC’s win against the same team in 1993, perhaps even more surprising and impressive, considering Notre Dame was ranked No. 1 then. The Eagles won with a last-minute field goal, and not strong defense, but risk-taking was what “simply outduked #1 ranked Notre Dame to the tune of 477 yards total offense and an in-your-face style of play heretofore unparalleled by a visiting team at South Bend this season,” according to Paul Canalori in the Nov. 22, 1993 issue of The Heights.

Besides beating the Irish, BC has been known to upset the status quo as far back as 1940, a highly successful year for the BC football team as it won the Sugar Bowl that year. A picture with the caption, “Entire student body welcomes team bringing Tulane scalp home” in the Oct. 4, 1940 issue, expressed the excitement felt after defeating a highly regarded team that was even praised by the players. Even without seeing televised coverage of the game to create hype, the Oct. 4 issue reported, “for a time it appeared as if the celebration would get out of control as the enthusiastic students surrounded the fire truck and sound truck, singing ‘For Boston,’ and shattering the calm atmosphere of the campus with deafening cheers,” until there was an announcement that classes would begin on time.

This was the kind of crowd that would have stormed the field had it been a home game. The next upset that year came a few weeks later when BC faced Georgetown. Although it may be hard to believe that the Hoyas were once a formidable threat, back in 1940 they were undefeated before losing to the Eagles. After that impressive defeat, BC won against longtime rival Holy Cross 7-0 in a gridlock game in which BC only scored during the last quarter. The victory was the first predicted by the then-coach Frank Leahy, who was typically pessimistic about his team’s upcoming performances.

Spurred on by a series of wins, the team won 19-18 thanks to iconic “Chuckin’” Charlie O’Rourke, the famous BC quarterback. Ten wins preceded BC’s game against Tennessee, a worthy match for the Eagles that year, on New Years Day. Not referring to USC, the Eagles “fought like Trojans though they could hardly stand up on their feet,” according to the Jan. 15th issue of The Heights that also said players were getting sick to their stomachs due to the heat, but the team eventually won, allegedly because the players were “a bunch of fellows who had a lot of spirit.

“They didn’t want to let their school or their friends down so they just went out and played football even though half of them were on one leg.” The only regret the players probably had was that more of their classmates and alumni weren’t at the game in New Orleans. Had they been there, they would have witnessed star O’Rourke running a 24-yard touchdown.

In terms of upsets within games, Doug Flutie’s iconic “Hail Mary” pass is an example of why Super Fans may not want to leave the stadium until the end of the game. A close game like that one, which proves a challenge is more gratifying than an easy blowout, while demonstrating strength, does not necessarily show finesse. In some ways, the most exciting moment of a game is when the tables turn.

The importance of spirit cannot be underestimated—as the Eagles’ wins began to mount in 1940, so, too, did the infectious school-wide excitement. Win or not, throughout the years Superfans have been loyal to the team that has experienced dramatic ups and downs.