Home » Rediscovering Chris Herren: The Star BC Lost And The Kid It Forgot 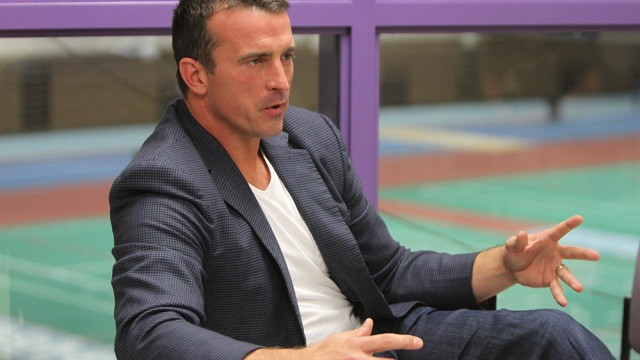 Rediscovering Chris Herren: The Star BC Lost And The Kid It Forgot

The Former BC Basketball Player Talks About His Confusing, Difficult Time On Campus

May 1, 1995: When Chris Herren came to BC, everyone expected great things. But after only one game in a BC uniform, his career here is apparently over … A lot has been speculated, and much has been written about the situation. But the bottom line is that Chris Herren missed an opportunity, and he will be fortunate to get another.

It’s the first day of fall, Sept. 23, 2014. A hint of autumnal crispness marks the air, but the lingering humidity of late summer is securely trapped inside the Reggie Lewis Track and Athletic Center in Roxbury, M.A. In front of a set of bleachers filled with 300 football-jersey sporting, junior-high kids from some of the roughest neighborhoods in Boston, Chris Herren is in his element.

Turning to his left and right, Herren makes eye contact with every corner of his audience. Then, after a long pause, he asks, “What is it about me on Friday and Saturday nights that I have to change myself?”

Over the last four years, Herren has told his story and posed a question like this to more than 500,000 kids. The middle schoolers in front of him now are part of Boston’s Play Ball! Foundation, and just like every other group of kids Herren’s stood in front of, he does his best to save them from a nightmare by sharing his own.

His tale is one of throat-welling desperation and eventual, incredible salvation, and despite his tragic link to BC, most students have never even heard of Herren.

Nov. 15, 1993: Boston College basketball arrived on the national scene Wednesday, on what has been called coach Jim O’Brien’s most important day here at BC. With the signing of The Boston Globe’s Division 1 player of the year, Chris Herren, O’Brien and his staff have put together one of the top five early-signing recruiting groups in the nation.

About three years ago, ESPN Films chronicled Herren’s story in the 30 for 30 Unguarded. Equal parts horrifying and inspiring, Unguarded details Herren’s journey from star high school basketball player, to prized recruit, to drug-addicted pro, to heroin junkie, to the motivational speaker he is today.

Nov. 14, 1994: The one exception in the group may be 1994 McDonald’s All-American point guard Chris Herren out of Durfee High in Fall River, MA, who may just end up being the Eagles’ point guard for the next four years.

He was featured on a Sports Illustrated spread and thrown out of BC. Herren starred at Fresno State, and checked into rehab during his junior season. He married his childhood sweetheart and became a father. The Nuggets drafted him 33rd overall in the 1999 NBA Draft before trading him to the Boston Celtics, at which point he became addicted to Oxycontin. After getting injured, the Celtics cut him and he embarked on a career as an international journeyman, falling deep into the darkness of a heroin addiction. Switching to needles over time, he shot up for six years, overdosing and dying for 30 seconds on June 4, 2008. Herren collected seven felonies. He spent every single dollar he made from basketball on drugs, and pawned anything he could find in his house. He overdosed four times in total. And yet, somehow, Herren climbed out of the abyss. On August 1, 2008, he got sober.

For one of the most incredible stories to ever reside—albeit very briefly—on Lower Campus, Herren’s anonymity among BC’s collective consciousness is utterly astonishing. If Herren’s story ended with his terrible spiral into drug and alcohol addiction, forgetting him would be less remarkable—that tale’s been told a thousand times. But it didn’t end there, and a defining part of it began at BC.

Back in high school, Herren drank alcohol, popped some medicine-cabinet painkillers with his friends, and smoked marijuana. Shortly after beginning his career in Chestnut Hill, Herren tried cocaine for the first time in a BC dorm room. He sat down at a table, snorted a line with a dollar bill, and became an addict. Instantly, Herren was flying down a whole new, entirely sinister path, with a paralyzing inability to slow his descent. His problems snowballed quickly. In his first and only game as an Eagle in Conte Forum, Herren excelled—putting up 14 points in 21 minutes. Then he fell, breaking his wrist. He knew he was in trouble. Three failed drug tests later, Herren was done at BC.

Dec. 5, 1994: Boston College men’s basketball was dealt a severe blow last week when it was announced that freshman guard Chris Herren will miss the rest of the season. Herren, the heralded guard from, Fall River, MA, will undergo surgery tomorrow to repair ligament damage to his left wrist, according to an announcement by BC head coach Jim O’Brien.

Taking a seat and laughing, Herren shakes my hand and jokingly asks if this interview doubles as a peace offering with BC. It is. At a fit 6-foot-2, 195 lbs, Herren is a bit bigger than he was as an 18-year-old freshman—but given the pharmaceutical hell his body was subjected to, the resemblance to the old photos is striking. Wearing jeans, a white v-neck, and a blue and black blazer, Herren leans back in his chair. I tell him I want to talk about his time at BC, and his face becomes more solemn—he’s told these stories countless times before, but the memories remain painful.

The Heights: Would you mind talking about your BC time at all? I know you’ve probably talked about it a lot, obviously­—but if you wouldn’t mind just kind of telling me what that was like, going back to then.

Herren: Confusing. I wasn’t ready at 18 years old to accept the responsibility of being a big-time college basketball player and being a college student at the same time. It was extremely hard being local and rooted in this area and staying focused at the same time. I had a lot of outside influence around me back then.

The Heights: Out of curiosity, where did you live on campus?

Herren: I was supposed to live in a freshman dorm on Upper Campus, and I walked into my dorm room and [my roommate], who was a Canadian scholarship athlete, had life-sized pictures of The Crow on the wall. So I checked out and got a single across from the new cafeteria.

The Heights: On Lower?

Herren: On Lower Campus. But I spent most of my nights in Edmond’s on the first floor, corner window.

The Heights: I’ve seen Unguarded and I thought it was extremely inspirational—so I guess that’s when things really started to get out of control. What was your relationship like with Dick Kelley at that time?

Herren: Dick Kelley was way more than a SID. He was concerned about my wellbeing more so than my ability. We had many, many meetings in his room, in his office, where we discussed the issues. As I said in articles—he was one of the first people I called when I celebrated a year sober. Because he was one of the first people that understood how hard my addiction was. He was right there on the front lines with me in the beginning.

The Heights: Other than breaking your wrist, what do you remember from that first game, that single game?

Herren: You know, it was a blur to me. People told me the stats, but I don’t remember scoring, I don’t remember any of that stuff. Any time you come from Durfee High School, playing in front of that many people, you’re Massachusetts Player Of The Year three years, you’re a McDonald’s All American, and now it’s time to put up or shut up on the big stage—the emotions were through the roof. I remember the injury. I remember falling that night, and knowing that this was probably going to be the end of it.

The Heights: You could tell with that much certainty, at that point?

Herren: You know honestly, I think back then it was pretty uncommon. It wasn’t as much of an issue as it is today, so when it happened, a lot of people didn’t know how to really handle it, as well as myself and the staff at BC. The trainers tried tremendously to help me. I just wasn’t ready, I mean it was not gonna happen. I don’t remember the exact way they took care of it. We’re talking 20 years ago, and a lot happened in them 20 years, my man, you know what I mean? My memory’s shot, my back’s shot, brother. But, you know, I think we all could have handled it better. I know I could have.

Do I think BC could have handled it differently? Absolutely. Do I think if it was 2014—I think it would have been addressed a little differently. Drug addiction in athletics—and it still is to a certain extent—is treated very punitively. We punish, we punish, we punish. We suspend, we suspend, we suspend—rather than, why not treat? Why not treat? We send these athletes away to these centers, out of their element, for 30 days, and then we throw them right back on to a college campus and say, “stay sober.” Like, did you stay sober at Boston College?

Herren: Right. You know what I mean? It’s the hardest place to ask somebody—anybody—to go spend four years of your life on a college campus and don’t drink alcohol. And don’t do drugs. I mean, it’s difficult. Especially for someone like me, it was a very difficult thing to try to do.

The Heights: And I guess especially when basketball’s out of the equation—I’m sure you had a lot of free time, obviously.

Herren: I broke my wrist, which was a nightmare. But I didn’t handle it right. I’d walked into BC with a chip on my shoulder, with an air of cockiness that helped me on the court but was not going to help me in the culture. And just living on Edmond’s as a freshman, living in Edmond’s as a freshman—big mistake. I remember playing Wiffle Ball in the Mods, and people walking by saying, ‘Dude, don’t you have class?’ And I’m like, ‘No, I’m playing Wiffle Ball.’ But, like, the Mods are seniors getting ready to graduate. And I’m like starting off my college career learning how to throw to hit the corner of the chair in the Mods. You know what I mean? That’s a bad start. But I love the Mods.

The Heights: I think everybody does.

Editor’s Note: This interview has been condensed and edited for clarity. 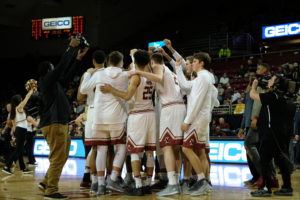