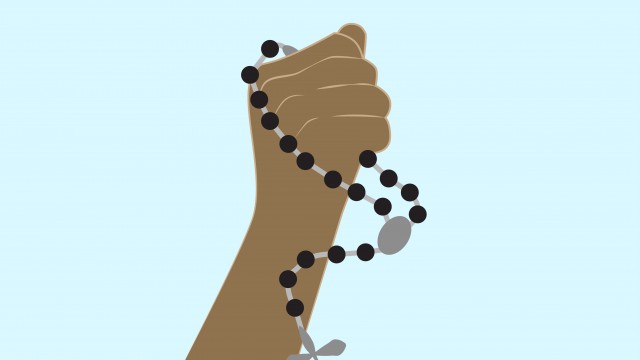 It’s the massage-chair-lava-lamp package deal you bought on Black Friday. It offers you a defined place in the world, protects, and distracts you from the harshness therein, and teaches you not to question the sentience of its fluorescent globs—there is an order to the movement of the globs. There must be. It just isn’t for you to know. In your massage chair, you know you are special. Religion cushions our lives with the assurance that we are the apex of creation, a conscious decision rather than quantum coincidence.

And that’s all very fine and good, but in order to access that comfort, a great deal of suspended disbelief—commonly known as “faith”—is required. Perhaps evident from my flippant analogy, I’ve yet to find that faith. I’ve found logic in philosophy, love in friendship, emotion in my bi-semester stumblings for a real relationship, but where is the indisputable source of faith? To those who point to religious texts, I say, “Stop that, stop pointing,” for the impact of any set of words corresponds directly with one’s disposition to seriously consider them. It seems rather a catch-22, that to gain faith one must go to the Bible, and yet to go to the Bible one must already have at least a modicum of faith. And yes, I would argue that a certain predilection is necessary: How are we to separate fairytale from scripture when the physical laws of the universe bar either from the realm of possibility? Without the predisposition of faith, or the inherent holiness of the words and stories so described, we cannot.

Certainly, my faith is not unshakable—in fact, it more resembles a maraca that only ceases to shake when good times fade into the horizon and disappear beneath life’s responsibilities. No, I am not religiously disposed, although I was raised Presbyterian. But, like any minimalist Christian, I saunter into church every Christmas and Easter to a loaded “So nice to see you,” from the minister. Lovely to see you too.

During my confirmation process, I set a personal record for most consecutive attendances at church, and once I was confirmed, I took that as my cue to enter into the lackadaisical sect of Christianity known as the “Chreasters”: not true fans of the whole discography, but willing to shell out some time every holiday season for the greatest hits.

I was taught the Bible my freshman year of college by a Jewish man who was not a man of any sort of cloth, aside from some poorly-kept, wrinkled polos. He wasn’t embittered­—he simply had a general sense of being flabbergasted by what he was reading. He was a man of logic and accepted his fate as an atheist, stating, “Well, if there’s no God, there really is no reason to live, or meaning to life for that matter. But does there need to be?” I found this somewhat comforting, in an admittedly uneasy way.

But teleology is hard, so let’s get back to logic, because I am running out of topics. What religion is the most logical to follow, or disavow? While it seems widely accepted that atheists can, and indeed do, claim ownership of logic in religious realm, they really cannot. The stereotypical atheist sees the world as too unjust for there to exist a God of Christian goodness, and consequently he refuses to believe in the frightening alternative of a capricious governing entity (which, by the way, sounds an awful lot like a human). After all, who wants to be governed by a dictator, benevolent or evil? Certainly not the Western world. If an atheistic President is ever elected, I will be thoroughly disappointed if we don’t start quibbling about Weapons of mass Divinity and arranging drone strikes on the Heavens. Just as a precaution, of course. Can’t be too careful.

Unfortunately, atheism’s rejection of a just God doesn’t quite hold up because it attacks the problem the wrong way. It mistakenly anthropomorphizes God by assuming that He is just a more powerful version of us: One who can be everywhere, see everything, and do whatever He wants. “Ah ha!” they triumphantly cry. “Can God make something so large even He can’t move it?” But, this assumes that God is constrained by human logic. Maybe He operates under something higher than logos, or perhaps is unadulterated reason. Truly, He could be nothing like us. We are made in His image, but anyone familiar with Plato’s Cave, or art in general, understands that the image is always lacking. The two-dimensional self-portrait is not the three-dimensional artist.

Weighted down by all of this mystery, it seems rather haughty to claim existence or non-existence, which is why to the agnostics go the spoils. Detractors of agnosticism brand it weak and indecisive. “Make a decision, pick a side!” they shout, to which I reply, “Pretend to know!” It’s all very productive.

Undoubtedly, it is better to acknowledge ignorance than to disguise it as knowledge, but Christianity and atheism alike believe definitively in God’s (non) existence out of a desire to be right, comforted, or both. Conversely, agnostics are only certain that they really don’t know anything. Wouldn’t Socrates be proud?

With respect for the long run, the answer is less clear. We’re on this Earth for a cosmic second, and it’d sure be nice to secure some guarantee for whatever comes next. Just close your eyes, throw the dart, and adopt whatever religion you just hit, just to be safe. Yet as fun as religion roulette is, if God does exist as defined in the Bible, a mercenary adoption of religion probably doesn’t count. It’s kind of cheating. But really, if you see any worth at all in agnosticism, I fear for your relationship with God.

What I’m saying is this: If this argument has at all taken root in your mind, and you consider yourself even slightly of the same bent as that hemlock-drinking philosopher, you might as well nurture the seed, let it bloom, and eat of its fruit, because you’ve already fallen too far down the stark pit of rationalism to feel the soft light of religion without also noting its uncomfortable itch.  What I’m saying is that you’ve already watched Avatar on your friend’s 70-inch LED screen, you can’t go back to your blocky, proletariat television now. What I’m saying is, if you’re at all like me: You’re religiously screwed.