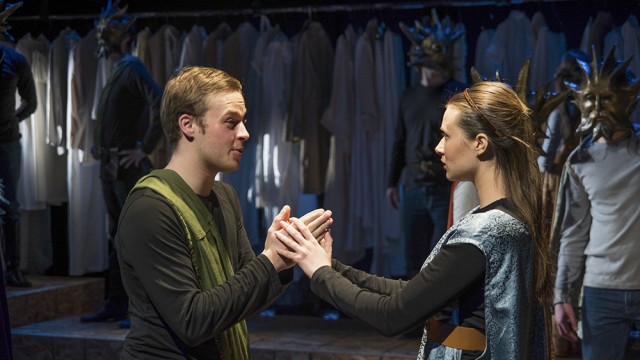 hakespeare works. It worked a couple hundred years ago, and it works today in varying effectiveness. From London’s Globe Theater to city parks, the plays still work wherever you stage them. Romeo and Juliet speaks to teenagers now as it surely did a long time ago, much as the racial tensions in Othello were relevant during Shakespeare’s writing as they are now.

A product of a semester-long Shakespeare acting course taught and directed by Tina Packer, Honor, Shame, and Violence, put on by the Boston College theater department in the Bonn Studio banks on this continued relevancy. In fact, they hinge the entire performance on this relevancy, with members of the show continually hopping up on platforms on either side of the stage to explain the relevance of the play today.

The notes the performance adds through the drama are helpful and—because of most college students don’t have a strong memory of their high school English classes—maybe even necessary. They act as a live No Fear Shakespeare.

Honor, Shame, and Violence takes a risk, though. Any old Shakespeare play will work if done with competence. But a combination of the old and news relies on the right composition, and a setting that will work as an alternative Verona, Rome, Venice, or England. Though the show is hosted in the smaller, more intimate Bonn, the stage is fairly traditional. It takes inspiration from the traditional structure of Shakespeare’s theater with a gold, cobbled floor and stocky pillars that help frame the stage. It faces the audience straight on without any frills and lays the action bare at the audience’s feet.

The show moves from Henry IV Part 1, to Othello, to lesser known Coriolanus, and finally to Romeo and Juliet. With each move comes an explanation on why this particular show and these particular scenes are relevant for us today. Henry IV is connected to the dangers of righteous crusade resulting in the current unrest in the Middle east. Othello is connected to violence against women as seen in the NFL Ray Rice case, and Coriolanus is thrown together with the onset of drone warfare and the casual way humans are killed in modern war.

Finally, the show proposes Romeo and Juliet as some sort of answer to this madness of honor, shame, and violence—that Shakespeare is about honor, shame, violence, and love. All the problems we have seen in the previous scenes are again raised in Romeo and Juliet, but the show offers their desperate love as the only thing that can heal these contentious divisions. The funnest part of the play is watching the cast roll from one role to the next without a hitch. Matt Appleby, A&S ’15, plays the burly Othello, and also stars as a Roman woman in the next section. Aryn Mellow Pryor, A&S ’16, plays the virtuous Desdemona of Othello, only to reappear as a boy in Coriolanus. For Romeo and Juliet, Will Krom, A&S ’16, and Micheila Jacobson, A&S ’17, appear out of nowhere, and in the space of a few scenes carry the audience threw the rough emotional waters of the play.

The set and atmosphere carry a smooth variance. The lighting is especially startling in the first section as Henry the crowned prince kills his rival Henry “Hotspur” Percy. His death scene is a particularly intimate moment between the crowned prince played by David Makransky, A&S ’17, and his felled foe and rival played by Joe Meade, A&S ’15. The lighting also takes on noir, shadowed elements during many of the confrontations in Othello, while reverting to a bright blaze for the battles in Coriolanus. In what was the best lit and most striking atmosphere in the show was the masked ball scene in Romeo and Juliet. The lights seemed to perfectly mirror moonlight, as if it were coming straight through the ceiling.

If there’s a disappointing aspect to the show, it is the need the show feels to do the interpretive work for the audience, even as the actors laid themselves bare to convey the emotion of the Bard’s work. The structure of the play worked, and it would have worked without the reminder that Bush too went on his own crusade, that Ray Rice knocked out his wife, that Romeo and Juliet is about love. The thing about Shakespeare is that sometimes it is best to let him do most of the talking. He has proven he’s pretty good at it.

Honor, Shame and Violence runs Wednesday, Jan. 22 through Sunday, Jan. 25 in the Bonn Studio Theater. Tickets are available through the Robsham Box Office.

shakespeare theater
‘Selma’ And The Art Of Truth
Meaghan Trainor’s ‘Lips Are Movin’, Ne-Yo, And More Singles This Week