Home » ‘Selma’ And The Art Of Truth 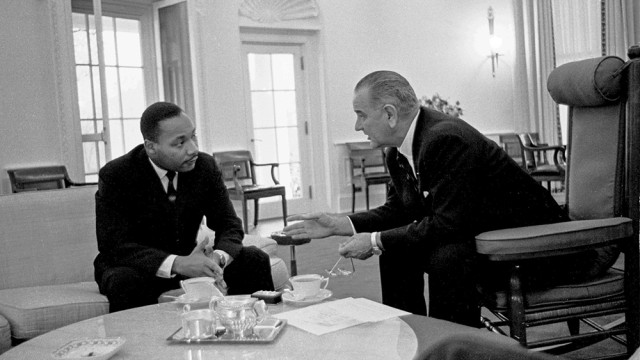 ‘Selma’ And The Art Of Truth

NYT columnist Maureen Dowd’s critique of  how ‘Selma’ depicts Lyndon B. Johnson is a misinterpretation of how all films approach truth.

I’m usually quite proud of my last name. It’s Gaelic and roughly means “dark”—most likely in reference to hair. Dowd appears occasionally but not often: not like other Irish names like Doyle, McGrath, or O’Brien. If you happen to miss my little byline, you’ll often find “Dowd” in the sports section in much bigger print than my credit. Soccer star Hayley Dowd (of no immediate though possibly long lost relation) is the one scoring the goals, after all.

This is all fodder for my introduction of a certain Maureen Dowd—an Op-Ed columnist for The New York Times. If you Google “Dowd,” she’s the first of us to appear. Though if you search “Dowd, The Heights,” I’m the first to appear, right above another article about Hayley Dowd. Proof you do, in fact, win some.

Last Saturday, Maureen Dowd took on Selma. It’s her job to take on things—she’s a columnist. But she took on more than Selma in the Saturday edition: she took on arts.

She doesn’t start well, opening her column by describing how she “found [herself] watching it in a theater full of black teenagers.” Her frankness is commendable, though reeks of superiority. She goes on to argue that “artful falsehood is more dangerous than artless falsehood, because fewer people will see it.” She agrees unequivocally with pretty much everyone else that Selma is a great film, though she disagrees with director Ava DuVernay’s depiction of Lyndon B. Johnson, who she affectionately refers to simply as L.B.J., for short. By painting L.B.J. as a curmudgeonly, patronizing figure in the film, DuVernay has distorted history for these black teenagers in the audience, said Dowd. She’s performed falsehood. But arts always wins.

Maureen Dowd wholeheartedly believes that she, in fact, has the true story—that M.L.K. and L.B.J. worked in tandem to forge the Civil Rights Act of 1964. And I’m sure there is some fabrication in DuVernay’s take on the matter, just like there’s some serious fabrication in The Imitation Game, or The Theory of Everything, or Foxcatcher—pretty much any serious movie about serious people that came out this year except Boyhood, whose entire premise, goal, and crowning achievement was capturing life (growing up) as is.

Like all the other arts, films try to convey a truth. A professor once explained that under all the layers a film might have, a film carries a little kernel of truth. That truth might be as simple as “only love can thaw a broken heart.” And that movie would be Frozen. That truth could be the meditation Stanley Kubrick made on humanity in 2001: A Space Odyssey that I’ll never fully understand and in which case the kernel has become some massive, bean stock type structure.

Regardless of the physical or evolutionary state of the kernel, the little truth films are there to convey a truth, not the Truth as Maureen Dowd would have it. She says that “the truth is dramatic and fascinating enough.” She strives to measure films by their historical accuracy.

I don’t have the word count to get into objective versus subjective truth here for my more esteemed counterpart. Truth (in the capital T sense) is for journalistic endeavors—reports, features, or even a documentary. Films don’t deal in Truth—they deal in truths or at least the good ones do. And those little truths may build up to some higher truth, but it’s a truth of (for lack of an admittedly less dramatic phrase) human experience, not of what exactly happened in such and such a place (this, that, and the thing).
If you want clean cut delivery of Truth, read a history book. If you want a good story that maybe even gives your life some meaning it didn’t already have, go watch a good movie. Watch Selma.