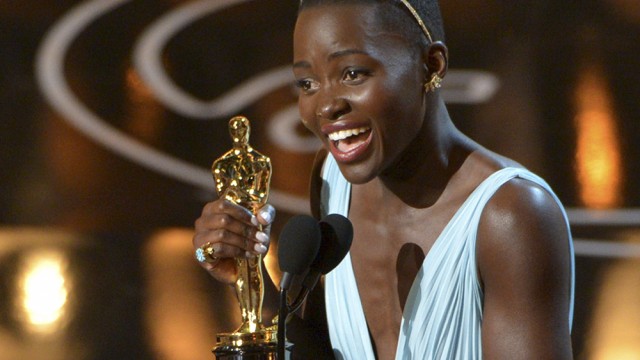 The 2014 Oscars awarded a diverse year in film.

12 Years a Slave had a particularly strong showing at the ceremony. Lupita Nyong’o tearfully accepted the Best Supporting Actress award for her debut role. Steve McQueen became the first black filmmaker to direct a Best Picture winner and 12 Years a Slave earned nine nominations total, taking home three awards. For a fleeting moment, it seemed Hollywood was working toward fixing its diversity problem.

And maybe we had spoken too soon.

The Academy of Motion Picture Arts and Sciences unveiled the 87th Oscar nominations last Thursday, amidst criticism that the Academy had failed to recognize any actors of color. In fact, this year’s Oscars race is the whitest since the 70th Academy Awards in 1998, with no female directors, screenwriters, or cinematographers on the nominations list and no actors or actresses of color. While 2014 was a banner year for Oscar recognition, with Mandela and Captain Phillips up for multiple awards, this year’s Oscar nominations seem to be taking a step backwards. The glaring lack of diversity caused social media to erupt with the hashtag #OscarsSoWhite as the top trending topic on Twitter, indicating this year’s Oscars may be the worst for diversity in recent history.

Among its most egregious snubs, Selma, centered on the life of Dr. Martin Luther King Jr. and his struggle for racial equality, was shut out of several major categories. Golden Globe-nominated director Ava DuVernay would have been the first African-American female to be included in the Best Director category had she received the nomination. Leading actor David Oyelowo also failed to pick up a Best Actor nomination, despite his highly-touted and critically-acclaimed performance as Dr. King. Selma, however, did manage to earn two nominations for Best Picture and Best Original Song so all recognition for the film may not be lost.

The large diversity gap in Academy Award nominees comes as no surprise to those familiar with the entertainment industry. A 2012 Los Angeles Times study found that the composition of Academy voters was markedly less diverse than the movie-going public. Oscar voters were found to be 94 percent white and 77 percent male, with the median age of voters at 62 years old. The academy’s executive branch, by that same token, is 98 percent white and 90 percent male. Mirroring the hiring patterns in Hollywood, female directors and writers are often underrepresented in their respective categories. Gillian Flynn was shut out of the Best Adapted Screenplay category despite Gone Girl receiving critical acclaim and a nomination for its leading actress, Rosamund Pike. Similarly, only seven percent of Best Actor winners were people of color. Halle Berry is the only person of color that has been awarded the Best Actress title for her 2002 role in Monster’s Ball.

In another facet of Oscar controversy, the release of Selma has been met with backlash for its depiction of President Johnson as a political obstacle to Dr. King’s iconic march for civil rights, led from Selma to Washington D.C. in 1965. Although Selma is not the first film to come under fire for its historical inaccuracies, the film is notable for its portrayal of racial injustice through the lens of black leadership. By denouncing DuVernay for the film’s unsympathetic rendering of Johnson, critics have provoked negative response both from the public and the director herself. Criticism of Selma has been derided as catering to the “white savior” narrative while DuVernay has responded to criticism with the statement, “I’m not a historian. I’m a storyteller.” Despite the film’s backlash, Selma received universal acclaim and holds a 99 percent rating on Rotten Tomatoes and a score of 89 on Metacritic.

So how can award ceremonies become more representative of women and people of color while recognizing cinematic achievement? In regards to Selma, the brunt of the blame has been placed on Paramount for sending screeners of the film to voters too late. Likewise, hiring practices in the Academy have made great strides by electing Cheryl Isaacs as the first African-American female president, but AMPAS still has ways to go in terms of diversifying membership. Closing Hollywood’s diversity gap begins by greenlighting more films directed and led by women and people of color while expanding the academy’s executive positions. As moviegoers, the most we can do is support these films and cross our fingers that Selma takes home Best Picture.

diversity selma oscars
Despite Initial Vote, BC Moves To Cover Full Cost Of Attendance For Full Scholarship Athletes
Accepting Both Poles Of Life