Home » Not Enough Is Good Enough 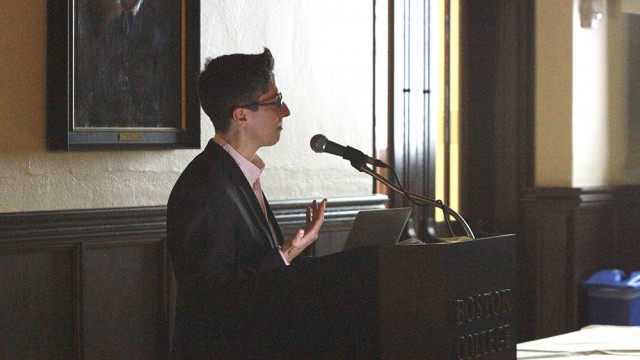 Not Enough Is Good Enough

I anxiously waited in line, clutching my copy of Alison Bechdel’s Fun Home while contemplating the perfect way to introduce myself. Hand shake or no hand shake? Should I ask her a question about the book? Or just compliment her endlessly? “Thank you so much for coming, Alison (or Ms. Bechdel?). I’m such a fan of your work.” Nah, too cliche. Obviously I’m a fan of her work—why else would I be here?

These are the questions I asked myself last Wednesday night, after cartoonist Alison Bechdel presented as part of the Lowell Humanities Series. Bechdel is known for her comic strip Dykes to Watch Out For, in which she coined a rule about gender bias in film and fiction, now known as the Bechdel Test. A film that passes the Bechdel Test must fulfill three criteria: it has two female characters, who talk to each other, about something besides a man. She has also published two graphic memoirs, Fun Home: A Family Tragicomic and Are You My Mother? A Comic Drama. Most recently, she was awarded a 2014 MacArthur Foundation “genius grant.” You can see why I was struggling to find the right words.

Not only was I about to meet a writer/artist whom I admired, but this was also the first time I’ve ever had a book signed by a published author—a personal victory. I have listened to plenty of writers as part of the University’s Lowell series, but last Wednesday was the first time I had actually read and owned a book written by the speaker.

The Lowell series is one my favorite set of events that the University offers, but it can be frustrating at times. As a self-proclaimed lover of words, it’s hard for me to attend all of these lectures by various writers without having read their work. I go for the experience, for the words of advice, for the occasional writing jokes—but I can’t help but feel as though I’m a fraud at some of these lectures. If I’m not a true fan of their work—as I asked myself at Bechdel’s lecture—then why else would I be there?

This fear of not being “well-read” enough translates to many other moments of my college experience. It happens during class, when the professor poses a question to the class, and I don’t feel smart enough or brave enough to give my own response. It happens when I’m applying for post-grad jobs (shudder), and I don’t feel qualified enough for various positions. It even happens among friends—some of them will be intensely debating a topic, and I just don’t have enough knowledge to contribute anything. I can’t help but define myself by the people around me, and these moments lead me to ask myself: Why am I really here?

Surprisingly, Bechdel also had her “not enough” moments. At Wednesday’s talk, a projector stood at the corner of the room, onto which Bechdel showed her college lit essays (with lots of red pen markings and grades ranging from C’s to B’s) and rejection letters from various publishing companies. Bechdel admitted that she may not be the best writer or the best cartoonist, but when she puts her words and images together, that’s when the magic happens. Bechdel’s story made me realize: we tend to focus too much on being great at everything, instead of combining the skills we do have—no matter how “not good enough” they may seem individually—in order to create something truly amazing. I may not speak up all the time, and my knowledge may be lacking, and I may not be well read. But I listen well, and I read well, which allows me to write—and that, my friends, is why I’m here.

As I stood in line on Wednesday, I was reminded why I’m at Boston College—to be among others who love words (and the people who create them) just as much as I do. I’ll admit that my “not enough” conscience threatened to surface: I was proud to own my copy of Fun Home, but it seemed meager in comparison to the person in front of me holding three of Bechdel’s books. For once, I didn’t let it get to me. Bechdel’s talk had renewed my confidence, and I was ready to make an insightful remark as she signed her name in my book.

“Is this for you?” she asked me, as I handed over the book without a word. I nodded and smiled—anything I had prepared completely escaped my mind. I told her my name, spelled with two l’s, not one. “Ah, a traditional Michelle,” she said. “Yeah, I’m always suspicious of a Michele with one ‘L,’” I replied.

Alison Bechdel chuckled at my lame attempt at a joke. “Yup,” she said, handing my book back to me. “I’m right there with you.”

bechdel
Published Professors: Song Discusses Race Dialogue In ‘The Children Of 1965’
Love In The Time Of The BC Bomb Threat